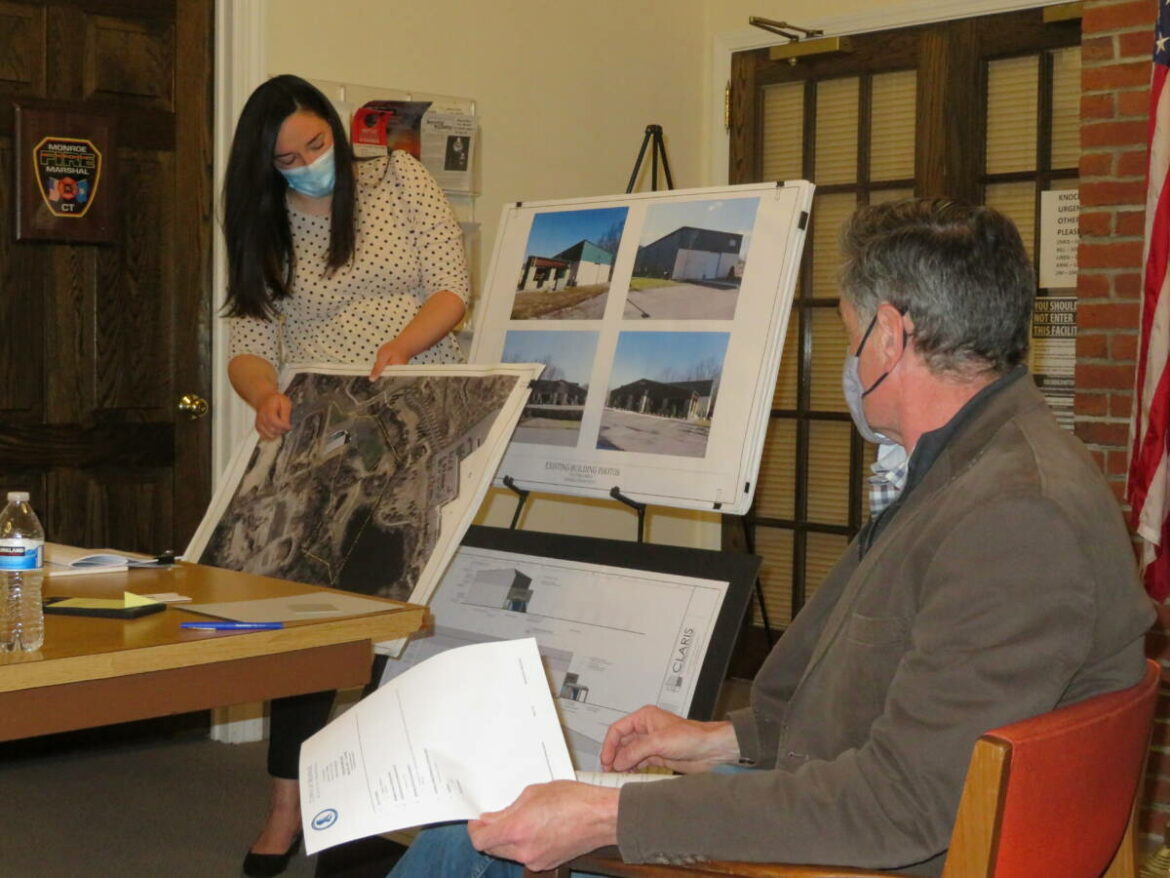 Mary Blackburn, an engineer with Solli Engineering of Monroe, presents the site plan for the proposed expansion of Olè Soccer, 5 Victoria Drive, at the Monroe Architectural Review Board meeting Tuesday.

MONROE, CT — Olè Soccer is proposing a 22,340-square-foot expansion of its sports facility at 5 Victoria Drive to house an indoor lacrosse field with bleachers, a small mezzanine, locker rooms and bathrooms.

Phil Clark, an architect with Claris Construction, designed the project, which the Newtown firm will also build. He said the indoor facility will be a box lacrosse field.

“It’s like a hockey rink with artificial turf,” he explained. “The owner was a professional lacrosse player. It’s his passion.”

Clark spoke before the Architectural Review Board at Town Hall Tuesday and Mary Blackburn, an engineer with Solli Engineering in Monroe, presented the site plan.

Olè Soccer currently offers indoor and outdoor fields at its facility at 5 Victoria Drive for training and tournaments and its jungle gym has slides, tunnels and a climbing tower among its fun features. The business must apply to the Planning and Zoning Commission for a special permit and site plan approval for its proposed expansion.

The ARB, which is an advisory board, will send a letter of recommendation to the commission, so its members can consider the board’s input when presiding over the zoning application.

Blackburn said half of an existing outdoor recreation field would be used to accommodate the new building and parking, which would include gravel overflow parking surrounded by a split rail fence.

Blackburn said 14 trees from the existing parking lot will be transplanted with other landscaping, which will include new plantings of native trees and shrubs.

The proposed improvements also include three new light pole fixtures that would match existing ones on the site.

Clark said Olè Soccer’s existing metal building is 12,000-square-feet with a stone veneer at the main entrance and horizontal, natural wood siding. Its colors are off-white and green.

He said the new metal Butler building will match the stone of the existing facility and the siding would be made with Trespa, a resin material resembling wood that is maintenance free.

Instead of being off-white and green like the existing building, because the new one is larger, Clark is proposing a two-tone color scheme that is off-white at the bottom and gray above, because he said gray would attract less attention than the green.

Cathleen Lindstrom, an ARB member, said she would like to recommend that the front of the existing building also be gray and off-white. Clark appeared willing to accommodate that.