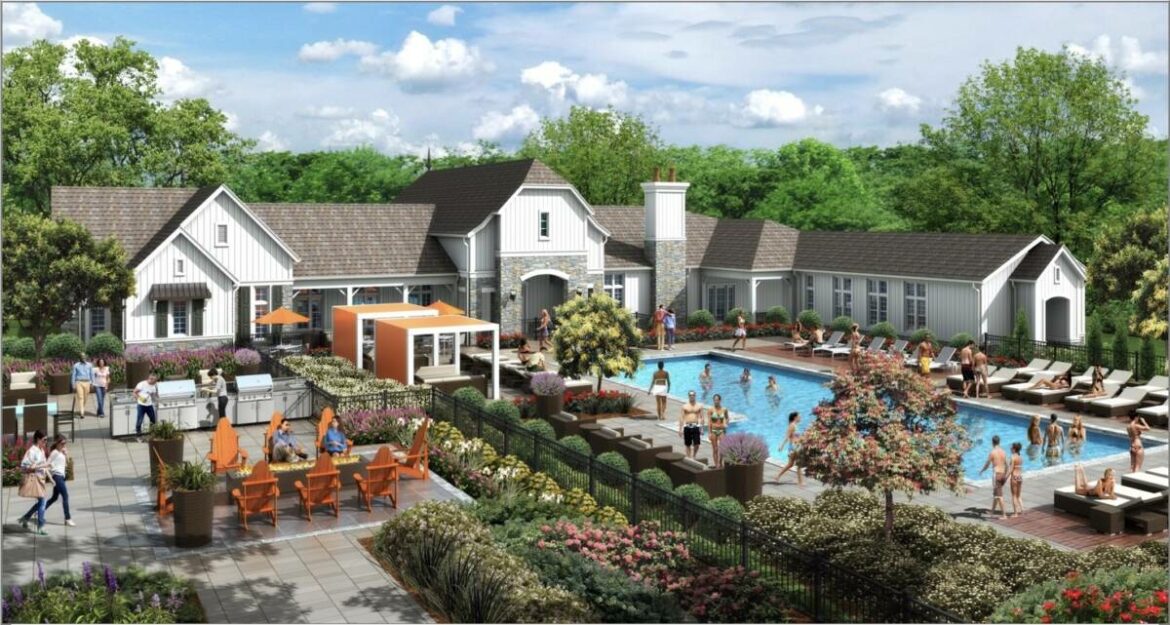 MONROE, CT – Pictures of upscale apartments with high ceilings and common areas that include a club house, a swimming pool surrounded by lounge chairs, cabanas and umbrellas, a putting green, a fire pit and an outdoor fireplace are what one might expect to see in a brochure for a luxurious resort.

However, the pictures shown at Thursday’s Monroe Planning and Zoning Commission meeting shared the vision for a 188-unit apartment community at 127 Main St. A gated community with eight three-story residential buildings housing one and two bedroom units, each with nine-foot ceilings and amenities such as kitchens with quartz countertops and islands. 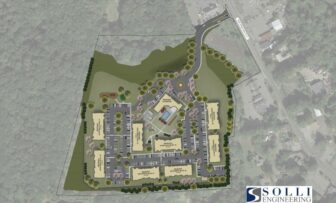 Founded over 50 years ago, Continental Properties has built over 25,000 homes throughout the country, including Connecticut, New York, New Jersey, Florida and California.

Though the Pond View proposal is for luxury apartments, the community would include 10 percent deed-restricted affordable units.

Connecticut has a goal requiring every municipality to set aside 10 percent of its housing stock to meet the state definition of affordable. Currently, 1.45 percent of Monroe’s housing is affordable. The Pond View plan would add 19 affordable units.

The plan is the first application of its kind before the Monroe Planning and Zoning Commission, which recently approved a Main Street Design District allowing property owners more flexible uses on their lots.

The MDD is a zoning tool giving the town more control over how properties are development. The commission can decide what uses to allow, then work closely with developers on the details of their site plans.

Pond View LLC wants to build the apartment community at 127 Main St., a property with a driveway next to the Dunkin’ Donuts and Baskin-Robbins building. The site has a previous approval for a shopping center. 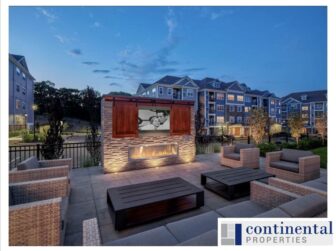 Pond View LLC applied for an SDD (special development district) in the Main Street Design District (MDD) overlay zone. If it is approved, the developer will come back with a detailed site plan for the apartments. 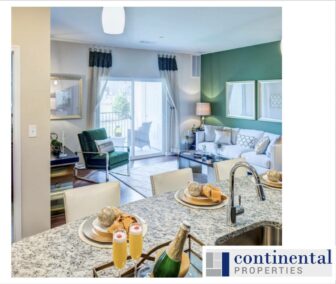 Rappaport said the Pond View community would have public spaces for socializing with a dog park, a golf simulation room, fitness and gathering spaces, a club room, cinema room and billiards room.

“We’re not only committed to building and developing communities, but operating it in a responsible manner,” said Rappaport, who still owns 21 communities Continental Properties built. “There is always one constant contact, which is me.”

Kevin Solli, principal of Solli Engineering in Monroe, is the engineer for the project. While the site would have 53 percent impervious coverage from the shopping center that was approved, Solli said the apartments would reduce the impervious surface to 35 percent, which is better for drainage.

There has been blasting on the site, while grading it for construction. 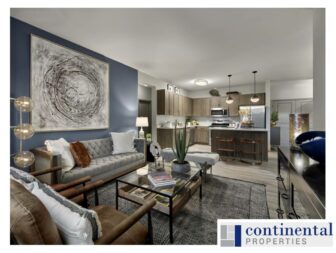 “All earthwork being done on the property is in accordance with the shopping center plan, but we’re ensuring the work being done will allow this plan to slide into place,” Solli said of the apartments.

If the apartments are approved, it would result in a 10 percent reduction in earthwork, shortening the time frame needed to level the property, Solli said.

The apartment community would have 380 parking spaces and Solli said the layout allows for a safe flow of vehicles. The site would also have sidewalks throughout.

Solli said the site would be recessed down, keeping the community contained from the surrounding areas. “We’re kind of down in a hole,” he said, “far less impactful than something built on the existing grade.”

The property would have underground utilities from Route 25 and each building would have its own septic system. Solli said testing was performed on the site with the Health Department in a process that included 100 test pits. He said the site has “very good sand” to accommodate septic flow.

Testing was done working with the sanitarian, the Connecticut Department of Public Health and Sabrina Keillor, the widow of Jay Keillor, a well-known developer in town who had gotten approvals for the shopping center before the current effort to build apartments there instead. 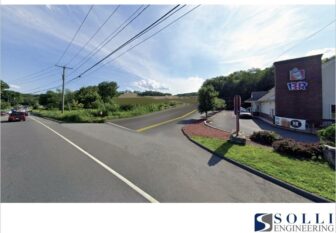 The main entry drive will go uphill, restricting the view from Main Street with trees planted along the route, before it opens up to a grand entrance with a rotary, artwork and perennials.

Planting islands will be plentiful, breaking up the asphalt of the parking areas with shade trees. Blackburn said tall shrubs will be a transition from the parking lots and sidewalks to the buildings.

Much of the site is surrounded by wetlands, state property and Aquarion Water Co. land, providing natural buffers that Blackburn said would be reinforced with evergreens and other plantings, screening the property from Main Street.

She said the proposal is consistent with the town Plan of Conservation and Development (POCD), which has a goal of pursuing more mixed-use developments with housing in commercial districts, expanding housing choices while attracting young professionals and empty nesters. 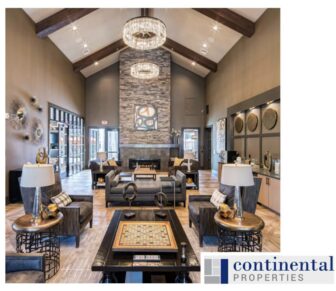 Stanley Gniazdowski, CRE, CCIM, president of Realty Concepts Inc., which is based in Guilford, shared an analysis of how the project could impact the town and surrounding area. The study was done on January 7, 2022.

The impact of the Covid-19 pandemic forced an increase in demand for single family housing and apartments in Fairfield County and the state, according to Gniazdowski.

Though most of Monroe’s housing consists of single-family homes, an aging population, and senior lifestyle change preferences, led to increased demand for senior living options like market rate apartments, he said.

New apartment communities would allow current residents to stay in Monroe, retaining their “medical, cultural, and religious linkages,” while also providing an option for younger people that did not exist, the study found.

If the Pond View apartments were already built, in existing market conditions it would produce a positive net tax revenue of about $863,000 per year for the town, according to Gniazdowski. 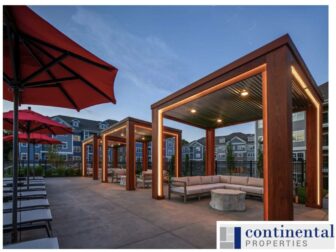 Gniazdowski’s impact study included an estimate of 17 children at the new apartments, a number he said could always fluctuate.

Nicole Lupo, a commission alternate who also serves as PTO president for Stepney Elementary School, had concerns over the estimates for students and costs for the school system.

Vice Chairman Bruno Maini asked if Solli would propose having a traffic light at the entrance from Main Street. Solli said the impact on traffic during peak hours would not warrant a traffic light.

However, Solli said Connecticut Department of Transportation permits will be needed, because Route 25 is a state road, so the developer will have to comply with any DOT requirements.

The driveway would be widened with a left turn only lane, according to Solli.

Maini asked if lighting is proposed along the driveway. Solli said there would be lighting that is Dark Sky compliant. Maini said he wants to see what that would look like.

He then questioned whether 380 parking spaces are enough to accommodate residents, visitors and employees. Rappaport said they follow a formula to calculate the number of parking spaces and 380 should be enough. 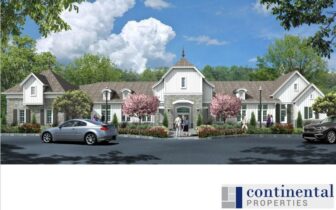 Maini said the numbers do not add up in his estimation and he would hate to see an approval for a beautiful facility be marred by Facebook comments from residents complaining over a lack of adequate parking.

Commissioner Leon Ambrosey asked if sidewalks are proposed in front of the property, along Main Street. Solli said no, though the commission could require it.

Ryan Condon, the commission secretary, said he likes the idea of having sidewalks in front of the Dunkin’ Donuts and Baskin Robbins, so residents can walk there for ice cream and have pedestrian access to other businesses.

Condon asked if the three-story apartment buildings would have elevators or be walkups. Solli said there would be no elevators. “That would be a burden on the EMS,” Condon said.

Lupo expressed concerns about people who cannot walk up flights of stairs, whether they are elderly or had surgery. “I would love to see elevators added,” she said.

Rappaport said those who have trouble with stairs would most likely look for units on the first floor. “We can’t add elevators without changing the orientation of the buildings,” he said. 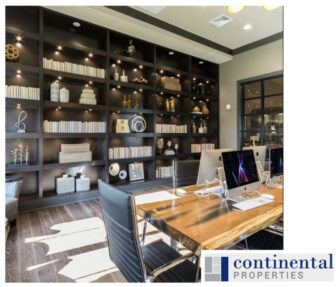 In response to a question from Condon, Rappaport estimated that 10 percent of the apartment community’s population would comprise of Monroe residents who moved there to remain in town.

Dominic Smeraglino, a commission alternate, asked if there would be a maximum number of residents per unit. Rappaport said there is a limit, which is closely monitored and enforced.

Solli said the plan includes another exit leading to Judd Road, where drivers could use the traffic light to turn left onto Main Street.

Planning and Zoning Administrator Joe Chapman asked about subletting units. Rappaport said it is not allowed, adding, “we enforce against it aggressively.” 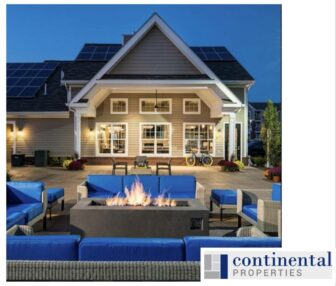 During the public comment portion of the hearing Ron Bunovsky Sr. expressed concern over septic capacity on the site, as well as who maintains and monitors the systems for proper function.

Bunovsky, a Monroe resident of 50 years, said the system at High Meadows has failed, overflowed and is under redesign because, he said, too many units compromised its capacity.

He said failures of community septic systems are a prevalent problem in town.

Bunovsky also asked where the snow would go when plowing is done. “There doesn’t seem to be a place to push it,” he said.

Solli said exhaustive testing was done to determine septic capacity and each system is registered with the Connecticut Department of Public Health.

When the hearing is continued on April 7, Solli said the applicant will address parking, surplus parking, sidewalks on Route 25, noise attenuation between units, the lighting plan, the Judd Road access and snow storage areas.