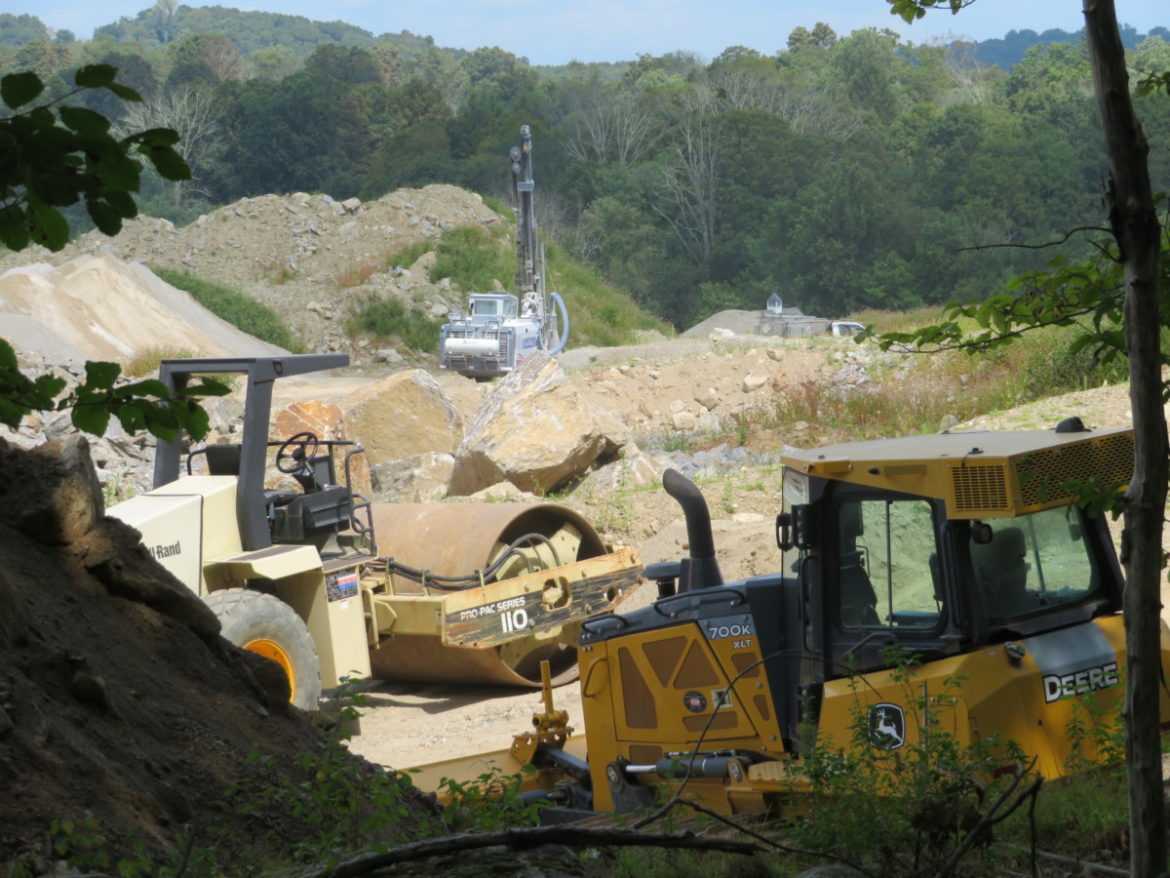 Rockhead 25 is working to level land at 127 Main St. to make way for a future development.

MONROE, CT — A horn sounded in a residential neighborhood on Little Fox Lane around noon on Monday, Aug. 24, before an explosion could be heard in the distance. When work crews preparing a commercial property at 127 Main St. for development aren’t blasting, there is a steady of jackhammering sound of rock crushing.

Jon Fontneau, of Laurel Drive, was driving down the street in his SUV, when he slowed to a stop to talk to a neighbor taking a walk.

“That was some blast today,” Fontneau said through his open window. “My house shook.”

The Sun interviewed seven residents living on Laurel Drive and Little Fox Lane and Fontneau was the only one who agreed to speak on the record.

Aside from their desire for peace and quiet, neighbors living near the worksite are concerned over the potential impact underground blasts could have on their wells and the foundations of their houses.

However, Zoning Enforcement Officer Joseph Chapman said the developer, Pond View LLC, has town land use approvals to excavate and prepare the property to make way for construction of a grocery store-anchored shopping center behind the Dunkin’ Donuts and Baskin-Robbins on Main Street.

The application was approved in 2006, but legal battles with opponents of the development tied the work up for 13 years. When the late Jay Keillor, who owned the property, was ready to resume the project, Pond View hired Rockhead 25 LLC, a New Canaan firm, to do the excavation work.

“It’s a big mountain,” Kevin Solli, an engineer with Solli Engineering LLC, had said of the nearly 20-acre-property. “The application calls for lowering that mountain on the level of Dunkin’ Donuts.”

Arnold Karp, a principal of Rockhead with Paul Stone, said he wants to do the work as quickly as possible, adding he hopes they can finish the job within two-and-a-half years.

Blastech, Inc., a Plantsville firm owned by Andy Nagy, will do the blasting. Solli has said blasting is the only way to remove all of the rock within the three year deadline. In November, he said Rockhead anticipated two to four blasts per month.

However, several neighbors say the pace has picked up since a brief stoppage in the spring, with as many as two to three blasts a week. But Chapman said the developer can blast as much as the application requires — and no more than that.

Solli has said blasting is a highly regulated process, which involves the fire marshal. A permit is needed from the Connecticut Department of Energy and Environmental Protection, and the site must be managed to ensure there is no sand or soil erosion and that sediment does not go into waterways when it rains.

Blasting can only be done Monday through Friday, between the hours of 10 a.m. to 3 p.m. Before a blast, a notification must go out to neighbors.

Fire Marshal William B. Davin said he issues blasting permits through his office and sends copies to the blaster and to the State Fire Marshal’s Office, adding the permits are good for a month, before they must be renewed.

Blastech’s permit for Pond View is the only active permit in town right now, according to Davin. 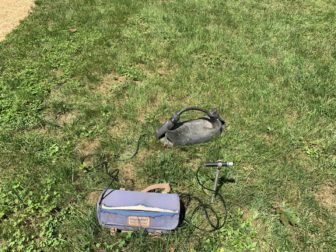 This seismograph measuring blasts at Pond View is set up in the backyard of a neighboring property.

“They have seismographs out that register the vibration in the ground and the air — and they’ve been well within the allowable limits,” Davin said. “My office and the State Fire Marshal’s Office see the reports regarding any complaints.”

Whenever Davin receives a complaint after a blast, he said he requests the reports.

Blastech makes a pre-blast phone call to roughly 30 homeowners the day of a blast, so they have a heads up, according to Davin, who said the company takes the extra step of notifying some homeowners living outside the blast zone.

One neighbor said, “the calls are nice. It’s nice to get a heads up, but it still startles the bejesus out of you.”

Some say the intensity of the blasts vary with lower level blasts and explosions that make their houses shake and scare their young children and pets.

“It’s not that I don’t feel for the neighbors,” Karp said. “It’s the only way to do what we need to do. We let them know. If there was a way to do it where we didn’t have to blast, we would be on top of that.”

On Aug. 24, one neighbor said she was told the blast would be sometime between noon and 2 p.m., though some want the times to be narrowed down more than that.

At the November meeting, John Kimball, a local developer working with Rockhead, told residents living within the blast zone they should allow the company to do a pre-blast survey of their homes to document the condition of the foundations and their wells. He said it is for their benefit and encouraged anyone who did not have one to share their information, so a survey could be scheduled.

Solli told gave neighbors a list of cellphone numbers of people to call should they ever have concerns. “They want to make sure you’re happy,” he said. “Call them any time of the day, seven days a week.”

Residents who spoke to The Sun said they want something in writing ensuring the developer would reimburse them for any damage.

“In the 15 years I’ve been doing this, I’ve never come across any well or septic damage,” Davin said of overseeing blasting in town.

Nagy did not return a phone call for comment, but Davin has interacted with him and his company often over the years.

“Blast Tech, they’re a very professional company,” Davin said. “The owner is a phone call away. I’ve gotten complaints from people and he’s been on the site and visited people with me. He’s not hiding from anybody. He’s a top shelf operator. He takes all complaints seriously.”

Davin said he has received and followed up on three complaints about Pond View, mostly about the noise.

While the blasting is less frequent, the rock crushing is constant. One neighbor said the operation starts at 7 a.m. and ends by the late afternoon to the early evening. Saturdays are shorter and no work is done on Sundays.

Several neighbors say the rock crushing is so constant during the day it has become “background noise” for them, and another said she can use the quarry as her alarm clock.

During the neighborhood meeting in November, Karp said his firm was hired “to take down a mountain to just above street level,” adding they would use “state-of-the-art equipment” that is quieter with dust control.

One resident conceded the newer equipment is not as loud, but said it is still loud, comparing it to the difference between “insanely loud” and “extremely loud.”

“Regrettably, that’s the nature of rock crushing,” Karp said. “We do everything we can to take the decibels down, but face it, blasting rock, then grinding it down, it’s just a noisy operation.”

When will it all end?

Fontneau thought of things the developer could do to make things better for him and his neighbors and said, “an end date would be nice.”

Karp said he lives near someone who has been building a house for three years, so he is sympathetic of the Pond View neighbors’ frustration.

“We’re trying the best we can to keep the noise down,” Karp said. “I certainly understand. The sooner I can finish, the sooner I can be out of there. I’d love to say, ‘geez, we’re ahead of schedule and don’t have to blast.’ We’re on schedule.”

Kellogg and Davin both said the blasting and rock crushing is likely more of a disruption with COVID-19 causing more people to work and attend school from home. Kellogg said the town will do all it can to ensure everything is done right.

The first selectman said, “we’re all looking forward to this work being done, so the property can be developed and the inconvenience to the neighbors can be concluded.”