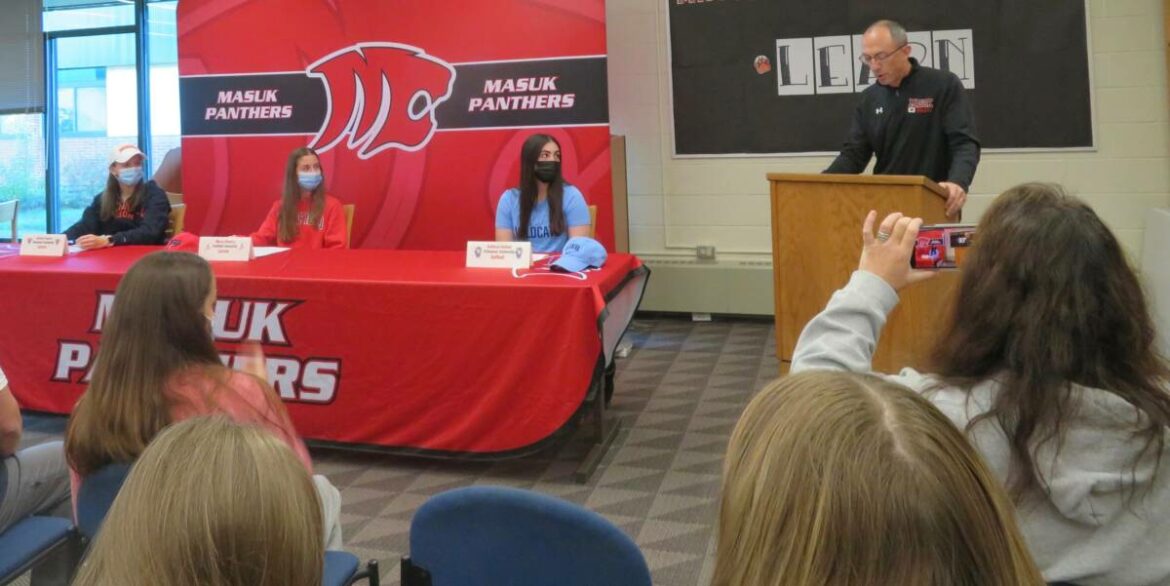 National Signing Day was held in the Masuk library Wednesday afternoon, during which Gallant signed her letter of intent to attend the University of Villanova, Pagano signed for Bucknel University and Henry for Fairfield University.

“As athletic director, I would like to thank them for all the wonderful memories they have provided in their four years at Masuk High School,” John DeGennaro said from the podium.

Turning to the three young women beside the podium, who sat at a long table adorned in Masuk red and white, he said, “you have conducted yourselves with class and dignity and serve as tremendous role models for younger student athletes to follow. It has been a true pleasure.”

Coaches, family and friends filled rows of seats and stood among the small crowd that gathered in back of the room.

Before Henry, Pagano and Gallant signed their letters of intent for their respective schools, their head coaches got up to say a few words about each of them. 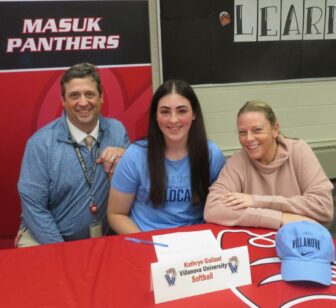 Masuk Softball Coach Leigh Barone reminisced about Gallant’s career, which has one more season to go.

“When Kat came to us as a freshman, we knew she would become the player she is today due to her work ethic,” Barone said. “She strives to become a better player, both offensively and defensively, everyday.”

As a junior, Gallant led the Panthers in hitting with a .532 batting average, 42 hits and 33 runs batted in. On the pitcher’s mound, she posted a perfect record of 21 wins and no losses, struck out 273 batters in only 130 innings, and had a 0.27 earned run average.

In two seasons — one was lost to the COVID-19 pandemic, Gallant was a key part of a team that amassed a 50-1 record, while winning two SWC championships and two State championships.

“Even bigger than the talented athlete she is today is the person she is every day,” Barone said.

Barone told the story of a phone call she received from an opposing coach following Masuk’s win over Notre Dame-Fairfield in the SWC Championship game last season.

“We won 2-1 in the bottom of the seventh inning when Kat was hit by a pitch to score the winning run,” Barone said. “The other pitcher was just a freshman, and Kat knew how upset she was at the end of the game.”

“Instead of running over to celebrate the win with the team, she went over to talk to the other pitcher to let her know how impressed she was with how much she was able to accomplish in that game at such a young age,” Barone said. “This just describes what kind of person Kat is. She is the definition of a team player and I cannot wait to see what she is going to do her senior year as a leader of the Masuk softball team.”

Barone told Gallant how proud everyone is of her accomplishments on the field and in the classroom. “You have been such a pleasure to coach over the past three years and I’m upset our time was cut short,” she said. “We wish you the best of luck as you continue your career at Villanova. Go Wildcats.” 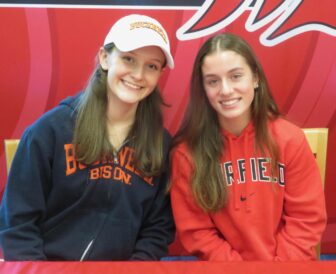 Masuk lacrosse standouts, from left, Juliana Pagano and Mary Henry, are among their school’s star athletes who will play Division 1 ball after they graduate.

Masuk Lacrosse Coach Rob Troesser noted how all three athletes are accomplishing so much in only three seasons, because of the pandemic.

He spoke of how his players, Henry and Pagano, are both All-State and All-Conference athletes.

“All-State, I think that award in itself — great award, but it doesn’t characterize who Mary and Juliana really are,” he said. “They’re beyond that. It is one of many awards they are gonna receive in life. It’s just a starting point.”

Troesser went on to praise Pagano for competing on the field at a high level, adding her desire to coach younger athletes makes her a special person. He said Pagano not only helps her teammates and friends, she also coaches young girls in cheerleading. 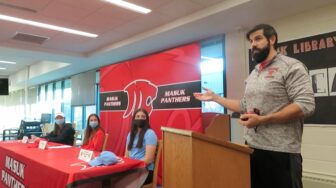 He said Pagano enjoys everything she does and her passion shows in all her efforts.

“She’s been a critical part of the success of the Masuk girls’ lacrosse team over the past three seasons,” Troesser said. “Her on-field presence goes beyond goals scored, the face-offs won and the turnovers caused.”

“Since her freshman year, she’s been able to rally the team around her when that extra spark is needed, which is a tough task being a younger player on the team,” he said of Pagano. “I’m privileged to have her be the captain of the team for two years and impart her passion to the team, as well as us as coaches. Juliana, thank you so much for your Masuk lacrosse efforts.” 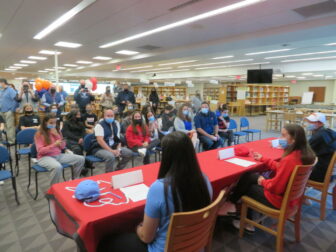 “I’ve known Mary before really Mary knew Mary,” Troesser said as laughter filled the room. “I taught the Henry girls at Fawn Hollow as a P.E. teacher and I’m lucky enough to coach them in lacrosse.”

He said Mary Henry has always been someone, who not only stands out for her talents, but also for her character on the field and in the classroom.

Of her personality, Troesser said Henry has a “general nature of being that extra special nice girl.”

“The sister aspect, the other three Henrys have a lot to do with her loving manner to her teammates,” he said. “I’m lucky to be able to teach her, as well as be her coach and see her shine in both aspects — not only in school on the field, but as a true student athlete all over the place.”

“I’m certain that we’re not finished watching her in her life endeavors,” Troesser continued. “Mary, congratulations on signing with Fairfield U. And thank you for your work with the Masuk lacrosse team.”

Masuk Principal Steve Swensen stood proudly in back of the room during the National Signing Day event.

“The talent of kids these days never ceases to amaze me,” he said. “Kat was instrumental in leading the softball team to the State title last spring and Mary Henry and Juliana Pagano will do the same for the lacrosse team in the spring.”

The Panthers having two Division 1 players on its team makes Swensen confident about their chances.