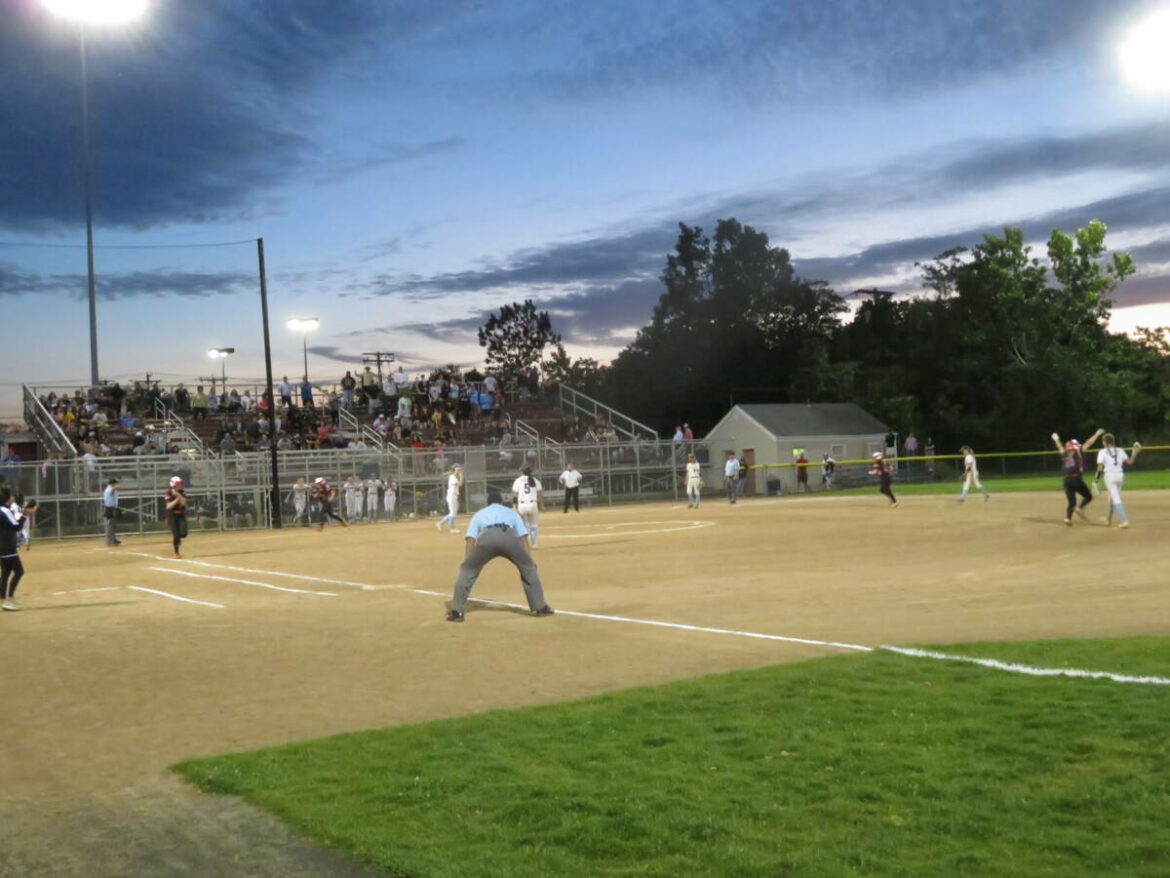 Kathryn Gallant is hit by a pitch with the bases loaded, forcing in the winning run for Masuk as Casey Halliday scores from third. The Panthers beat Notre Dame of Fairfield 2-1 to capture the SWC Championship at Frank DeLuca Hall of Fame Field Thursday.

STRATFORD, CT — MacQuarrie Stone-Folmar, of Notre Dame, tripled, then tagged up on a pop out, beating the throw at the plate for a score. The run put the 19-0 Masuk Panthers’ softball team in an unfamiliar position. It was the first time they trailed all year.

The 2-1 Masuk victory earned the Panthers their fourth consecutive SWC Championship, not counting last year, when the season was canceled due to the COVID-19 pandemic.

“None of them gave up, and to score that run …” Masuk Coach Leigh Barone said of how her players rallied from behind. “I heard them say, ‘we have to be disciplined, lay off the high and low pitches.” 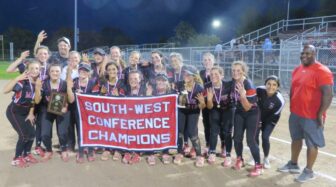 Notre Dame pitcher Judy Tarczali was dominant over the first five innings, holding the Panthers scoreless. In addition to inducing Masuk batters to swing at pitches out of the strike zone, Barone said Tarczali was jamming them inside.

“I think we started to adjust to her sequences and adjust to her pitches,” said Gallant, who was the game’s Most Valuable Player.

Kaitlyn Welch walked to lead off the bottom of the sixth.

Then Natalie Lieto tried to bunt her over to second base, but fouled off the first two pitches. Down 0-2 in the count, Lieto battled, fighting off several pitches before drawing a walk.

With one out, Jacie Hall was hit by a pitch, loading the bases. 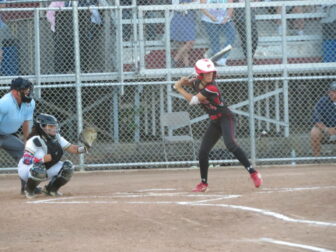 Natalie Lieto tries to get a hit for Masuk in the Panthers 2-1 victory against Notre Dame Thursday.

Emma West-Testo hit a sacrifice fly, allowing Welch to tag up and score, knotting the game at 1-1.

Gallant retired all three batters she faced in the top of the seventh, giving the Panthers a chance to win the game in the final frame.

Casey Halliday hit a single to lead off the inning. Then Ella Bunovsky laid down a bunt, moving Halliday into scoring position at second base.

Sarah Falcone cracked a single and Masuk had runners at the corners with one out.

Falcone stole second. Then Welch was hit by a pitch to load the bases.

Lieto flied out, but it wasn’t deep enough to bring in Halliday.

It appeared Gallant had won the game with a two-out-single down the third base line, but the umpire ruled that it was a foul ball.

Moments later, Gallant was hit by a pitch to force in Halliday for the winning score. 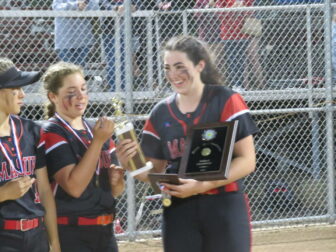 “We came in really excited and really hyped,” Halliday said after the game. “To get this done is really special. It’s our fourth SWC title in a row. I think it’s special to win it, not only for our team, but for the team that didn’t get to play last year.”

Halliday said the Panthers are a close knit team, who have each others’ backs.

“It was a close game. They gave us a tough fight,” she said of Notre Dame. “To get it done under pressure shows the strength we have as a team.”

Pitching, defense gets it done 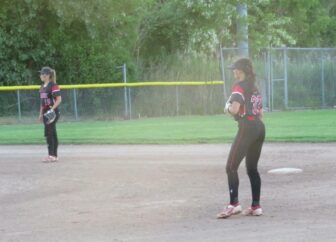 The Masuk Panthers’ star pitcher, Kathryn Gallant, benefited from the stellar defense of her teammates, including plays made by shortstop Kaitlyn Welch, left, and second baseman Jacie Hall.

Gallant, who was coming off a no-hitter against Pomperaug earlier in the week, pitched a complete game Thursday, striking out 10 batters and holding the Lancers to four hits.

Though she had a shutout going through the first five innings, Gallant got into trouble in the fifth. After striking out the first batter, Notre Dame hit back-to-back singles, before Idabella Brousseau drew a walk to load the bases with two outs.

Barone called a time out and huddled with her players on the mound.

Then Gallant got Riley Marko to ground out to second, ending the Lancers’ threat.

“I was just telling myself to trust my defense,” Gallant recalled. “I was walking people. I’m an outside corner pitcher and I wasn’t getting the calls.”

“This tournament, she just did phenomenal against Brookfield and Pomperaug,” Barone said of Gallant, “and today she never let the pressure get to her — especially when they were tightening the strike zone.” 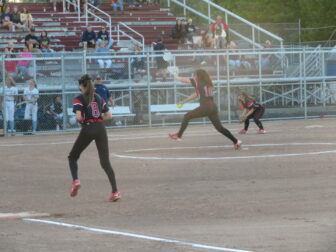 The Panthers made several great defensive plays to help Gallant out.

Among the plays, second baseman Jacie Hall made a diving catch of a line drive in the second inning.

After Stone-Folmar led off the fourth inning with a single for the Lancers, Masuk catcher Izzy Viglione threw her out trying to steal second, teaming up with shortstop Kaitlyn Welch, who put down the tag.