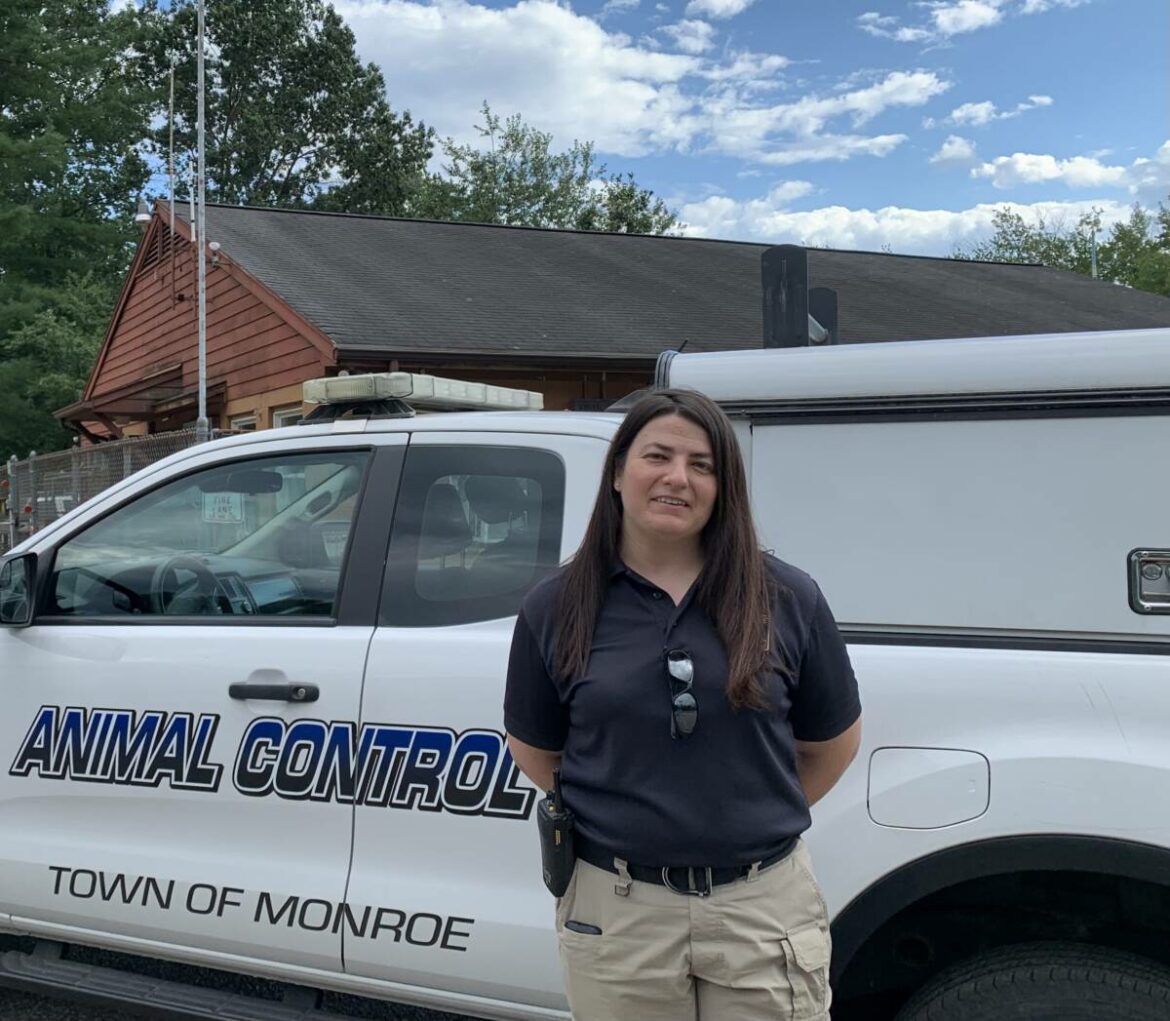 MONROE, CT — Gina Gambino had a variety of pets growing up in Bridgeport, with everything from birds to guinea pigs, but it was her love of horses that led to a career as an animal control officer.

“I took horseback riding lessons when I was 10,” she said. “I got interested in the agricultural world.”

Now 37, Gambino’s 15-year-year career took her to Monroe where she has served as a part-time animal control officer for the past three years. This summer, she was hired as the town’s new full-time ACO following the retirement of longtime ACO, Ed Risko.

“She has come to Monroe very skilled and versed in animal control,” Police Chief Keith White said of Gambino Thursday. “She will be an asset to the town.”

Gambino has worked at animal control agencies throughout Fairfield County and Western Connecticut, including in Bridgeport and Fairfield. She has also worked as a park ranger in Trumbull for seven years.

Aside from numerous calls involving dogs and cats, Monroe’s ACOs often respond to roaming cows and other farm animals.

In fact, since July 1, Gambino said she has responded to more agricultural calls than in the entire year she spent at Regional Animal Control, which covers the towns of Brookfield, Bridgewater, Sherman, New Milford and Roxbury.

In a congratulatory Facebook message to Gambino, Risko, who served the town for 47 years, said Gambino is only the third ACO to oversee the facility in Monroe since the position became full time in 1973. She works with part-time ACO, Teri Latulipe.

“It is a family oriented atmosphere,” Gambino said. “There is a culture at animal control. I believe it’s the same at other departments in Monroe. It’s very tight knit.”

Gambino’s mother, Kathy, worked in interior design and her late father, Joseph, had worked for the Bridgeport Housing Authority and was the city planner. Prior to that, as an architect, he designed the Carousel Building at Beardsley Park.

“That park was my connection to animals,” Gambino said. “My dad was a science oriented guy and it rubbed off on me. I loved science, biology and animals.”

When she was in middle school, Gambino said she wanted to explore going to school for agriculture. She was later accepted in the Trumbull High School Vocational Agriculture Program.

“I was involved with FFA, which exposed me to a lot of different professions you could pursue with agriculture and, believe it or not, animal control is considered an agricultural career,” she said.

After high school, Gambino earned a degree in animal science from the University of Connecticut Ratcliffe Hicks School of Agriculture.

At one time, Gambino said she considered law enforcement to be a more attainable profession for her, but then learned how animal control usually partners with police departments in the state of Connecticut.

In Monroe, Gambino said she is grateful to have worked with Risko. “I admired him. He has a much different outlook on animal control than a lot of other animal control officers,” she said of her predecessor.

However, Gambino is also eager to bring her own ideas and “a fresh set of eyes” to the position. “I’m definitely looking forward to putting my stamp on it,” she said of Monroe Animal Control.

Among her goals, Gambino said she wants to do more community outreach, to be more connected to other animal control agencies and professionals, and to have a stronger social media presence, though, she said that will not take the place of calling the office on Purdy Hill Road for assistance.

Gambino wants to hire two new part-time assistants at the facility. “I’m lucky to have had employees over the years who I’ve taught the job to, so I’ll be able to do that here,” she said.

Gambino said she has discussed possible changes with Police Lt. Michael Sweeney and Police Chief Keith White and met with public works to discuss the needs of the shelter, an old facility that has failed recent inspections from the state.

She remembers when her father helped rebuild the animal control facility in Bridgeport as city planner. “I learned a lot from him on that, because he really had to analyze the guidelines and requirements for a state approved animal control center,” Gambino said.

“I enjoy bringing a lot of the facilities I worked at up to speed,” she said.

In Bridgeport and at Regional Animal Control, Gambino said she brought animal welfare standards up to par, improving the care of animals in the shelters, the runs and operations.

“It’s similar to running a farm or a stable,” she said of animal control. “Ed said that before.”

Another goal of Gambino’s is to work with rescues for specific animals. For instance, she remembers how a rescue assisted Regional Animal Control in caring for 20 stray Treeing Walker Coonhounds and beagles after a house fire in Sherman.

“A breed specific rescue came forward and assisted us with these dogs,” Gambino said. “We also worked with the Connecticut Humane Society and other animal agencies. I would like to strengthen our resources to assist animals we bring in.”

Gambino lives in Bridgeport with her Chihuahua, Apple.

As an ACO, she said she enjoys being able to offer options to pet owners, who are struggling with difficult situations. For instance, making a referral for behavioral needs or finding a loving home for a dog whose living arrangements are not working out.

Gambino said she always sleeps easier on days when she has helped people solve problems.

“I like a lot of the experiences I run into on my job. The stories I can tell,” she said. “There’s a lot of humor in this job and connections you make with people, as well as colleagues.”