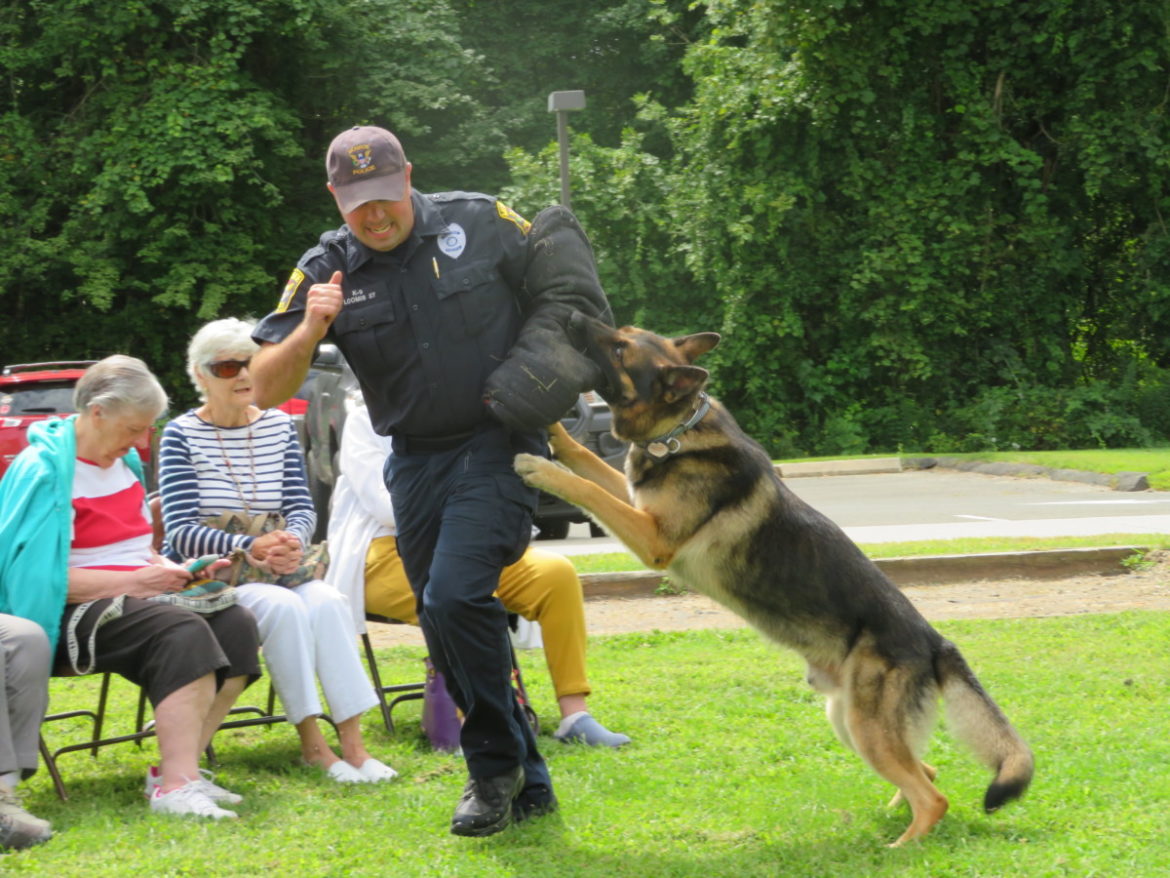 Monroe Police K-9 Officer Jeffrey Loomis can't free his arm from the jaws of K-9 Murphy during a demonstration at the Monroe Senior Center Tuesday.

Police K-9 officers Jeffrey Loomis and John McAulay brought their dogs, Riggs and Murphy, to the Monroe Senior Center for a demonstration Tuesday. Center patrons sat in folding chairs behind the building to watch the dogs sniff out narcotics and attack Loomis’ padded bite sleeve.

Whenever Murphy and Riggs obey their handlers and successfully complete a task, the dogs are rewarded with a toy.

“Sometimes you have to be careful. A dog will pretend to smell drugs, because it wants its toy,” McAulay said. “So, as a handler, you have to know when your dog is lying or fail your certification.”

Through their questioning of the officers, center patrons at the Triad sponsored program: Dog Days of Summer learned a dog that is trained and fully equipped costs $14,500 and that Riggs and Murphy have bullet-proof vests, though the animals can only wear the gear for short periods of time to breathe easier and avoid overheating.

Murphy is a German shepherd. McAulay, an Army veteran who served in Iraq, said he named his dog after Army legend Audie Leon Murphy.

Loomis’ partner, Riggs, is a Belgian Malinois with its own Instragram page.

A man who noticed how one dog was brought out at a time, asked if the two dogs are ever out together. Loomis said it is seldom, because both are alpha males and would fight for dominance. 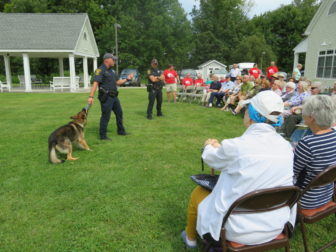 “He won’t listen to you if you say, ‘down,'” McAulay said. “He’ll look at me and say, ‘is she serious?’ He does it to my wife too. It’s easier for me to learn a dozen commands in German, than to teach Murphy commands in English.”

McAulay said the Monroe Police Department acquired Murphy at an event similar to the NFL draft. Demonstrations were performed with eight or nine dogs and the most senior handler got first pick.

McAulay said a friendly black German shepherd was taken first. “Farmington picked fourth and got a dog that wouldn’t bark,” he said, explaining how that town’s officers thought it would be nice to have a quiet dog in their patrol car.

“That dog later dropped out of the program, because it was afraid of the dark,” McAulay said.

Murphy was two-years-old when McAulay got him.

A nose for the job 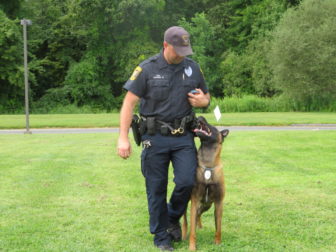 McAulay had Murphy walk alongside him on the grass and whenever he gave the order, the dog immediately stopped and laid down.

“We train twice a month, eight hours a day,” Loomis said. “Almost every day we’re doing something with the dog, whether it’s obedience or tracking.”

McAuley said their dogs sense of smell is 30,000 times that of a human. For example, he said a person could smell beef stew, but the dog would smell each ingredient individually, from the beef and carrots to the broth.

During a demonstration on a police cruiser, McAulay said even if there are no drugs in a car, the dogs can detect drug residue on a door handle. Sometimes its signal will be a subtle head turn, he said, adding an officer must be careful about pulling the dog along too quickly.

If a child goes missing, Loomis said they usually have the police dog smell the child’s pillow case to get the human scent.

McAulay recalled a fatal crash in Redding, where after police conducted a search of the scene for two-and-a-half weeks, they called Monroe’s K-9 unit for help.

Murphy went into bushes and dense prickers and found a soccer shin guard, a soccer cleat, the car’s head rest and the victim’s wallet within five minutes.

Never stare at a K-9 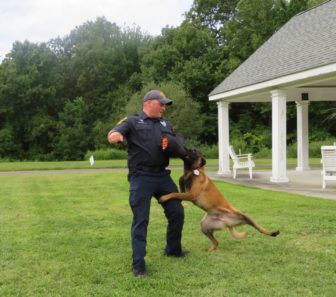 Riggs grabs K-9 Officer John McAulay’s leg, while trying to take him to the ground during a demonstration at the Monroe Senior Center Tuesday.

McAulay said a police dog will bite a fleeing suspect and take him to the ground and hold on until the suspect stops fighting. The dog will also attack if someone fights its handler.

It’s not the dog’s teeth that hurt most, it’s the pressure, he explained.

A dog will sometimes become fixated on the bite sleeve while training and just go for a suspect’s arm when on the job, but McAulay said their dogs have not had that problem.

However, when Murphy was younger McAulay said he had to restrain his dog at a fire scene because firefighters’ gear looks similar to the bite suit used in the dog’s training.

Loomis and McAulay both took turns wearing a bite sleeve for the demonstration, which both dogs participated in. McAulay taunted Riggs to get the dog worked up, before running away and being tackled.

“One thing about the dogs,” Loomis said. “If you stare at the dog for too long, you’re challenging that dog to a fight.”

K-9 officers don’t sic their dogs on suspects in every situation, according to McAulay, who said, “if a guy stole a candy bar from Cumberland Farms, I’m not going to let my dog go into the woods and tear him to shreds for it.”