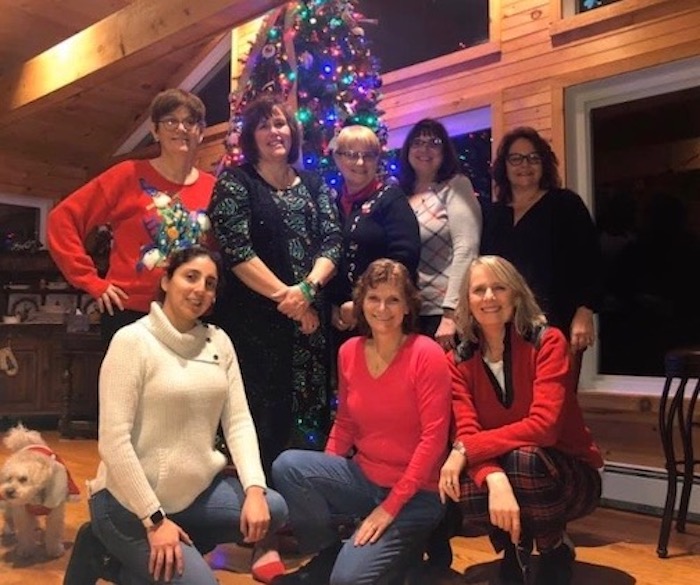 MONROE, CT — Christmas carols and a visit from Santa Claus will highlight the Monroe Women’s Club’s annual Tree Lighting at the gazebo at the corner of Fan Hill Road and Church Street this Saturday evening. It’s just one example of the nonprofit’s many contributions to the town in its 45 year history.

John Buck will emcee the event, which starts at 5 p.m. and will include performances by the Jockey Hollow chorus and the Masuk band. 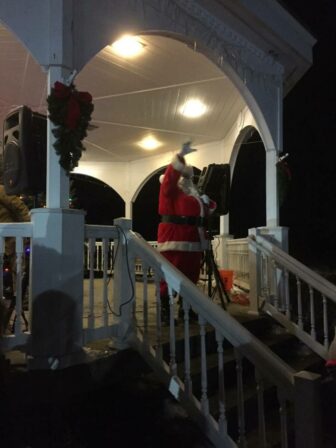 “It’s nice because everyone from the community comes together, depending on the weather,” said Mary Christian Hein, co-president of the MWC. “When Santa comes on the fire truck, it’s pretty exciting to see the little kids. The music is nice too. It puts you in the spirit at the start of the season. It puts you in the right mood.”

The motto of the Monroe Women’s Club, whose 45th anniversary was Wednesday, is “Community Service, Community Strong.”

In its earliest days, the MWC held a three day swim-a-thon in July of 1977 to raise $8,000 in pledges and gifts for the opening of the town’s new pool. 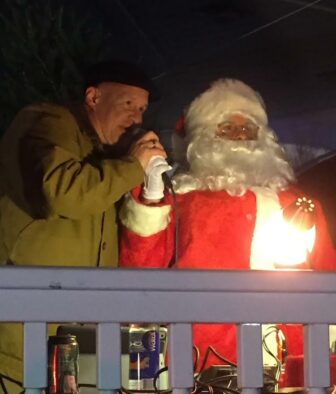 Among the local beneficiaries of the MWC’s philanthropic efforts over the years are the Monroe Volunteer Emergency Medical Service, the Monroe Scholarship Fund and the Monroe Playground Foundation to name a few.

Every year, Hein said the MWC buys gift cards to Stop & Shop and Big Y supermarkets through money it raises, and donates it to Monroe Community and Social Services for residents in need.

“We call it Adopt a Neighbor,” she said.

“We’re donating 30 plants, one for each of the condos at Fairway Acres in Monroe,” she said of the senior housing complex on Wheeler Road. “We did it last year and it was a big hit, so we’re doing it again this year.” 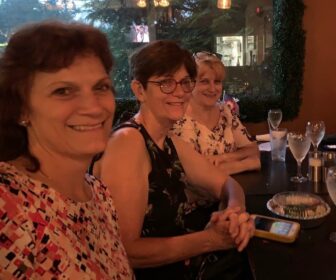 The Monroe Women’s Club had grown to at least 53 members in the 1970s but, like most volunteer organizations, membership dwindled over the years.

Adele Buck, who is co-president of the MWC with Hein, said the club had around 37 members when she joined 22 years ago. Now there are about a dozen.

“We’re kind of a small group, but we try to do as much as we can,” Hein said. “I like the camaraderie and it feels good to do things for others.”

Aside from co-presidents Buck and Hein, Deborah Heim serves at the MWC’s treasurer, Veronica Condon is its corresponding secretary, and Annmarie Hughes is the parliamentarian.

“I was new to town,” Buck said of when she decided to join the MWC. “I had been living in Monroe about three years and my daughter was three. I was dying for some adult company. I met a few women in town who were part of the club. They asked me if I wanted to come to a meeting and participate. I wanted to help out. I was like-minded with these women.” 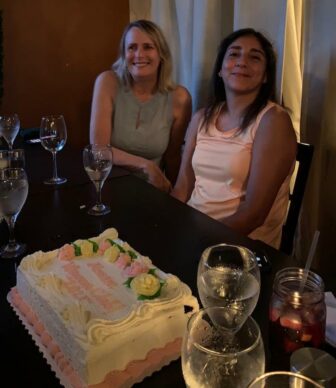 The community projects seemed overwhelming at first, but Buck said she got her feet wet by participating — later running projects and stringing together successful ones. “I think that can help your self esteem,” she said.

Both Hein and Buck said members are not pressured to head up a project, and can do as little or as much as they want. But whenever a member wants to do her first project, Buck said others are always willing to lend a hand throughout the process.

“It gives me a lot of purpose,” Buck said of the MWC. “I like to work with other club members. It’s nice to work outside yourself and give back to the community and I like to see the growth of other members too, as they gain the confidence and take the lead on things they might have thought were scary in the beginning.”

She said half the members have been part of the club for at least a decade.

“Club members get along very well,” Buck said. “We have a lot of rapport. If we have a big project, there’s always someone who will step in. I think one of the reasons we’ve stayed in this together so long is we’ve all become good friends.”

“Adele asked me to join,” said Hein, a member of at least 10 years. “Our sons were in Boy Scouts together.”

There is a $30 annual membership fee, most of which goes to the Connecticut Junior Women’s Club for liability insurance. New members receive a Monroe Women’s Club tote bag and a Polo shirt with their name on it, as well as a name tag to wear to club functions. 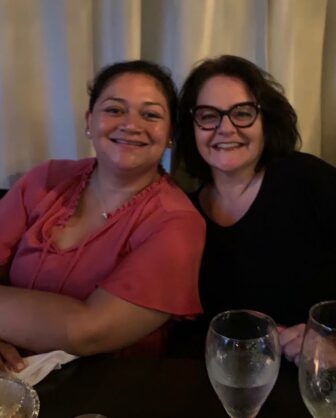 The Monroe Women’s Club meets once a month. Meetings were held at Good Shepherd Lutheran Church on Elm Street, but since the COVID-19 pandemic began, the MWC’s meetings, and some events, have been held remotely via Zoom.

“We had a holiday party by Zoom, so that was interesting,” Buck said with a laugh. “Some of us dressed up more than others and we had elf names,” she added of the elf-themed party.

Next Thursday, members are meeting in-person for a dinner at Monroe Social.

One advantage of the remote meetings is it’s easier for some members to make them amid other commitments, according to Buck.

“It was more fun with our comedy fundraisers and murder mystery,” Hein said. “That was fun.”

The pandemic has also affected how the MWC raises funds. Last year, the club raised $1,200 for the Monroe Food Pantry by selling birdseed bells online. Other sales include teacup gardens and bird feeders for Easter and Mother’s Day with advertising on Facebook. 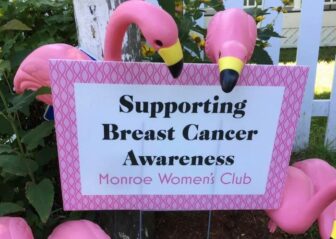 In the summertime, people can make a donation to have MWC members “pink” their friends and relatives by placing plastic pink flamingos by their mailbox. Proceeds go to Think Pink Monroe, an initiative to help town families dealing with breast cancer.

I the fall, people can buy a Boo Bag of goodies that MWC members deliver to the recipients.

“The Boo Bags were new this year,” Buck said, adding, “we did Spooky Flamingos instead of pink ones. They were three orange and three black flamingos with the sign, ‘you’ve been booed.'”

“Now we’re doing holiday bags for all ages,” she said. “Then Elf Bags for kids age 3 to 6, delivered by elves.” 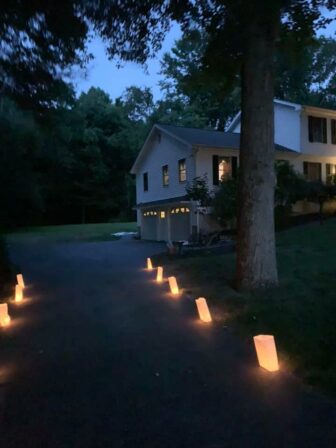 Monroe Women’s Club members have a Luminaria sale every winter, making for brilliant displays in town.

The elf-themed gift has an elf report card with the kid’s name and check boxes for whether they’ve been naughty or nice. Each one is signed by an elf, whose name could be something like Elf Twinkletoes, according to Buck.

“We have some signs, smaller ones customers can buy for $15 each,” she said. “One is ‘Elf Crossing’, another has an elf head and feet.”

Placing the elf’s feet behind the head makes it appear as if part of the elf is underground.  Though it comes with an Elf Bag, Buck said some people have been buying it for adults.

The club has had a bulbs sale in the spring and plans to do one next fall. Luminaria kits are sold in the wintertime.

A gift for the town

In honor of its milestone, the Monroe Women’s Club will donate an outdoor bulletin board to the Monroe Parks and Recreation Department. It will be on display at Wolfe Park, near the tennis courts. 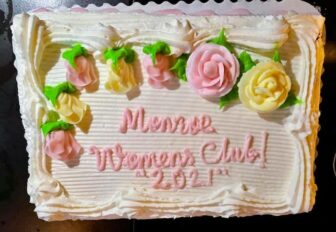 “We fully funded it,” Buck said. “There will be a plaque with our name mentioning it is the 45th anniversary gift.”

A dedication ceremony will be held after it is installed.

Prospective new members are welcome to join the club. Send an email to [email protected] inquiring about membership or to express interest in joining a meeting on Zoom. There is also membership information on the MWC website.

Hein said there will be no pressure to make a commitment.

“You can listen in,” Hein said of the meetings. “We try to be a welcoming group.”

“We would love to have new members,” Buck said. “It has to be a person who enjoys doing things, because we need people to take over projects. It would be nice to get new members and find people interested in doing something like this long term.”