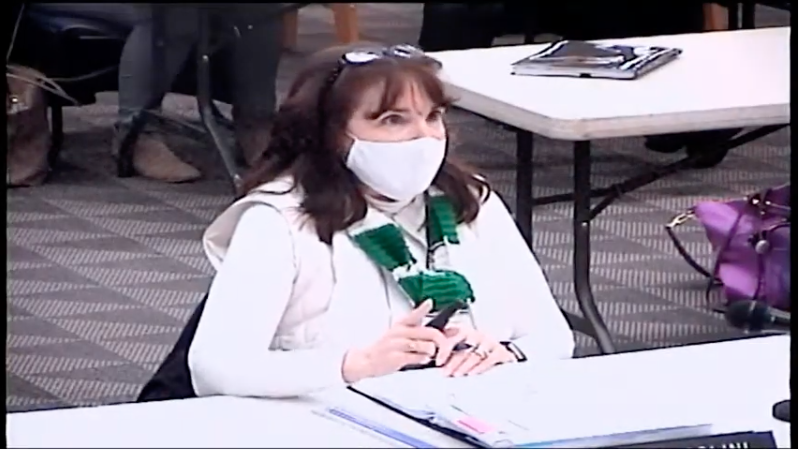 Sheila Casinelli, the English language arts coordinator for K-5 and director of instruction and professional development for Monroe public schools, presents her budget at a Board of Education workshop.

This article is the fifth in a series of stories from the Monroe Board of Education’s budget workshops. Board members are reviewing Superintendent of Schools Joseph Kobza’s $62.1 million proposal for fiscal year 2021-22.

MONROE, CT — Superintendent of Schools Joseph Kobza’s $62.1 million budget proposal does not include a teaching internship program for next year. A portion of the roughly $30,000 in savings will be used to hire substitute teachers.

During the Board of Education’s budget workshop on Dec. 14, Nick Kapoor, a board member, noted that 2021-22 will be the second year in a row that the district does not have the internship program, which he called a “pipeline” for new teachers.

“Many of our staff that we’ve hired over the years have been former interns, who have been in our district,” said Sheila Casinelli, the English language arts coordinator for K-5 and director of instruction and professional development for the district.

Jerry Stevens, a board member, said he benefited from having interns during his 34-year-career as a teacher in the Monroe school system. “I probably had 25 interns and we hired just about three quarters of them,” he said.

Kapoor asked the superintendent to consider bringing the program back in the future.

When Monroe had the program, Casinelli said the interns came from either Fairfield or Sacred Heart university at a cost of $16,000 to $17,000 per student, depending on the school. The money went to the university and the student would not have to pay tuition, while working for the school system for free.

Kapoor touted the familiarity that was developed between the interns, students and staff, providing for a seamless transition when one was later hired.

“It’s a year-long interview is what it is,” Casinelli said.

For every $16,000-plus not spent for an intern next year, Finance Director Ronald Bunovsky Jr. said $9,728 will be added to the budget line for substitute teachers.

Casinelli said she removed funding for the Wilson Training program, a systematic reading program that helps children with dyslexia, from the budget. But she hopes to be able to pay for it with a grant.

Teachers taking the year-long program become licensed Wilson teachers, which are in demand for teaching children with dyslexia, a growing need in the school district, according to Casinelli.

She said there is a Wilson trained teacher at Monroe and Stepney elementary schools and Jockey Hollow Middle School, with one teacher in the process of certification at Fawn Hollow.

Another program not funded in the budget is the da Vinci art program, which had cost just under $10,000. Casinelli and David Ferris, a board member, agreed it will be a loss.

Board of Education Budget Workshop Stories: