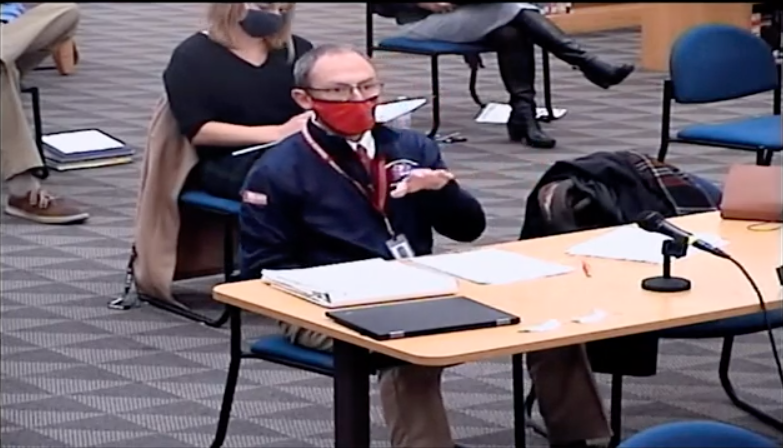 Masuk Athletic Director John DeGennaro presents the sports budget to the Board of Education at a recent workshop.

This article is the second in a series of stories from the Monroe Board of Education’s budget workshops. Board members are reviewing Superintendent of Schools Joseph Kobza’s $62.1 million proposal for fiscal year 2021-22

“I think it will be good. I expect a gate increase,” DeGennaro told the Board of Education at a budget workshop on Dec. 9.

“It was obvious to me, the loss of gate receipts this year,” said David Ferris, a board member. “I’m with you. I think that’s going to bump next year. People are dying to get out. That loss of revenue was notable. It’s worth noting.”

Ferris also noted the loss of revenue from renting the pool and the auditorium. “That’s been an issue that’s affected us this year,” he said.

DeGennaro said the main drivers in the 2021-22 sports budget includes 43.6 percent for stipends, 9.5 percent for transportation and 8.4 percent for officials.

“We have to separate those football jerseys, because its expensive,” DeGennaro said of the red and white jerseys.

Uniforms are replaced in a five-year purchasing plan, which fluctuates depending on the type of uniform the school is buying in a particular year, according to DeGennaro. For instance, he said cross country may be less than basketball and football uniforms.

As a safety measure, DeGennaro said $1,500 will be spent to recondition boys lacrosse helmets that were bought last year.

A new baseball pitching machine is included in the $4,774 equipment and game supplies budget.

“In my tenure, I’ve been here since 2005, we haven’t had a new one,” DeGennaro said. “I don’t know if that was purchased since I’ve been here in 1999. We need a new one. The balls are going in a lot of different directions and we need one that actually throws baseballs, as opposed to plastic balls.”

Other drivers in that budget are a softball protective screen for batting practice and a volleyball coach’s stand with a feeder.

DeGennaro said volleyball coaches currently stand on plyometric boxes and other things they can find to get above the net, where they toss balls onto the court, allowing players to practice their skill work. The volleyball coach’s stand and feeder allows a coach to safely stand above the net and be fed volleyballs.

Costs for things such as police and crowd control game staffing remained flat.

Nick Kapoor, a board member, asked if games will be played this January and February. DeGennaro said he’ll know more about dates for the winter, the possible alternative season and the spring season after the Connecticut Interscholastic Athletic Conference Board of Control meeting, which is scheduled for Jan. 7.

He said the CIAC board is paying close attention to data on the pandemic from the Connecticut Department of Public Health before having its January meeting.