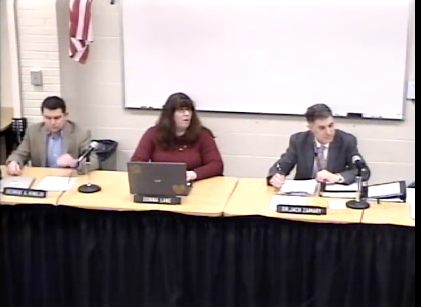 Board of Education Vice Chairman George A. King III, left, with, from right, Chairwoman Donna Lane and Superintendent of Schools Dr. Jack Zamary moments before a board vote to suspend Zamary and interim finance director Frank B. Connolly with pay Monday. Screenshot

Acting Superintendent of Schools Joseph Kobza and central office staff are grappling with the budget deficit for this year, while working on next year’s spending plan, and the Board of Education is working closely with town officials to balance the books on the heels of the suspensions of superintendent Dr. Jack Zamary and interim finance director Frank B. Connolly earlier this week.

“These are difficult times, but this is a great town and we’ve worked through challenging times before,” Kobza said Thursday. “We’re going to work through this one and come out strong on the other end. Everyone is working their tails off to get this done, especially our finance staff.”

Some Board of Education members have expressed frustration over a growing deficit in the 2019-20 budget, which is mostly from special education and medical insurance costs. Board members are trying to get a final number for what the total deficit will be.

At Thursday night’s budget work session, Kobza gave an update to the Board of Education. The deficit continues to grow, with special education rising from $300,000 to $550,000 since the last report.

Kobza said the district had more students who were not budgeted for. Among the increase, there was a total of $70,000 for new programs. When a district receives a special education student it is required to fund each one’s individualized education program.

The district is also not receiving as much financial reimbursement from the state in the form of Excess Cost grants.

Nick Kapoor, a school board member, asked Kobza to provide deficit updates with columns, dates and the difference in amounts, adding there is a story behind each of the changes.

Chairwoman Donna Lane said the board needs a breakdown of which cost overruns are the result of new expenditures and which are from true budget corrections.

As officials work to resolve issues with the current budget, the Board of Education is in the midst of reviewing Zamary’s $60.5 million budget request for fiscal year 2020-21, which includes a 5.7 percent increase in spending.

First Selectman Ken Kellogg and Board of Finance Chairman Michael Manjos have expressed concerns that voters would not approve that big of an increase at referendum.

At Monday night’s board meeting, Zamary and Connolly were suspended indefinitely with pay, following an executive session.

The board then approved the hiring of Attorney David A. Ryan, Jr. of Ryan & Ryan LLC “to investigate employee related issues related to the budget as well as general performance related issues.”

Lane wrote a letter to parents the following day.

“As with any investigation, it would be inappropriate for any board member to comment on the investigation until it is completed,” she wrote. “While this may cause frustration for some of you, it is the most effective way to conduct an investigation.”

The first selectman would not comment on personnel matters of the Board of Education, but he did discuss the looming deficit on Thursday.

Kellogg said he has been meeting with Lane and Manjos to ensure there is a plan to close out the current fiscal year in the black.

The account, which was not set up because of recent cost overruns in special education, though it is not specifically designated for education, has just over $1 million in it, according to Kellogg.

One thought on “Monroe school district in turmoil. ‘We’re going to work through this’”