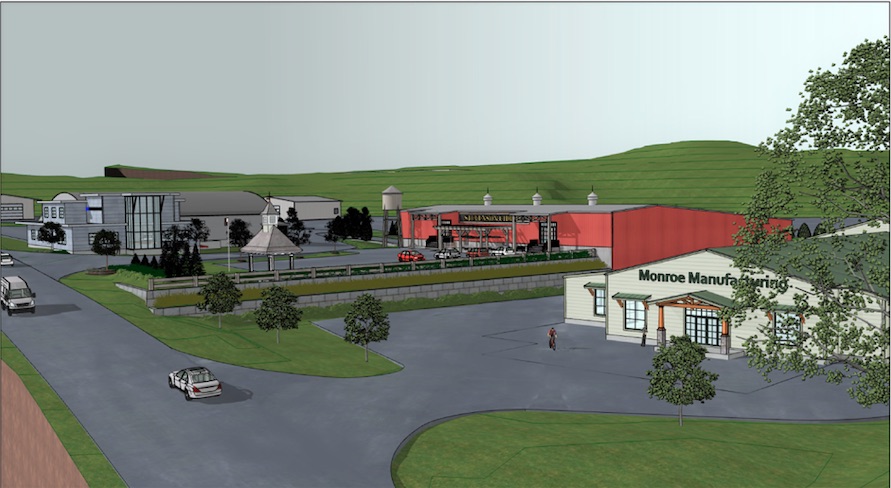 Chris LaVigna, an architect with LaVigna Associates in Ridgefield, created a rendering of how the former Stevenson Lumber site could be developed.

MONROE, CT — A new zone may breathe life into the former Stevenson Lumber property on Monroe Turnpike, a 40-acre-site with dormant buildings. The goal of the Stevenson Business District 2 zone is to spur development by allowing a wide variety uses, though commercial parking will not be one of them.

After deliberating on two applications for the changes Thursday, the Planning and Zoning Commission directed staff to draft an approval without commercial parking as a use. The written approval will be voted on at the next meeting.

“We are excited to continue our work to revitalize the former Stevenson Lumber property into a vibrant use gateway for the town of Monroe,” John Kimball, an acting consultant for the applicant, said Friday.

However, because the applications are still pending, he declined further comment. The applicant, Kimball Family Investments LLC, is owned by Kimball’s wife Jill, son John Jr. (Jack) and daughter Elizabeth.

The property at 1585 Monroe Turnpike and 421 Old Zoar Road was most recently used by Truss Tech, a manufacturing facility for pre-engineered roof and floor wood trusses. Of the roughly 40 acres, approximately 30 was developed with paved areas and now abandoned buildings.

The proposal includes a landscaping plan with a tree-lined driveway.

Aside from a commercial parking facility, a proposed text amendment would allow an indoor cultivation facility; manufacturing, processing and assembly of products; business service facilities; bakery/wholesale; a commercial warehouse contained within a building; self-storage warehousing or rental within a building; and wholesale and distribution centers — not including automobiles or boats.

Leon Ambrosey, a commissioner, asked if indoor cultivation would allow someone to grow marijuana.

Town Planner Rick Schultz said marijuana is specifically prohibited in the town’s zoning regulations, as long as federal statutes are in existence. He said the indoor cultivation would allow people to grow herbs, fruits and vegetables.

If the text amendment and zone change applications are approved, Schultz said any individual use would require a site plan application, so commissioners would still have input.

‘Not the best use’ 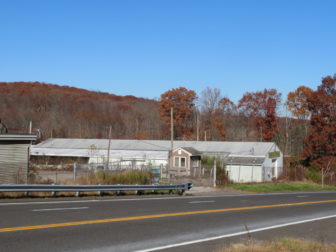 The Stevenson Lumber property has been vacant for years.

During a deliberation session Thursday, Chairman Michael O’Reilly said Kimball Family Investments LLC’s plan “looks like a winning proposal” to him. But Vice Chairman Bruno Maini did not agree.

“I’m not in favor of this at all,” Maini said. “I don’t think this is the best use of this property whatsoever. The commercial parking scares me. The fact they’re not redoing the parking lot scares me. Being close to a watershed scares me. There are of lot of things in this I don’t like and I’m not in favor.”

Maini said he believes there are better uses for the property. Later on in the meeting, he said he could be sold on anything but the commercial parking.

Commission Secretary Ryan Condon noted how Kimball approached the commission with a plan for a robust zone nearly two years ago, before the commission had him work with a subcommittee to narrow down the proposed uses.

“It’s not being rushed. It’s been two years at least where we’ve been discussing this,” Condon said. “I’m definitely not for saying no on this and shutting this down. I think a lot of work has gone into it.”

Condon said he was open to discussing certain aspects of the application, before voting on an approval with modifications.

He mentioned how people are always complaining about the abandoned property with dilapidated buildings on Monroe Turnpike. Condon said he believes the text amendment has a good framework and is something that could help to revitalize the property.

“I have an issue with the commercial parking part of it,” Ambrosey said.

If someone were to use the entire parcel, Ambrosey said the commercial parking could go in one section, but if it is subdivided as planned, he said the use would go throughout the entire property.

Ambrosey recalled how Trout Unlimited had an issue with a commercial parking lot, because of the close proximity to the Halfway River.

During the hearing, Kimball had said it would be 475 feet from the river and one would have to go uphill over 20 feet to get to the river.

A commercial parking facility was initially proposed as a way to raise money, while bringing in tenants for refurbished buildings, but Condon noted how Kimball has since said he received interest from potential tenants. Condon said the commission could strike the commercial parking and hopefully still have development on the site.

Robert Westlund, a commissioner, said the proposed screening is limited due to the topography of the land, so he is concerned that a commercial parking lot would be highly visible to drivers going up or down the hill on Monroe Turnpike, especially during the winter with no leaves on the trees.

Westlund said he is all for revitalizing the property, but commercial parking brings up concerns, from a reduction in the amount of impervious areas to drainage.

O’Reilly said he “wasn’t crazy about” the commercial parking use either, but it was one of the leading uses before any other interest was expressed.