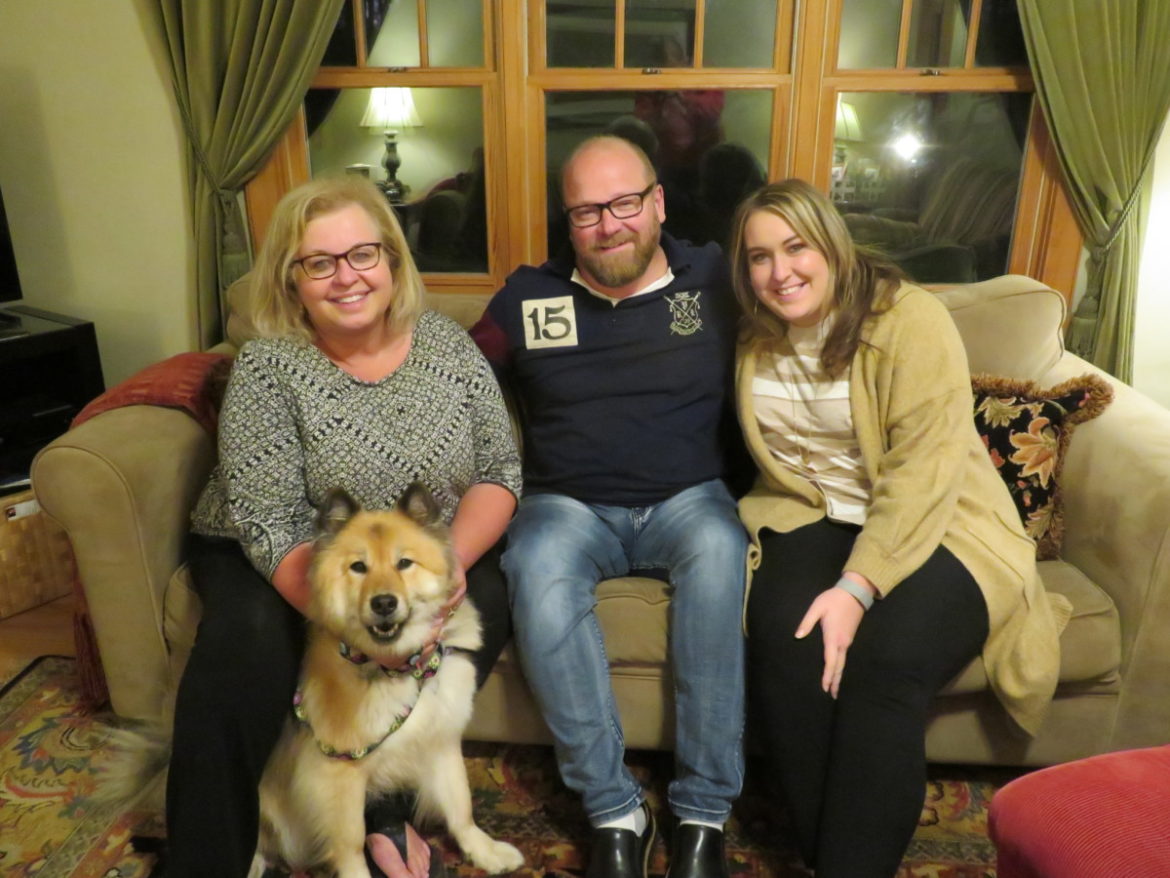 Liz Merritt, left, holds onto her dog Molly in the living room of her Monroe home. Seated with Merritt, from left, is his her husband, The Rev. Kevin Merritt, pastor of Stepney Baptist Church, and their daughter, Emily.

MONROE, CT — A reverend’s dog ran off after being struck by a car on Monroe Turnpike in September, starting a 45-day adventure, which included an encounter with a corgi named Noah and a water crossing before her miraculous return home.

The Rev. Kevin Merritt, pastor of Stepney Baptist Church in Monroe, recounted the story Saturday evening, while seated on a couch in his living room with his wife, Liz, and their daughter, Emily. Their dog, Molly, a four-and-a-half-year-old Eurasier, sat on the carpet in front of her family.

Liz said Molly is a princess, an indoor dog who doesn’t like water, being in the dark or the woods. Molly’s only outdoor activity was walking in her yard on a leash at the Merritts’ house on Monroe Turnpike. But her world changed on Sept. 17.

“We had family home for dinner, a door was ajar and she found it,” Liz recalled of that fateful day.

“She was hit by a car,” Merritt said. “After she was hit, she ran off quickly, up Colonial Drive and into the woods.”

The Merritts also reached out for help on social media and Liz said they posted approximately 1,200 fliers with Molly’s picture around town. “We wanted her back,” she said.

A return to the wild

Molly was first seen on someone’s Ring security camera on Stonewall Drive as she ran across the yard.

She was later seen on Christianna Drive, then Wheeler Road, near Beaver Circle, where a woman driving to Masuk High School stopped her vehicle upon seeing the dog in the middle of the road. She followed Molly into the woods and called the Merritts.

“She saw us from the woods,” Liz said of Molly. “We called her name and tried to offer her favorite food for three hours, but she wouldn’t come out. Of course, we heard a pack of coyotes in the same woods — and it terrifies you.”

She said their veterinarian told them a switch goes off when a dog is hit by a car and the animal goes into survival mode, running away from people. “It’s not your dog anymore,” Liz said. “The dog you know is not in operation right now.”

“It’s almost like a wild animal,” Merritt added.”Calling her name wouldn’t work. We experienced that.”

When they posted information on Facebook, he said they intentionally left out Molly’s name, so people wouldn’t call it, startling the dog into running toward a busy street.

Among the reported sightings, Molly was seen at Jones Family Farms in Shelton.

“They let us set up a trap and set up game cameras and feeding stations,” Liz said. “Their own people went out looking for her. The Jones family was amazing. They couldn’t be more helpful.”

Molly also ran to Zenko Family Farm on Bagburn Hill Road in Monroe, where she was seen playing with that family’s corgi named Noah, who had been missing for four days.

The Merritts said the Zenkos were also accommodating in their search for Molly.

Aside from the danger of crossing roads with heavy traffic several times, Liz said her dog was in an area where a game camera recorded a mountain lion and its cub.

Merritt said the search for Molly could be frustrating with several sightings followed by days of hearing nothing at all.

Among the last sightings was on Friday, Oct. 30, when Molly was seen standing and barking in a woman’s front yard on Stonehedge Lane.

Carol Ferrucci, of CT Dog Gone Recovery, told the Merritts their dog’s survival mode could be wearing off. “She thought she was desperate and wanted to come home,’ Liz said. 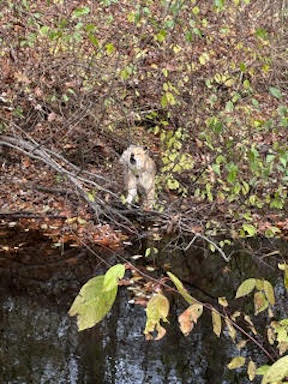 Molly lets out a desperate bark when she sees her owner, Liz Merritt. Liz waded across the water at Whitney Farms Golf Course to get her lost dog.

Merritt was leading a service at Stepney Baptist Church on Sunday, Nov. 1, when Liz’s cellphone rang. She went downstairs and took the call.

It was Patricia Hawley, who told Liz her son-in-law just saw Molly, while he was playing a round of golf at Whitney Farms Golf Course. He was teeing off on the fourth hole, when his group saw what they thought was a coyote in the woods, before realizing it was the missing dog.

“He had to finish the service, but said, ‘Liz, go,'” Liz said of her husband.

Eric, a staff member at the golf club who had taken Liz out on a golf cart to try to find her dog a week before, greeted her Nov. 1 He told her to take a cart and pointed her in the right direction.

When Liz got to the spot, she got out of the cart and walked into the woods. 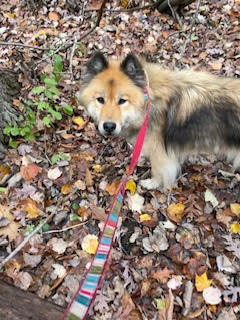 Liz Merritt wrapped a leash around her dog Molly’s head after finding her at Whitney Farms Golf Course.

“I knew I shouldn’t call her name. Maybe I was desperate. I don’t know, but I called her name,” she said. “I heard her cry in the woods. In a couple minutes, she came to the bank, crying and barking.”

A body of water was between Liz and her dog. “She didn’t want to get wet,” Liz said. “She’s a princess.”

A golfer took a stick to measure the depth of the water, which was four to four-and-a-half feet. “I can do it,” Liz thought, before wading into the water.

“She was wearing her church clothes,” Merritt said with a smile.

Molly had lost a lot of weight, dropping from 40 to 31 pounds. The Merritts described her as fur and bones. Liz wrapped the leash around her dog’s head, picked her up and carried her into the water. 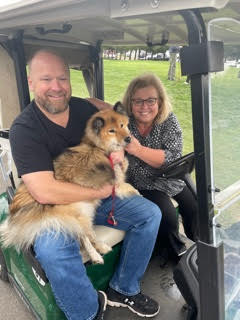 The Rev. Kevin Merritt, left, and his wife, Liz, are all smiles after recovering their dog, Molly.

“I didn’t get very far. I got stuck in the mud,” Liz said. “I noticed a tree, grabbed a branch and pulled us back to where she was. We started walking to find a narrow spot. Eric helped.”

“Kevin showed up,” Liz said of her husband. “He held her, while I drove the golf cart.”

Once back at the clubhouse, Eric brought out roast beef for Molly. “He’s such a sweet guy,” Liz said. 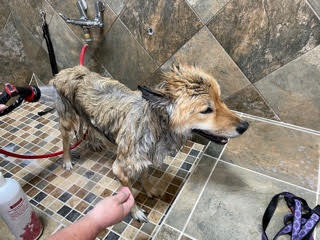 Molly gets a much needed bath.

The Merritts took their dog to Countryside Veterinary Hospital in Shelton, where Dr. Jeffrey W. Santee provided care. Liz said Molly has kidney problems, had a parasite and tick-related condition in her blood, though not Lyme disease.

Molly is now adjusting to being back home.

“She’s been eating everything in sight,” Merritt said.

“We’re seeing more and more of her personality coming out every day,” Liz said.

In the 45 days their dog was missing, she said they had gotten nearly 40 leads from concerned residents in Monroe, Newtown and Shelton.

“People were awesome,” Liz said. “We live in a wonderful town.”

Among those who helped in the search was Liz’s step-sister, Cindy Grabau. “She spent hundreds of hours hiking, looking, studying maps, making maps, bringing her dog out, because it played with Molly before,” Liz said, adding Grabau also provided emotional support.

As a show of his appreciation for the CT Dog Gone Recovery Volunteer Network’s help, Merritt started a matching fundraiser on Facebook with his birthday goal of raising $1,500 for the nonprofit by Monday — he raised $750 so far.

Liz said animal control officers in Monroe, Shelton and Newtown told them what a great group of volunteers the network has, and Merritt said the organization found two other lost dogs in Monroe while searching for Molly.

The Merritts believe it was nothing short of a miracle how Molly was found after such a long period on her own.

“We really held out faith,” Merritt said. “A lot of people were praying. With every sighting, we were just grateful she was alive.”