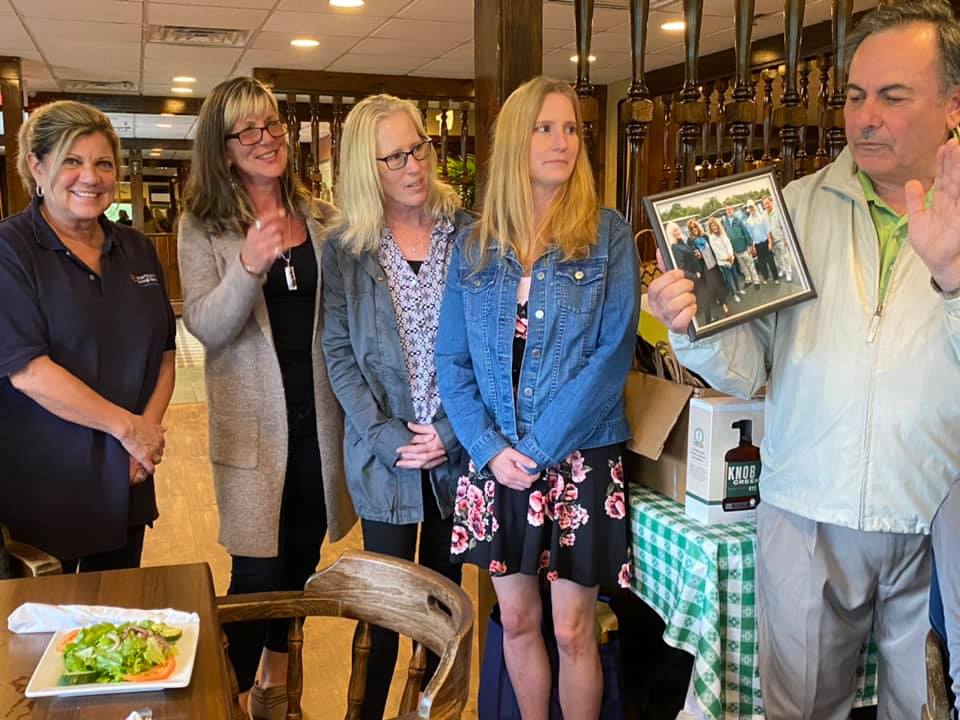 MONROE, CT — Monroe Chamber of Commerce members celebrating a successful golf tournament fundraiser, during their luncheon at Whitney Farms Golf Course Tuesday, look a moment to remember one of their own.

Alicia “Lee” Ryan Faye of Stratford, 72, succumbed to a long battle with leukemia last June. The former senior vice president of Seymour Sheridan was a longtime member of the Chamber.

“I was worried about this morning’s weather, because we had some inclement weather at 6 o’clock,” Monroe Chamber President Ray Giovanni said, while speaking to the dining room crowd. “It was raining like the dickens this morning, but it turned out well. You know why it turned out well? Because Alicia Faye. She was our board member, who was very loyal to our group for many years.” 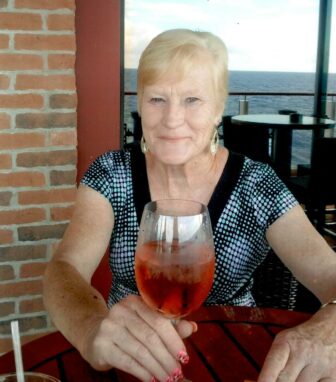 Faye’s daughters, Lisa Dunn, Shari Cole and Kelly Brander attended the luncheon with Faye’s granddaughter and great, great granddaughter. Giovanni called the sisters to the front of the room, so he could present a framed photo of their mother from a previous golf tournament.

“I found an old picture in my files of Alicia,” Giovanni said. “She succumbed to illnesses from cancer and she fought it for decades. She was so positive in her approach to life. We’re so proud of what Alicia contributed.”

Giovanni recalled how, every year, Faye contributed a “wacky bottle she found halfway around the country” to contribute to the raffle prizes. This year Faye’s family brought a box set of Knob Creek bourbon in their mother’s honor.

Giovanni thanked the family for their contribution. “I wanted to acknowledge your wonderful mom’s spirit and how loyal she was to this organization and to our cause,” he said. “I know she raised good children. While you’re here with your children, we’re going to keep this going from generation to generation.”

“Alicia was a personal friend of mine and I miss her very much, and I can’t thank her enough for all of the support she’s always given us,” Snyder said, adding how Faye was “always laughing and happy” with “a friendly smile.”

Beth Stoller, a Chamber member, recalled how Faye insisted on coming to last year’s golf tournament when her family wanted her to stay home to rest, while battling her illness.

There were bursts of applause and toasts for Faye and, bringing tears to her daughters’ eyes as they hugged Snyder and Giovanni. 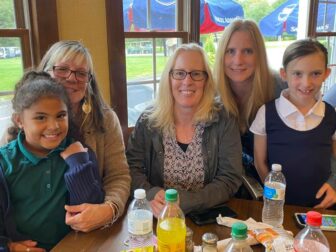 Alicia Ryan Faye’s daughters attended a Monroe Chamber of Commerce luncheon in place of their late mother Tuesday. Pictured is Lisa Dunn, second from left, with her sisters Shari Cole and Kelly Brander, along with one of Faye’s grandchildren and great, great grandchildren. Photo by Beth Stoller

“Thank you guys for honoring our mother,” Brander said. “It’s comforting to know how much she meant to so many people. She loved everybody she met and she had that crazy sense of humor. She’s truly missed … thank you so much.”

“My mom was larger than life,” Brander said, while her family sat at their table moments later.

“It was beautiful,” Dunn said.

“It was nice to have my mom’s hard work and giving spirit honored,” Brander said.