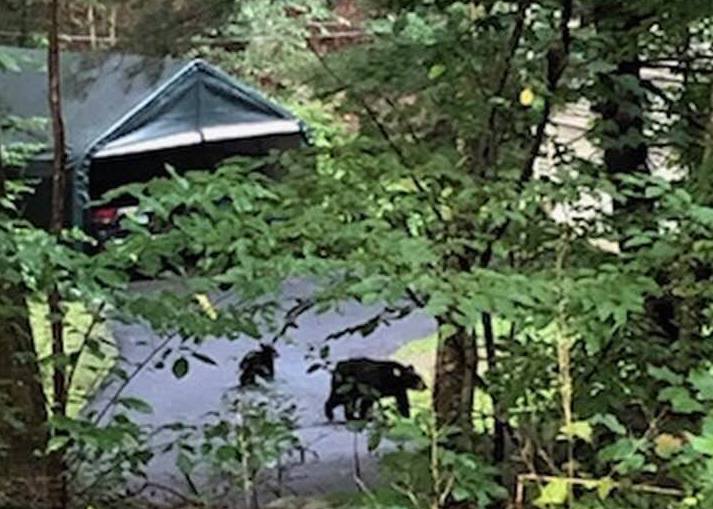 Animal Control Officer Ed Risko says a bear sow and her two cubs are getting too comfortable around people. Here they are in a yard in the 200-block of Hammertown Road. Contributed

A bear sow and her cubs are getting bolder in their search for food, entering garages, porches and houses. Animal Control Officer Ed Risko, whose been monitoring the animals, warns the sow will get a kill order if this continues, because she’s showing her cubs this behavior is okay.

On Friday, he asked visitors to his Facebook page to help make sure that doesn’t happen.

“Nationwide, if a bear becomes a nuisance or is deemed a threat, it is either trapped, tranquilized and moved or it’s killed,” Risko later told The Sun. “So to keep it from becoming a nuisance, you stop feeding them and do not make it comfortable to stay.”

He said yelling and screaming at the bear will keep it moving and afraid. “Do not allow it to be comfortable around humans,” Risko said.

On Aug. 2, a resident on Weekepegme Trail, near the intersection of Scholz Road, reported black bear damage in his yard from overnight. A bear sow, tagged with two cubs, ripped open wooden trash containers and tore a screen window attached to the porch entry door, according to Risko.

Bird feeders were also down and damaged.

Among the other recent sightings, on Thursday, a male motorist reported seeing black bear sow with cubs heading north-east towards Hammertown and Josies Ring roads around 7:18 a.m.

Another man reported seeing the bears on Pinto Lane, near Mustang Drive, around 7:23 p.m.

In all cases, Monroe Animal Control notified the Connecticut Department of Energy and Environmental Protection and species fact sheets with common cautions were provided to the callers.