Frank Bent, president of Monroe Lions Charities, seated to the left, and Dan Keene, chairman of the Monroe Playground Foundation, sign an agreement at Edith Wheeler Memorial Library Saturday for a major donation. The Lions Club will give an $80,000 cash donation to the Wolfe's Den Playground project and match other donations up to $25,000.

MONROE, CT – Monroe Playground Foundation members hope a generous donation from the Monroe Lions Club will inspire others to donate at a time when supply chain issues and a scarcity of materials brought on by the COVID-19 pandemic drove up the cost of The Wolfe’s Den, a project to replace the Kids Kreation Playground at Wolfe Park.

The Lions Club pledged to make an $80,000 cash donation, along with a match for up to $25,000 for all new donations received between now and the community build in May. It is the largest donation to date, accounting for nearly 20 percent of the funding necessary to complete the project, according to a press release issued Saturday.

“We’re very excited to be able to support this project in such a big way,” said Frank Bent, president of Monroe Lions Charities, a 501c3 charitable organization operated by the Lions Club. “The Lions Club has been a driving force behind so many things in Monroe and we’re all about community service. The results of the project will serve the community for decades to come.”

Lions Club Member Len Berger said, “the Lions’ motto is ‘We Serve’ and we’re proud to serve our community through this project.”

Dan Keene, chairman of the Monroe Playground Foundation (MPF), and Vice Chairman Michael Ganino are encouraged by the boost the Lions Club will provide.

“The Monroe Playground Foundation is absolutely thrilled with this donation — especially the matching component,” said Keene. “We’re honored to be partnering with the Lions Club on this project. They have an amazing track record of supporting projects in Monroe.”

“With this donation, we’re 75 percent fundraised and on track to complete our build in May as planned,” Keene added. “Our hope is that the matching grant generously provided by the Lions Club motivates those who haven’t supported our project yet to reconsider and help us make this playground a reality.”

The foundation needs to raise another $130,000 between now and May 1, to embark on the playground build on May 10, as planned. According to MPF, COVID related supply chain issues and a scarcity of materials made the $400,000 playground budget balloon to $540,000 at the time of Friday’s press release.

“As we’re coming down to the wire, we’ve seen so many donors step up even in the last month to push us over the finish line,” Ganino said. “Although $130,000 is a big number, it’s the least scary number we’ve seen through the whole project. We’ve seen the passion people have for this project and we’re confident that businesses and people will help us close the gap in time.”

“The most frustrating thing has been to have hit our original goal of $400,000 and then have the goal post moved on us,” said Ganino. “COVID truly affected everything — even playgrounds.”

The foundation placed orders for materials and is actively recruiting volunteers to help build the playground in May. The new playground is a “community build” project, which means amateur volunteers, under the supervision of a playground architect, will complete the build rather than a hired contractor. 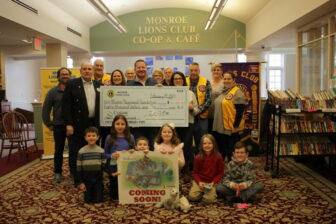 Monroe Playground Foundations members accept a generous donation from the Monroe Lions Club for the project for a new playground at Wolfe Park. Photo by Nina Gagnon

“The build of the original Kids Kreation playground in 1992 was special for Monroe, said Keene. “So many people have told us about the special memories they have of that time. We’re trying to recapture that spirit, preserve that legacy, and build something new the entire town can continue to be proud of.”

“We’re using the same methods and even the same architect as the 1992 group,” he said. “Plus, building this playground as a community gets us a million dollar playground for half the price.”

“One of my favorite parts of this project is that the entire town is going to be able to say ‘I helped build that,’” said Amanda Bean, volunteer coordinator and a member of the foundation’s board of directors. “A playground build of our size needs about 200 people per day and more on the weekends to be successful. You don’t need to know how to build, we have a job for everyone!”

Build Week for the playground is scheduled to run from Tuesday, May 10, through Monday, May 16. For information, visit the foundation’s website at www.monroeplaygroundfoundation.org.