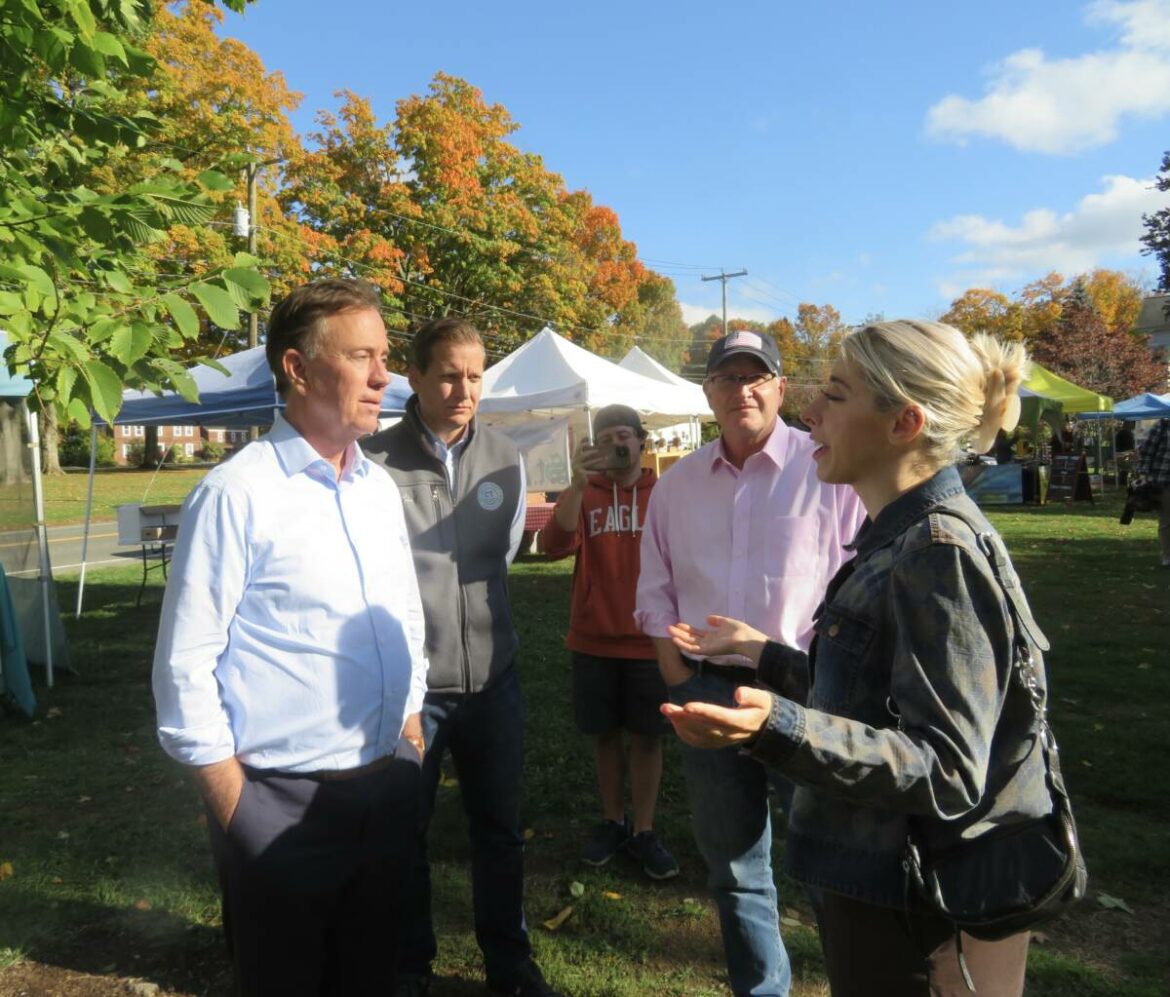 MONROE, CT — Gov. Ned Lamont rang the bell to get the Monroe Farmers’ Market underway Friday afternoon, and was later seen munching on an apple while talking to Herman Olivera about his business, Hannah’s Honey. Lamont also mingled with families and other venders, and marveled at the achievements of Masuk Robotics.

“I think it’s great that he came out, talked to people and asked questions,” Olivera said afterward. “It’s really nice when we have officials come out and mix it up with people.” 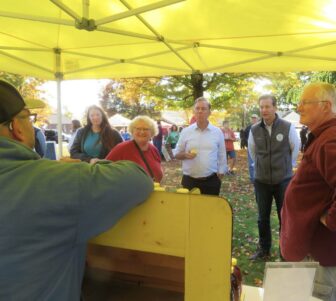 Lamont was accompanied by Bryan Hurlburt, commissioner of the Connecticut Department of Agriculture, and State Sen. Kevin Kelly, R-21st, soon joined them.

“It’s a great farmers’ market,” said Kelly, who has visited Monroe’s market before. “It gives access to a lot of agriculture. Anytime you can give Connecticut agriculture an opportunity, it’s a good thing.”

Lamont noted how Monroe’s market was voted best in Connecticut two years running, and Hurlburt said they wanted to thank the volunteers and talk to the farmers. 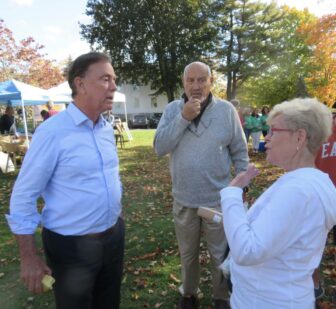 “It’s Friday afternoon,” Hurlburt said. “People have to go out of their way to come here and support it — and that says all you need to know about how important this farmers’ market is.”

Lamont spoke of how thousands of people moved to Connecticut from other states, including to towns like Monroe, and could be overheard telling constituents he plans to greatly increase infrastructure projects. He also listened to the concerns of market goers.

Among them was Chloe Bennett, of Shelton, manager of food waste processing for People 1st, a nonprofit helping men recover from addiction. Its program, based in a warehouse in Bridgeport, includes vertical farming, a grocer and composting. Bennett appealed for funding.

Lamont introduced her to Kelly, who is her state senator, and had a staffer give her his business card. 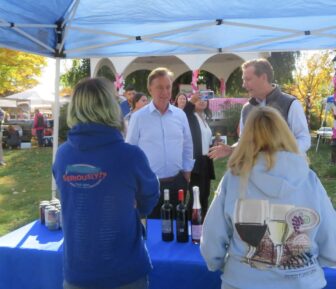 Bob and Laurie Sharp, foreground, from left, employees of Sunset Meadow Vineyards, have the ears of Gov. Ned Lamont and Bryan Hurlburt, the commissioner of the Connecticut Department of Agriculture.

At Sunset Meadow Vineyards’ table, employees of the Goshen business, Laurie Sharp and her son, Bob, talked to the governor about allowing local vineyards to sell their vintages in grocery stores.

George Motel, owner of Sunset Meadow, has been working with Hurlburt to find a way to achieve the goal without hurting liquor stores.

“He was really nice,” Bob Sharp said of Lamont. 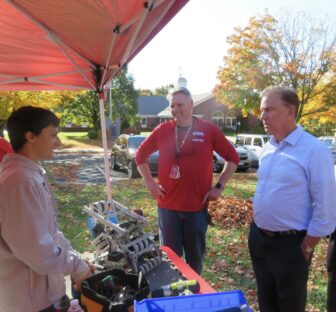 John Iacono, a Masuk sophomore, left, tells the governor about Masuk Robotics as his coach, William McDonough, looks on.

One of Masuk’s teams was the first in Connecticut’s history to make it to the finals, reaching the semifinals of the competition — and the first to win a division in the VEX World Championships.

“What was your secret sauce that got you to the world championships?” Lamont asked.

Before he left, the governor posed for a group photo with the robotics students.

Iacono said he had never met the governor before.

“He seemed really nice,” Iacono said. “He looked like he was interested in robotics and was proud of us for representing Connecticut.” 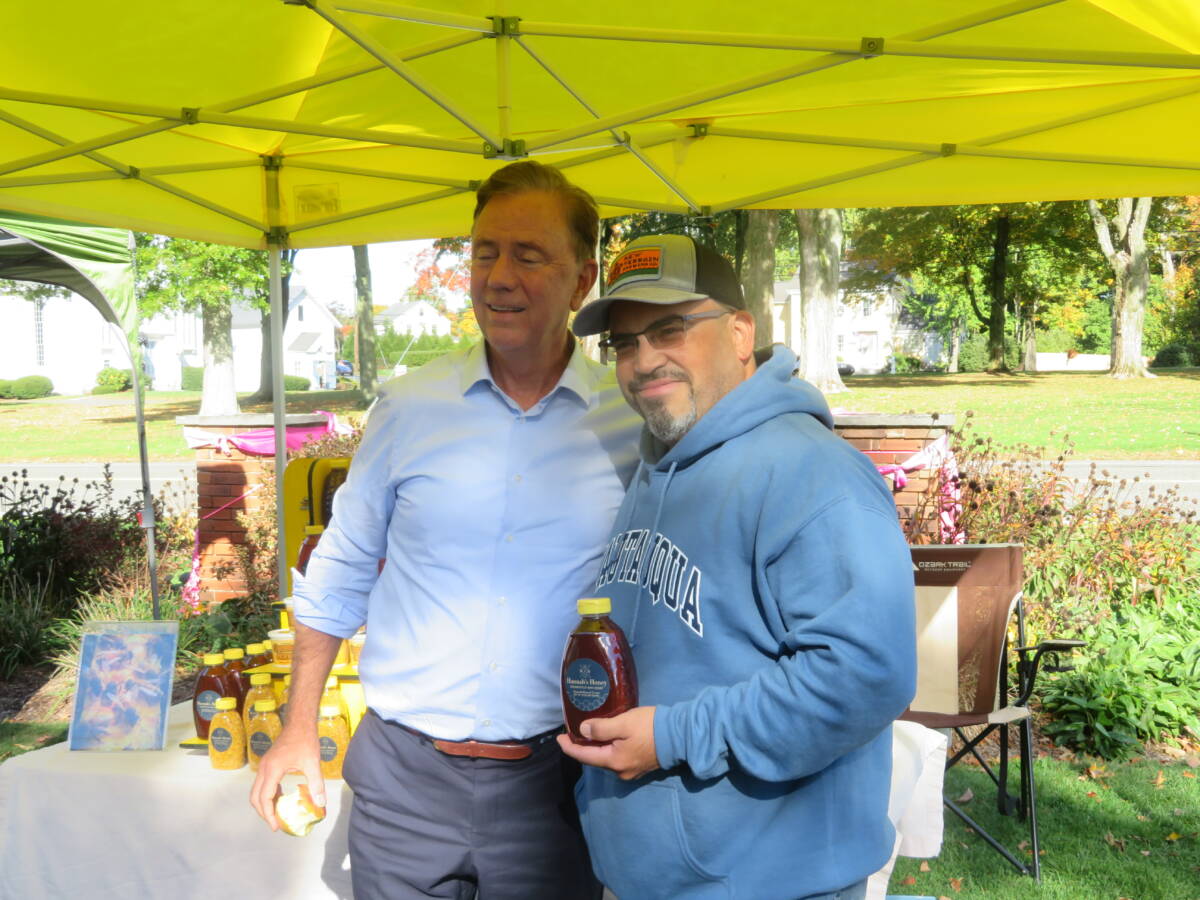 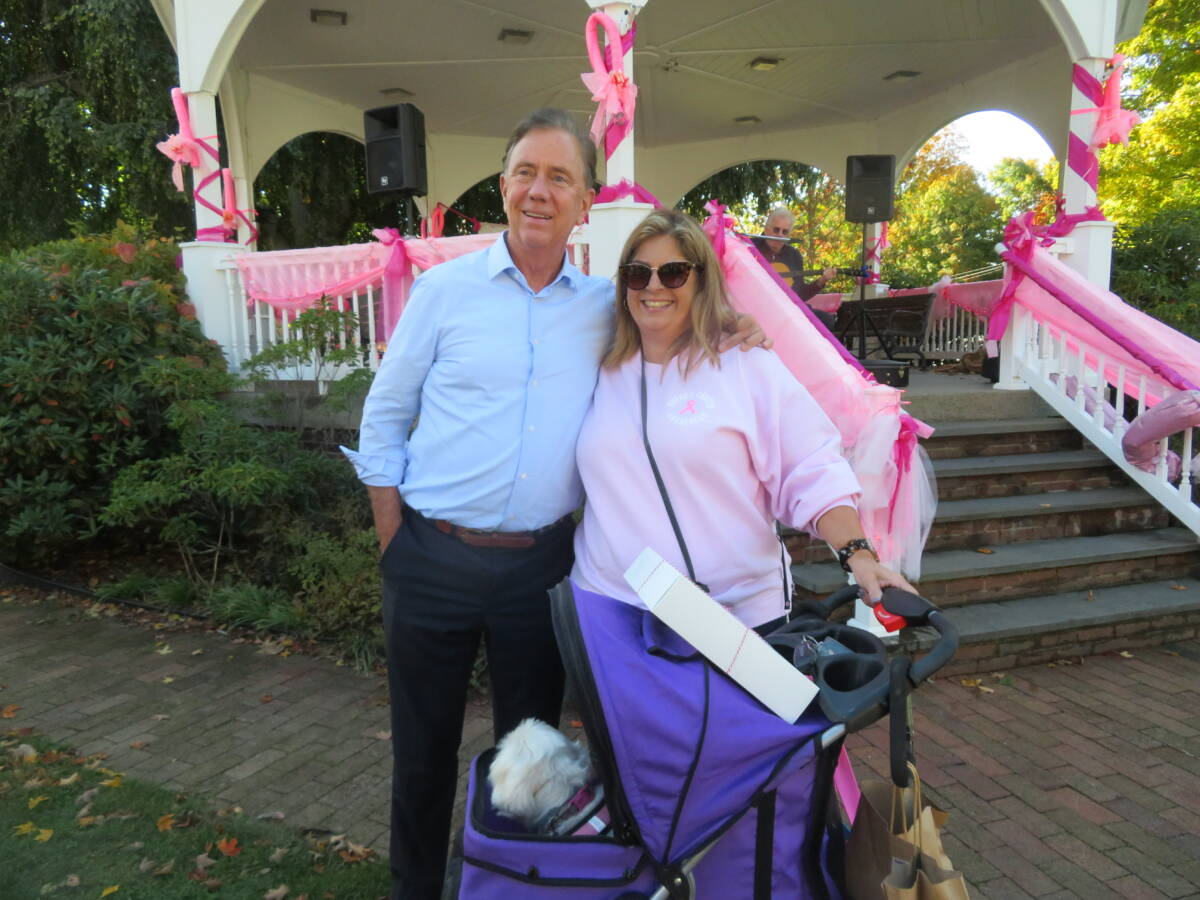 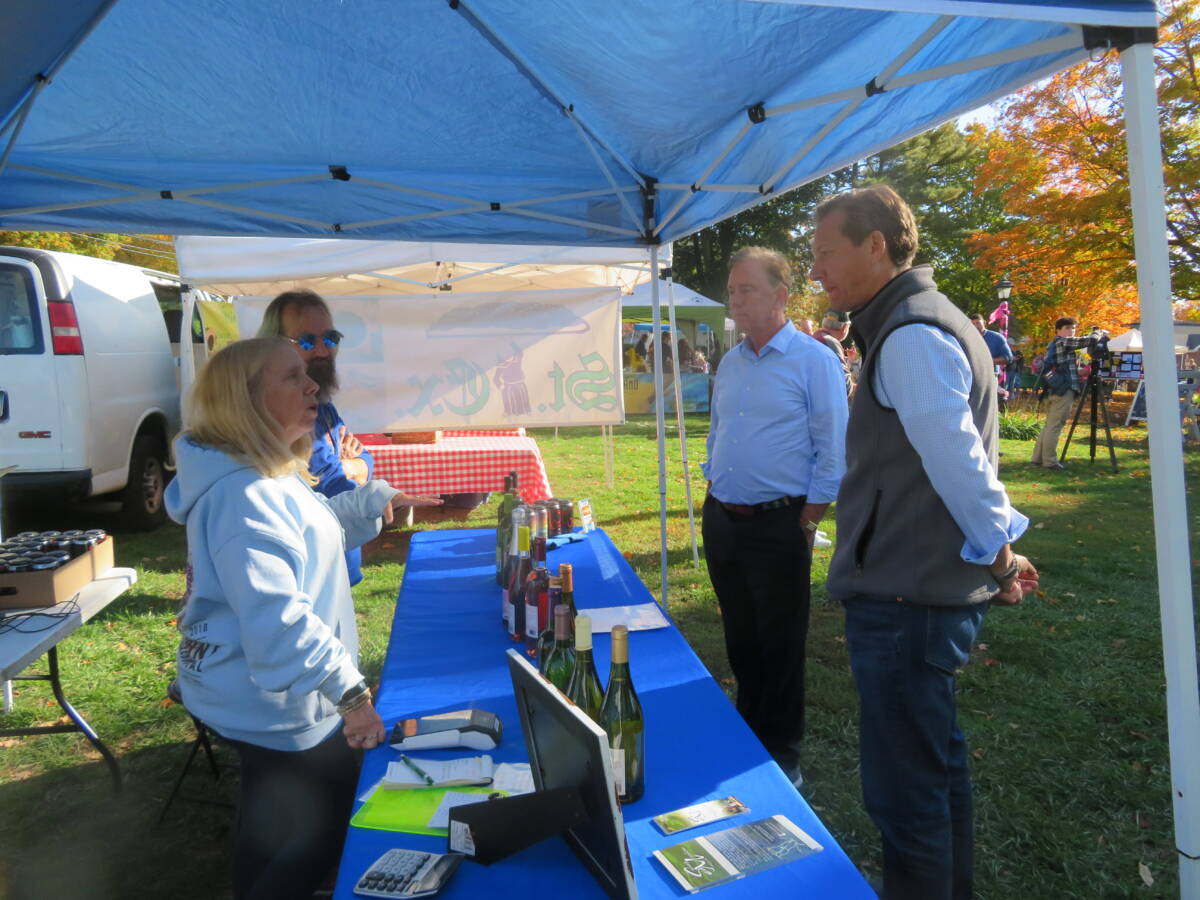 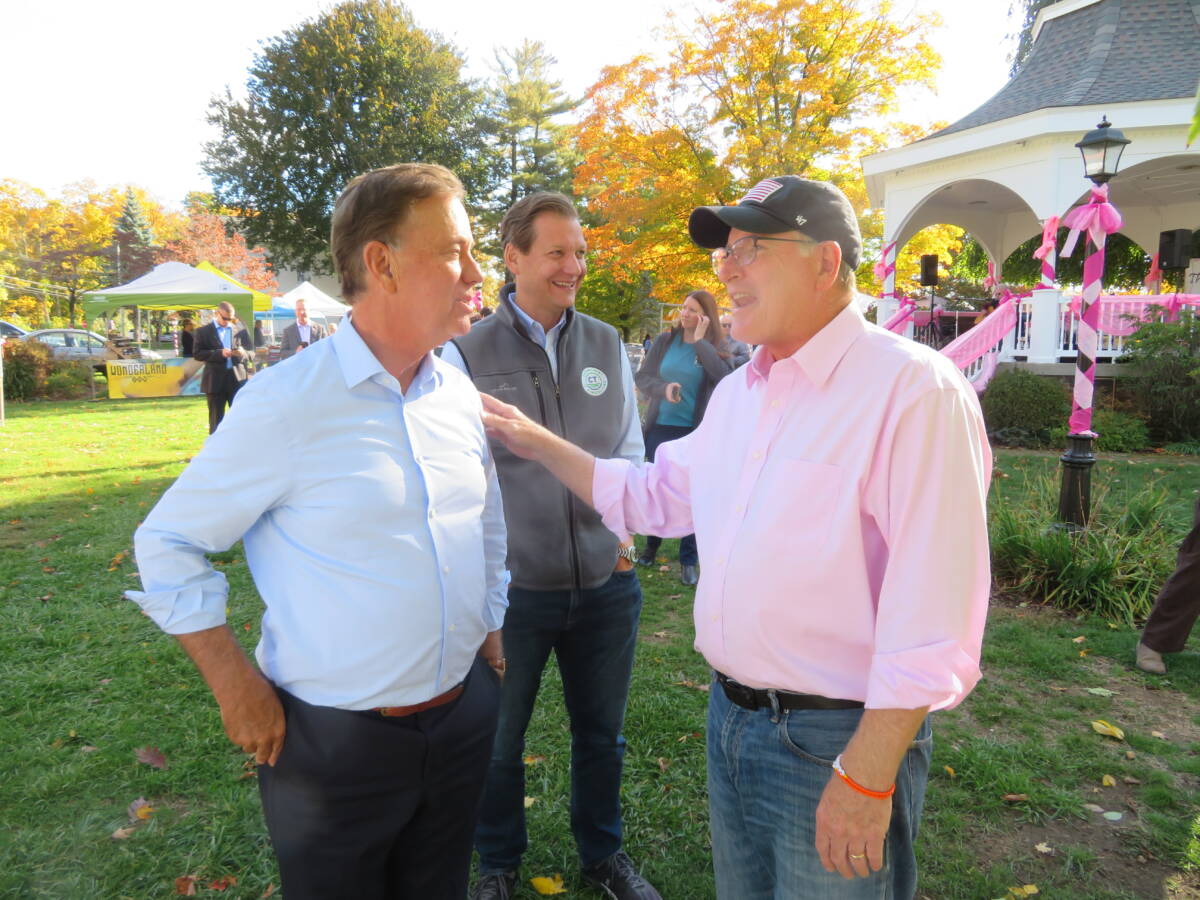 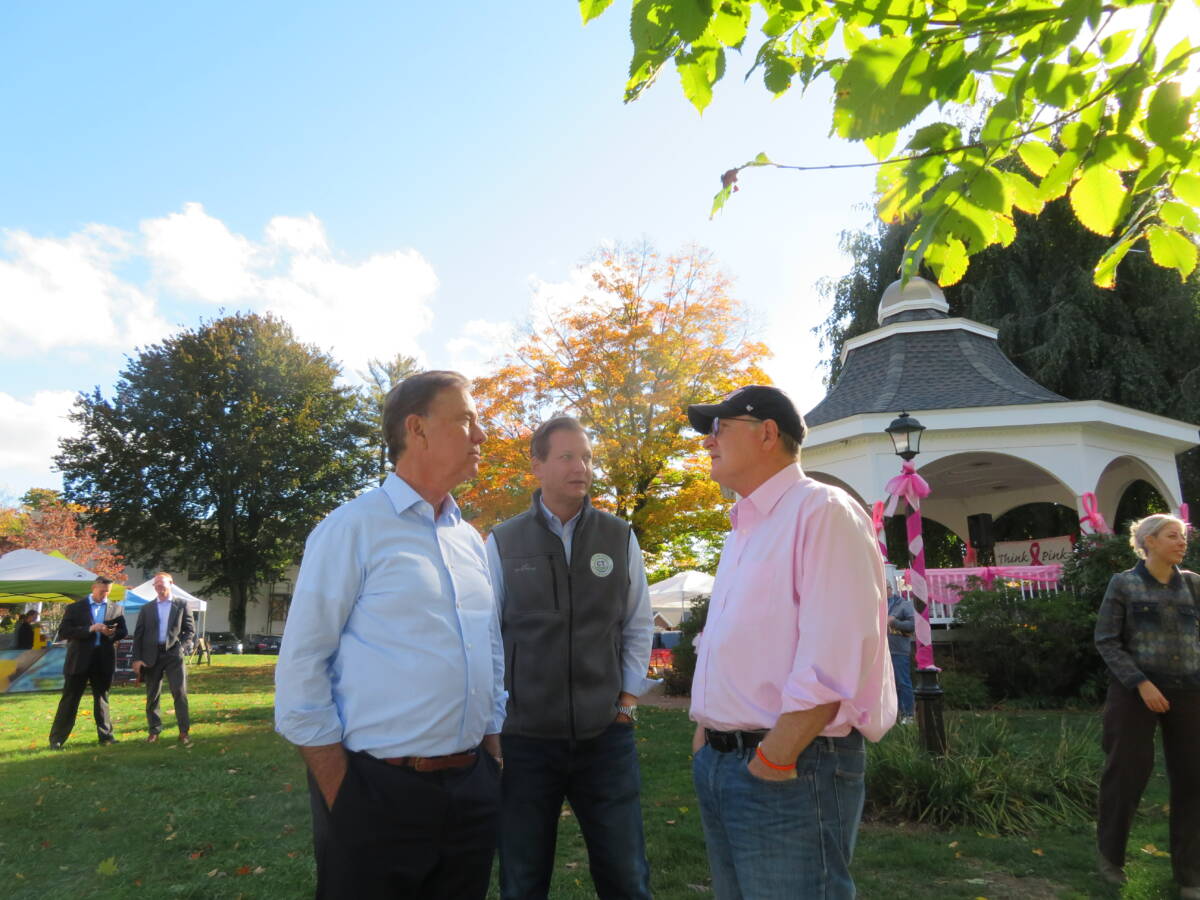 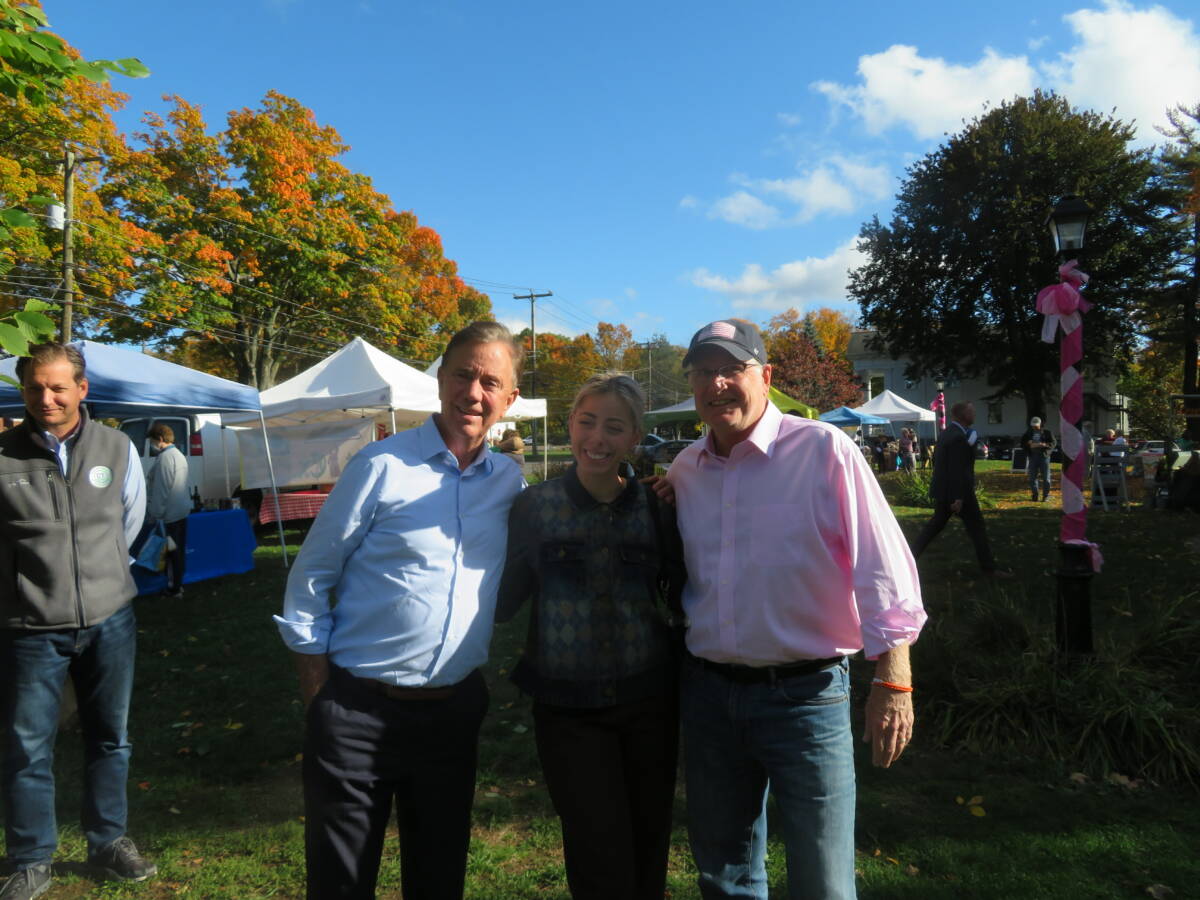 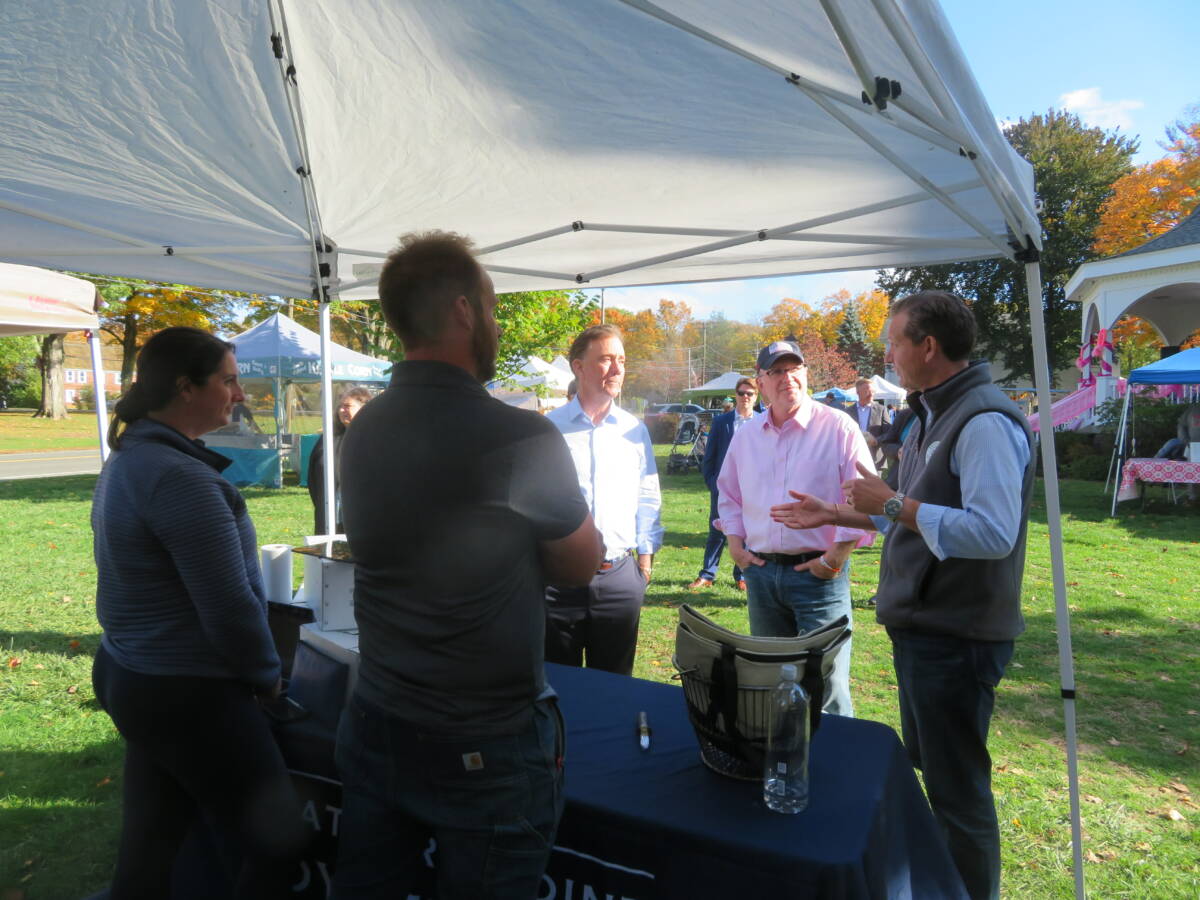 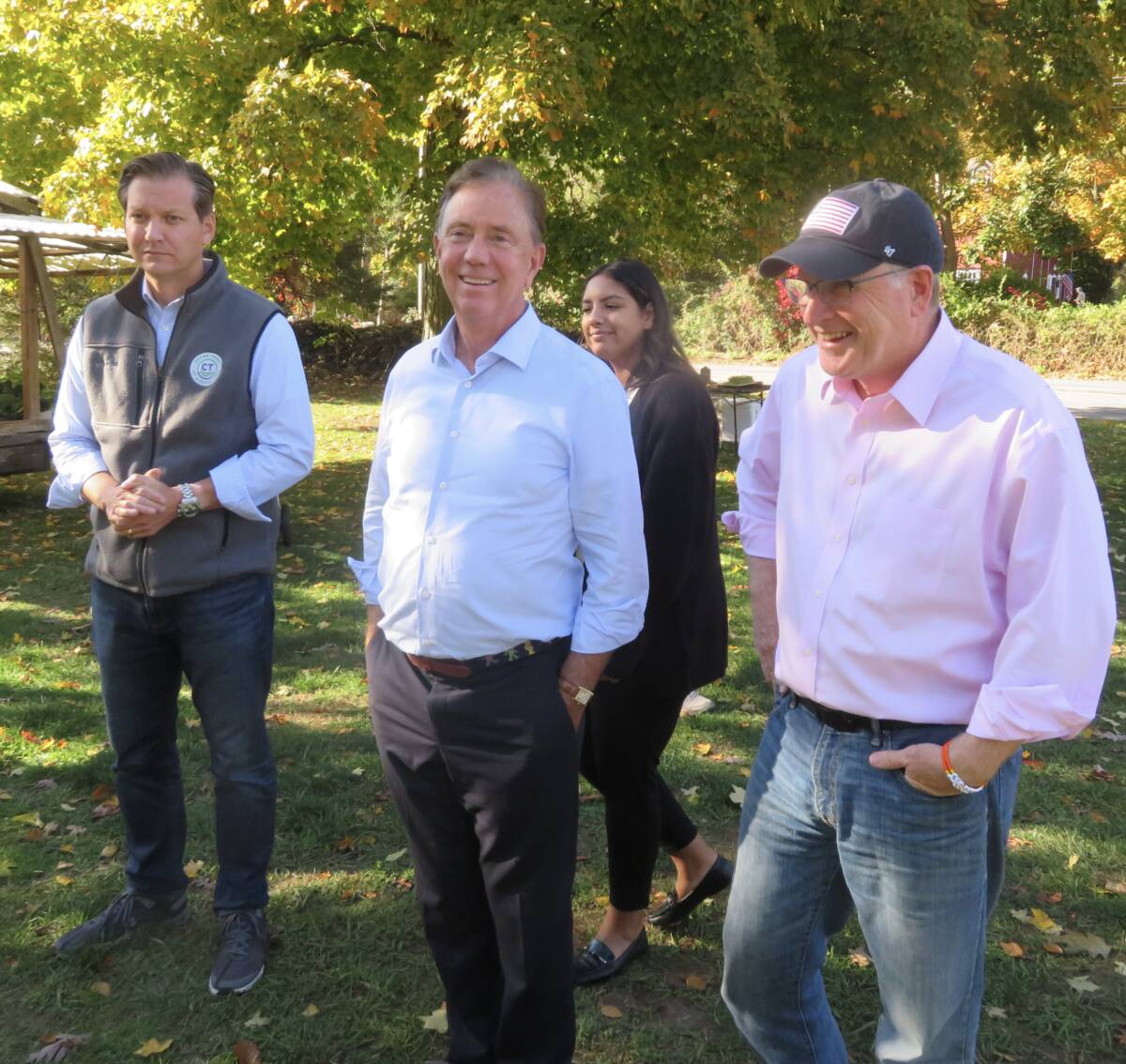 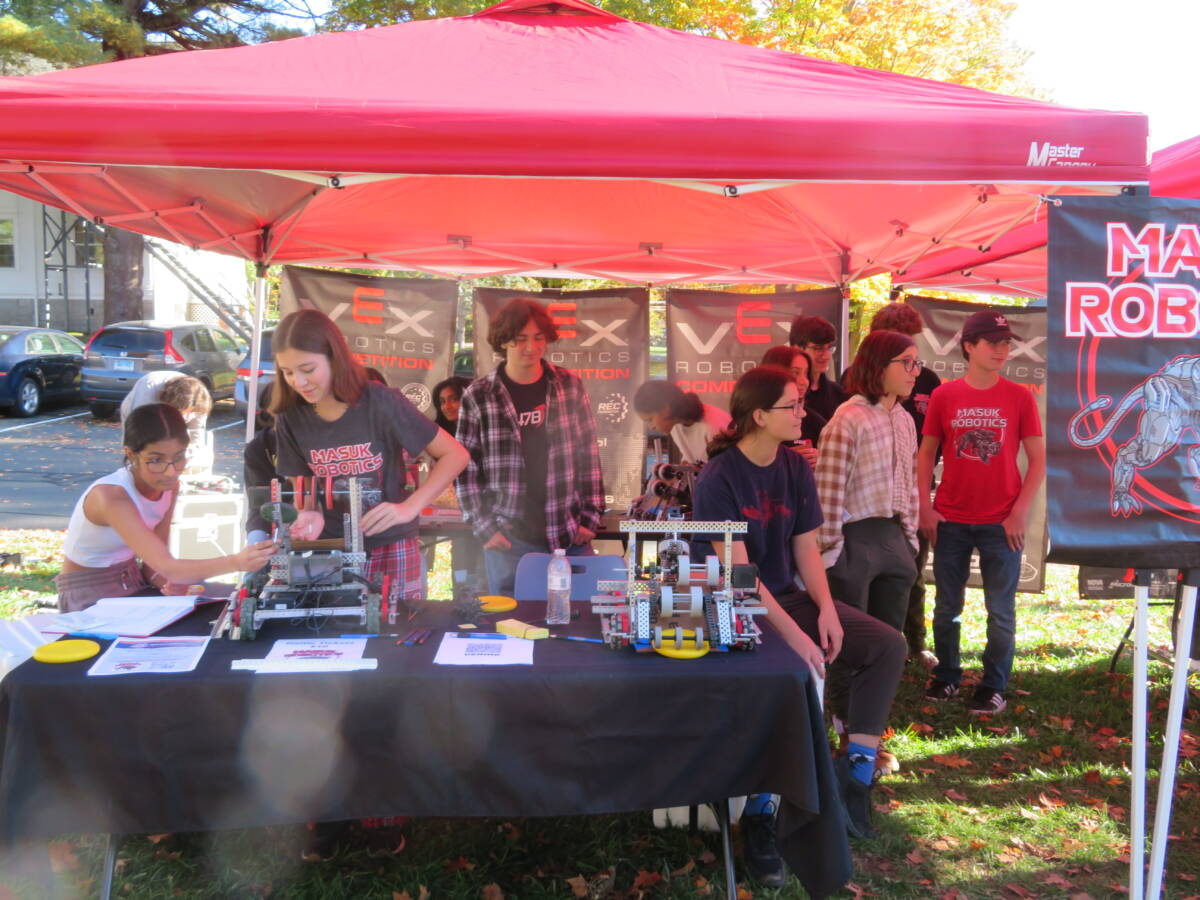 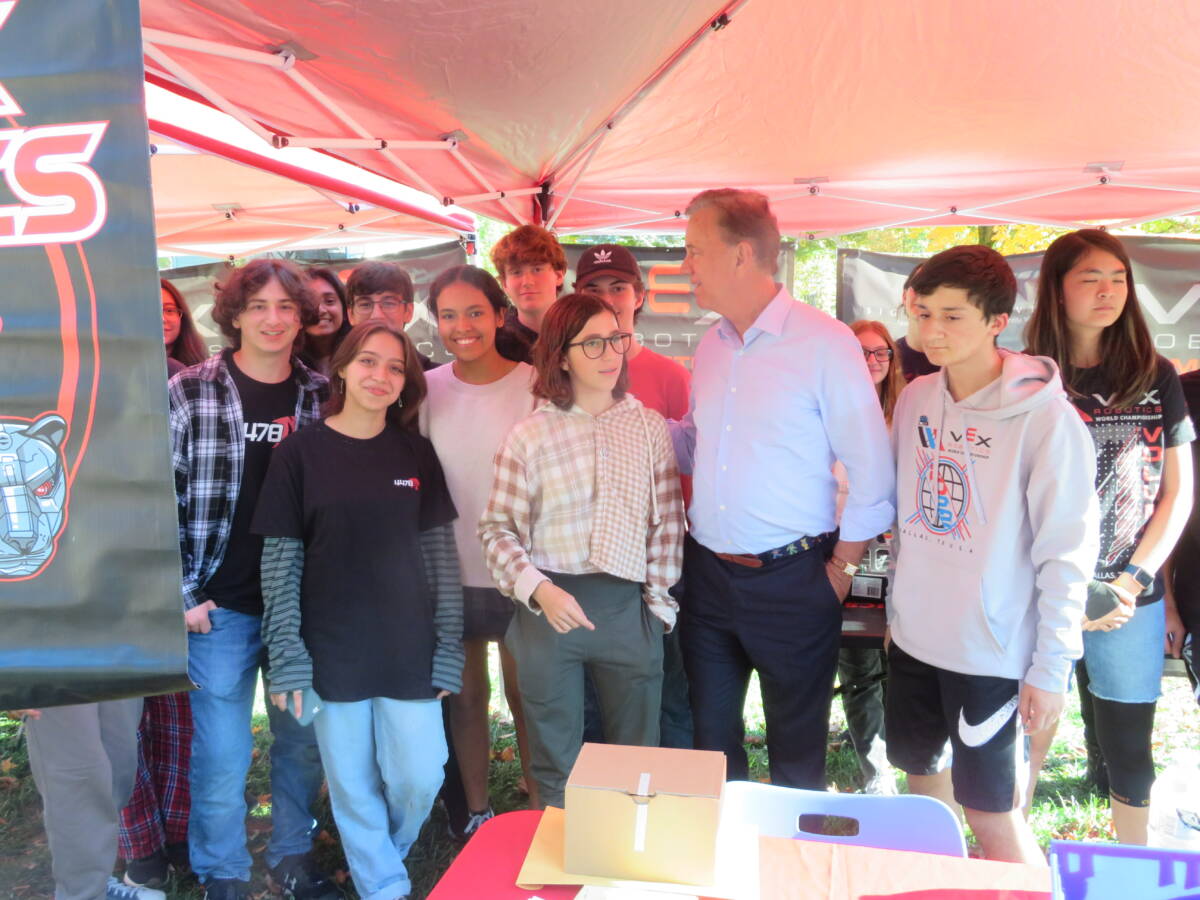 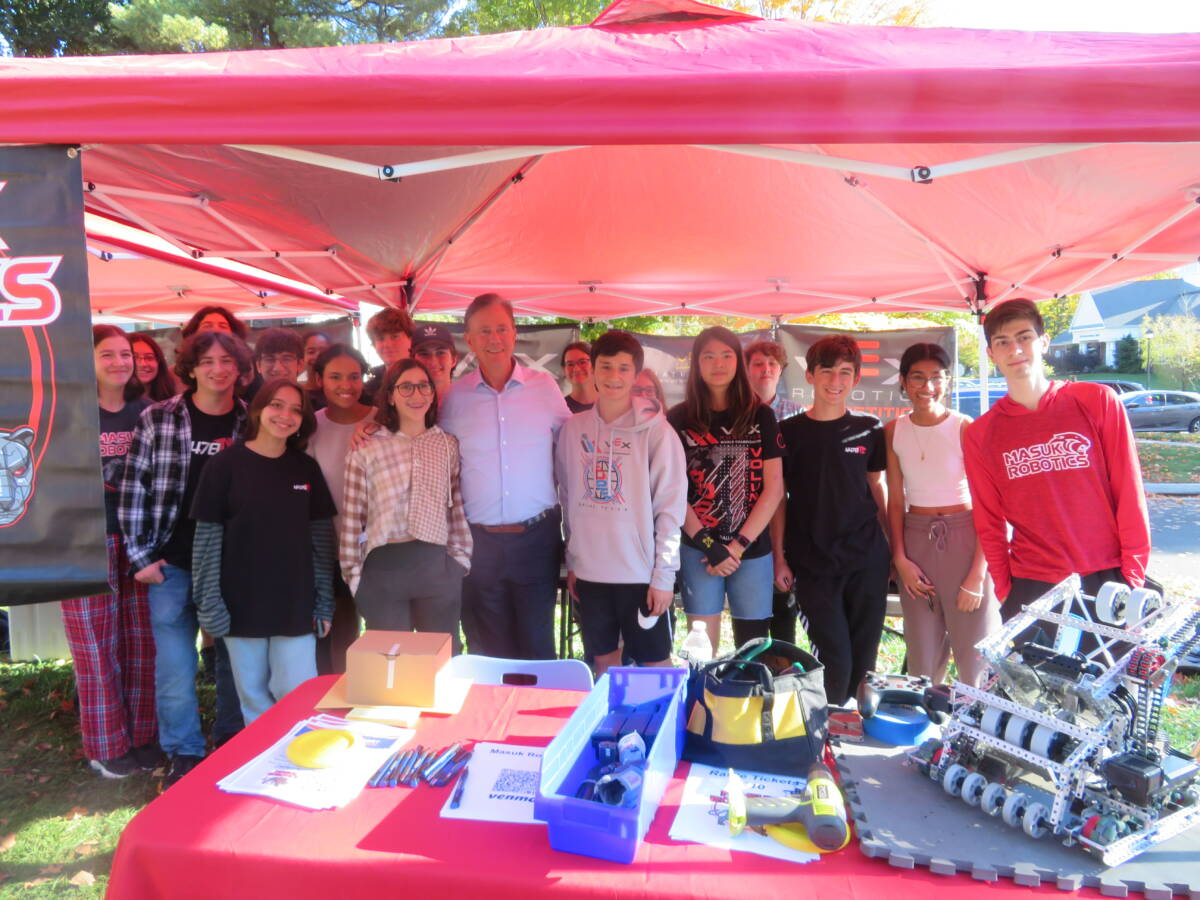