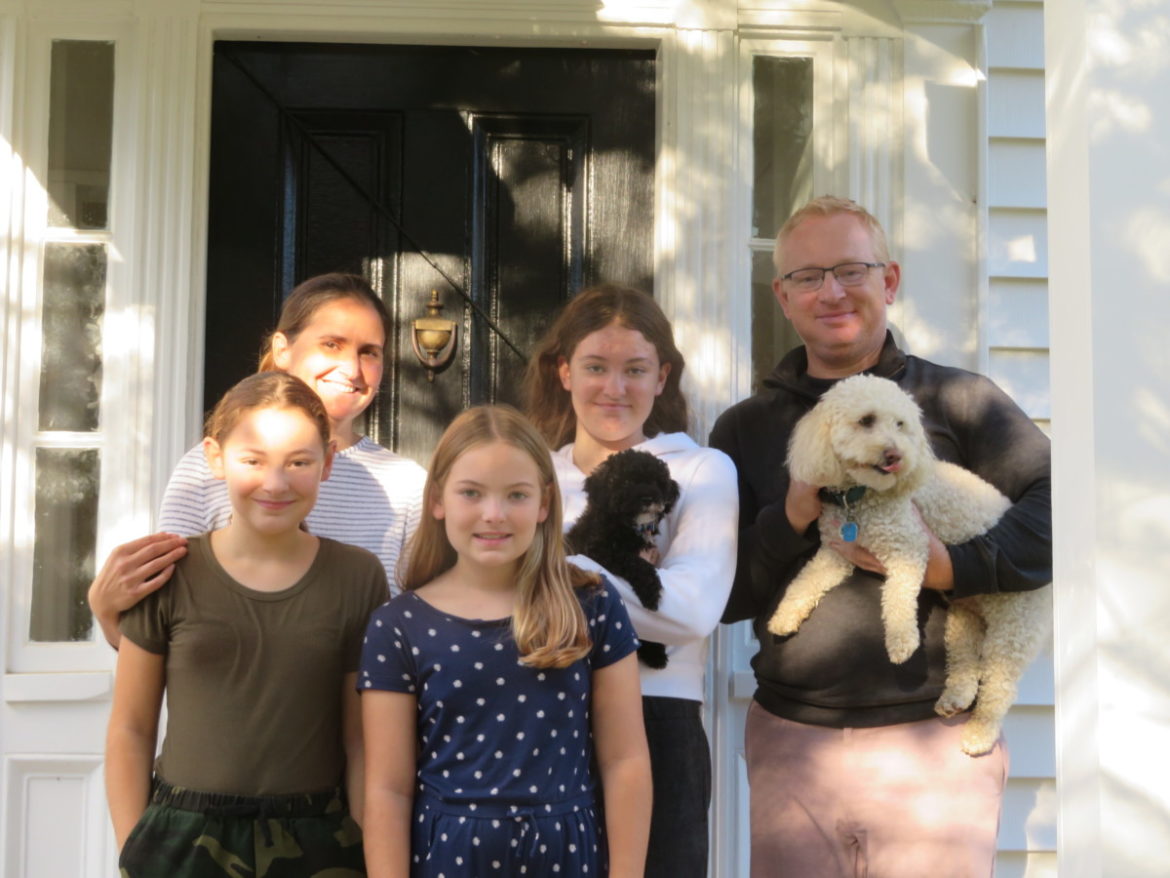 Louise and Alex Darby moved into their new house on Elm Street with their three daughters, from left, Tilly, Aggie and Scarlett, as well as their dogs, Huckleberry and Bear.

MONROE, CT — Alex Darby’s role in asset management for BlackRock, an investment firm, required a move to be closer to the Manhattan office, but the COVID-19 pandemic made it unsafe to fly his family from their home in San Franciso to the East Coast.

He and his wife Louise packed their two cars and made the six-day cross country trek with their three daughters, Scarlett, Tilly and Aggie — and their dogs, Huckleberry, a white Bichon Poodle mix, and Bear, a mini golden doodle.

They could have lived anywhere in Connecticut or New York, but decided to buy a white, six-bedroom colonial-style house on Elm Street in Monroe, Conn.

“My boss lives in the town and he was extolling the virtues of it,” Alex said, “and coming from the Bay area, we liked the housing costs and the space — and Louie and I were impressed with the education standards.”

Their children made a smooth transition into the school system: Scarlett as a sophomore at Masuk High School, Tilly as a seventh grader at Jockey Hollow Middle School and Aggie as a Monroe Elementary School fifth grader.

“Oh we love it,” Louise said of their new home. “Everybody is friendly and welcoming. There is a real sense of community and it is beautiful.”

The Darbys are originally from England. Louise, who had lived in Rugby, a market town in Warwickshire, said Monroe reminds her of the English countryside with its trees and small roads.

The Darbys are among an influx of families have been moving to Connecticut from out-of-state since the spring. Monroe residents have reported seeing more out-of-state license plates on vehicles driving around town, especially from New York.

Dr. Douglas Knapp and his wife, Jacqueline, who practice Chinese medicine with acupuncture and herbs in Brooklyn, moved from the city with their four children and Knapp’s mother-in-law. They closed on a large colonial-style house on Scenic Hill Lane in Monroe on Sept. 23.

When Knapp was interviewed for this story, his family was still living out of boxes.

“We looked all around in the area and houses would be up for a week and they’d disappear,” he said. “The houses in the area were going quickly. We wanted to be close to the city and with four kids and my mother-in-law, we also needed more space.”

The Knapps have two boys, ages 17 and 19, and two girls ages 10 and 15. Knapp said his daughters can now have their own bedrooms.

“We were certainly pushed harder by everything that’s happened in the past year and the decline of the city,” he said. “The whole reaction, letting criminals out of jail because of COVID-19, no cash bail … these policies just made the streets more unsafe.”

Knapp and his wife will still have their practice on New York’s East Side during their transition to life in Fairfield County.

“The foliage is beautiful,” Knapp said. “Driving down the Merritt was just fantastic the last couple days, so far so good.” 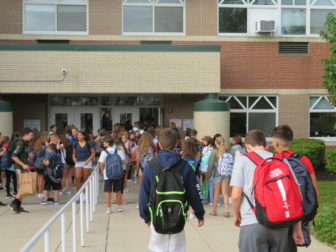 Jockey Hollow students arrive on their first day of school two years ago.

According to enrollment statistics from Monroe public schools, 56 new students moved to Monroe from out-of-the state. Acting Superintendent of Schools Joseph Kobza said this does not include kindergarten students, because that grade is listed as a child’s first school.

Realtors interviewed for this story credit the town’s school system as one of the main reasons families are choosing this suburban town of nearly 20,000 people.

“I’m so glad to hear this feedback,” Kobza said. “As a life-long Monroe resident, I have a tremendous amount of pride in our schools and our community. Monroe offers a lot for families, so I’m not surprised to see many of them choose our town.”

“Monroe is an outstanding community with great schools, safe neighborhoods and beautiful parks,” First Selectman Ken Kellogg said. “We have wonderful businesses — ranging from retail shops that are a part of our small town charm, to larger companies and manufacturing in our industrial park.”

Danielle Rownin, a Realtor with Keller Williams Realty Partners, said a low inventory of houses and rising demand has led to a seller’s market in Monroe. While comparing Jan. 1 through Sept. 30, 2019 with Jan. 1, 2020 through Sept. 30, 2020, she said the average sales price is up 7.2 percent.

“What’s interesting is the number of homes for sale is down 24.2 percent, which means a low inventory,” Rownin said. “Homes are not languishing on the market and they’re selling quickly and for more money. Multiple offers are selling over asking price.”

“It’s a perfect storm,” said Shannon Monaco, a Realtor with Re/Max Right Choice in Trumbull. “Even before COVID, interest rates were really low, so the mortgage lenders were already slammed. Then there was the dynamic of this huge influx of buyers coming our way.”

Pending sales under contract are up 20.2 percent and the number of closed sales are up 9.7 percent, according to Rownin.

“Any buyer now has five plus offers,” she said. “If the house shows well and is priced well, it’s going in days if not minutes.

Rownin said buyers are sending letters to sellers in hopes that, with all things being equal, they can reach them emotionally to win the deal.

Monaco said some buyers learned of the competitive market the hard way.

“It’s definitely hard for the buyers after they lose out on a few homes, because of multiple offers,” Monaco said. “They get bit a few times, losing a house they want to someone else.”

Monaco said she recently listed a house that received multiple offers, before people who already lost out on other homes swooped in and bought it for above asking price. One Realtor of a client who didn’t get it called Monaco asking for advice for the client, who had just lost out on a second house. 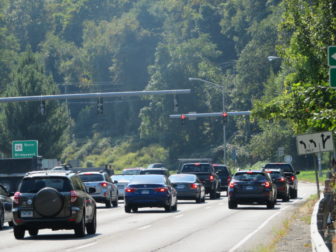 Monroe has easy access to major highways, including Interstate 95, the Merritt Parway and I-84.

Once the initial shock of the pandemic started to settle, Rownin said the real estate market began to heat up by mid-May.

“March and April it was kind of flat to almost nothing, because people were sitting and waiting, not knowing what to expect,” she said. “Once things started to settle, consumer confidence picked up and activity bred more activity.”

Rownin said she believes the majority of those relocating to Connecticut are coming from New York. Among the reasons are to pursue job opportunities and a dramatic increase in the ability to telecommute, reducing the need to live in the city.

“I think the fact that companies are embracing telecommuting is a strong factor — and not so much the virus itself, but the safety of New York City,” Rownin said. “I’m hearing from clients that they don’t feel safe there. The socioeconomic climate there is uneasy, so if they are going to make a move, now is the time to do it and get more for their money.”

For those who still have to commute to the city on some days, Rownin said it’s a straight shot with Metro-North and I-95.

Rownin said the cost of renting in New York City is high, because of the location, adding, “you can own a modest home in Fairfield County for what you pay in rent.”

Aside from moving out of the crowded city, Monaco said some New Yorkers are buying second homes in Connecticut.

“Fairfield County specifically is the logical move for many, which is great for us because we never recovered from the Great Recession in 2009,” Rownin said. “We haven’t seen the growth that other parts of the country have. We’re benefiting from an economic perspective, but we were long overdue.” 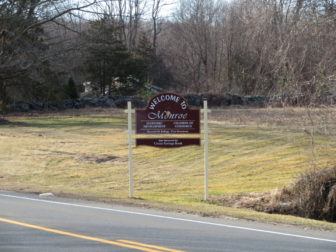 Many families, who could have moved to a number of Fairfield County towns, chose Monroe this year. Monaco and Rownin, who are both Monroe residents, have their own theories of what swayed them.

“Why Monroe?” Rownin asked. “People are attracted to the award winning school district. It’s a tight knit community that is very family focused. It is my opinion that the town and the residents work to keep the community connected.”

Rownin said Wolfe Park is “a treasure” with so many amenities, adding, “and I think we have a dynamite Parks and Recreation Department that offers a myriad of programs all year long.”

She said Monroe also has a bountiful Farmers’ Market from June to October and Edith Wheeler Memorial Library’s director, Loren Rhyins, has ensured that the library offers great online programming throughout the pandemic.

“In my opinion, I don’t know why anyone would want to live anywhere but Monroe,” Rownin said.

“The community is a huge factor I think,” said Monaco, a Monroe native. “There’s a lot of people here, but it still has a small town feel and real sense of kindness and helping each other. It’s really special and unique.”

“We have great parks. We’re in between New York and Boston,” Monaco said. “We have a nice location, but I really think the sense of community is unique. There’s a lot of people here, but it still has a small town feel and a real sense of kindness and helping each other. People who grew up here recognize what it is and want that for their families.”

From hellfire to hurricanes

Alex Darby said moving from the West Coast to Monroe “puts us on the right side of America to get to England,” making the flight six hours shorter. But it took a lot of driving in late July to get here.

“We would have liked to spend two weeks and visited the national parks,” Darby said. “We packed our two cars with camping gear and other stuff the movers wouldn’t take.”

Once they got to their new home, the Darbys did not know how long a wait it would be for their things to arrive, Louise said, explaining the need for the camping gear.

During the drive they slept in Reno, Nev., just outside Salt Lake City; in Nebraska, Iowa, Indiana, Pennsylvania, then one night in New York before driving non-stop to Monroe.

“We bought the house on FaceTime through our real estate agent,” Alex said. “Thankfully, we like it.”

After they settled into their new house, the Darbys’ belongings arrived three days later. Then Tropical Storm Isaias blew in, with its strong winds toppling trees and power lines.

“The next day we had a power outage,” Alex recalled. “We were out five days. We lost power, Internet and had poor cell coverage here.”

Chris McHugh, Alex’s boss, showed the Darbys some Monroe hospitality, lending them a generator that kept their refrigerator running.

“So we traded hellfire and earthquakes for hurricanes — and I heard about the winters,” Alex said with a grin.