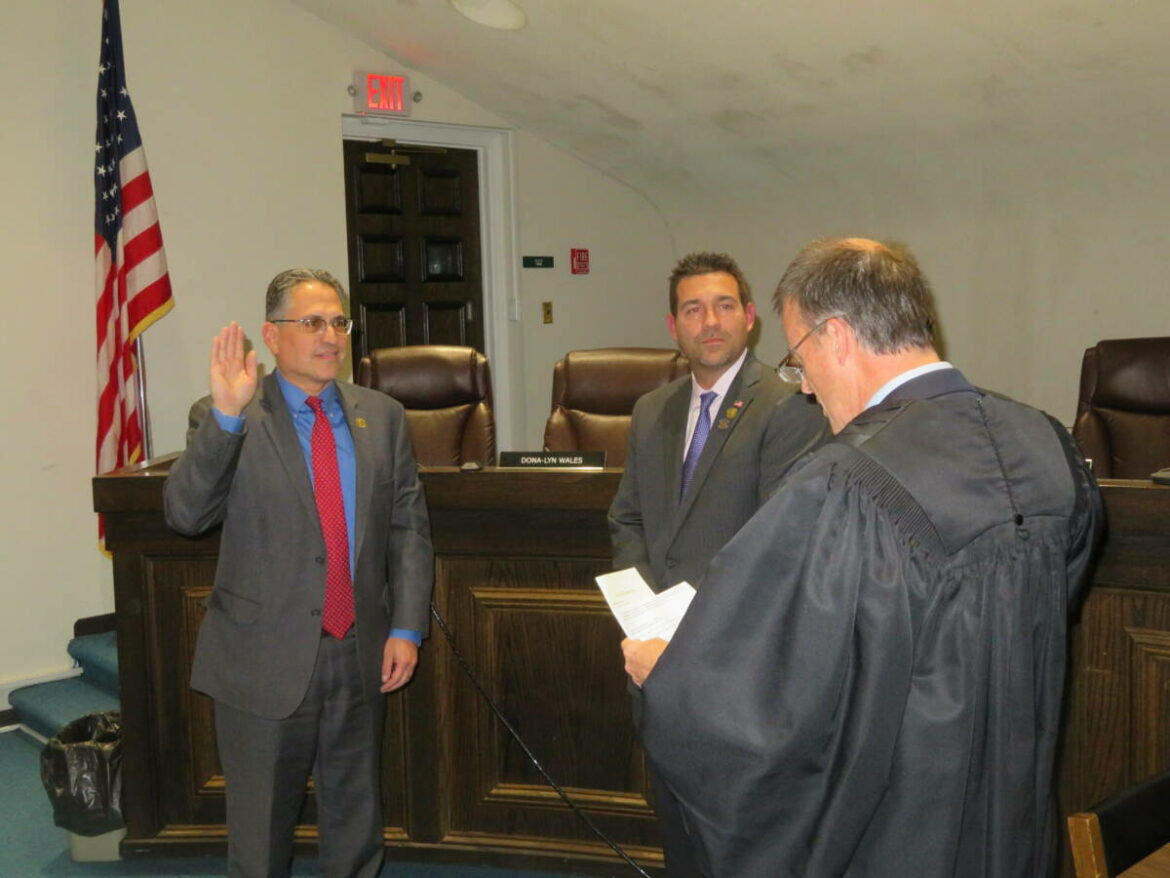 Ken Kellogg is sworn in for another term as Monroe's first selectman by Probate Judge T.R. Rowe on Monday night, as State Rep. Tony Scott, R-112th, looks on.

“Congratulations to all our town officials who have taken office this evening,” Kellogg said during a speech from the podium. “Whether elected or reelected, your service is greatly appreciated and, on behalf of our town, I sincerely thank you.” 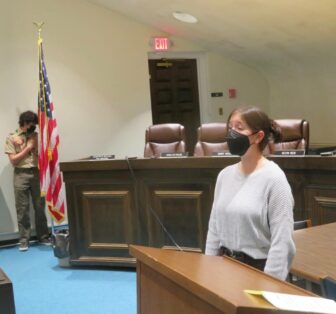 Virginia Grabovsky, a Masuk High School student, sings the “National Anthem” at the start of the Oath of Office Ceremony at Monroe Town Hall Monday.

On Nov. 2, Kellogg, who ran unopposed, and fellow Republicans swept to victories, maintaining all elected town positions and majority seats on every board and commission.

“My heartfelt gratitude goes to the voters of the town of Monroe,” Kellogg said. “While I, like others here tonight, ran unopposed, the number of votes was a clear indication that the people of Monroe continue to have confidence in me and my team — and for that I am extremely grateful. And I will always respect that trust that you have placed in me.”

State Rep. Tony Scott, R-112th, stood by Rowe as winning candidates took their oaths of office and continued the tradition of his predecessor, J.P. Sredzinski, by handing out Town of Monroe lapel pins to those who were elected for the very first time. 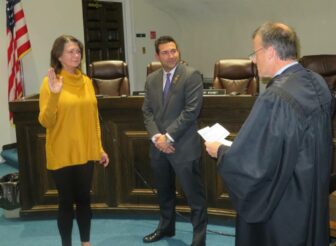 Town Clerk Vida Stone, left, is sworn in for another term.

Boy Scout Troop 63 performed a flag ceremony and led everyone in the Pledge of Allegiance, and Virginia Grabovsky a Masuk High School student, sang the “Star Spangled Banner.”

David York emceed the event and gave the invocation and the benediction. The ceremony was followed by a reception in the lobby with refreshments provided by the Monroe Republican and Democratic town committees.

Rising to the challenge 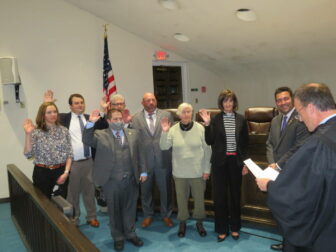 In his speech, Kellogg expressed pride in how Monroe rose to meet the challenges posed by the COVID-19 pandemic, by maintaining public services at Edith Wheeler Memorial Library, opening its parks and pool, and ensuring roads were plowed and paved, while Community and Social Services provided assistance to those in need.

Kellogg also spoke of how the town administered vaccines through the efforts of town staff, the Monroe Health Department, Emergency Management and “the incredible generosity of a small army of volunteers from both the Monroe Community Response Team, or CERT, and our Regional Medical Reserve Corps.” 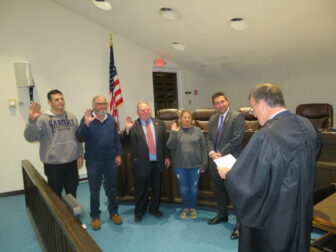 Board of Education members are sworn in, including from left, Justin Orlando, Jerry Stevens, Dennis Condon and Christine Cascella.

“Two years ago, it seemed like the economy of the entire nation, if not the world, was in jeopardy of collapse,” Kellogg said. “While the economic impacts were real, and they continue to this day, we have emerged strong.” 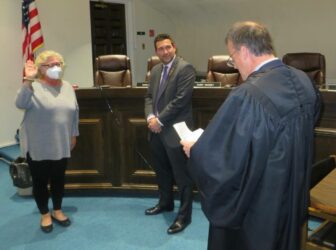 Mary Hall is sworn in as a member of the Board of Finance.

But the first selectman said there is still more work to do.

“To our staff and our elected and appointed officials, my message this year is, now more than ever, we must be extremely mindful of our duty, our obligation to rise to the challenges of the next chapter for Monroe,” Kellogg said.

Amid a pandemic that has slowed, and even paused, some of Monroe’s long term projects, and challenges such as supply chain issues, Kellogg said town officials “must be laser focused on serving our community and getting the job done.” 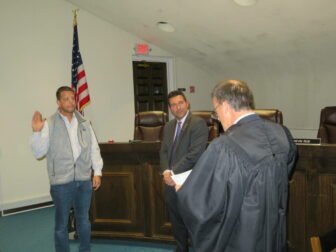 Robert Westlund is sworn in as a member of the Planning and Zoning Commission.

“Facility improvements such as our EMS headquarters are back on track,” he said. “Now we must finish off our strategic plan for municipal facilities and start to plan for other projects in the future, such as proposed improvements to our Senior Center.”

The first selectman noted how a plan for a new athletic field in Wolfe Park, which had been in the works for several years, is now close to coming to fruition, trade permits can now be obtained online and building permits are not far behind. 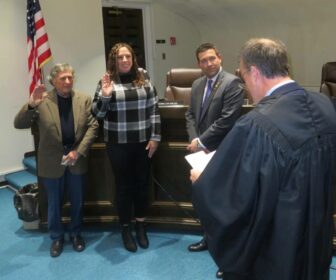 Planning and Zoning alternates, from left, Domenic Paniccia and Nicole Lupo, are sworn in.

“We will keep Monroe moving forward, but now with a greater sense of urgency and obligation,” Kellogg said. “There can and is a wonderful collaboration in Monroe.”

The first selectman encouraged everyone to be positive and work together for the greater good of the entire town.

“One thing for me has not changed from two years ago,” he said. “I remain very proud to say I am the first selectman of Monroe, because I am very proud of this community and this town.” 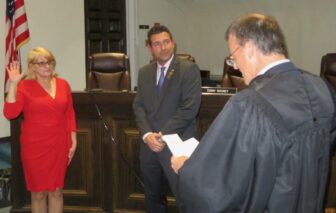 All of the officials elected in the 2021 Municipal Election are: 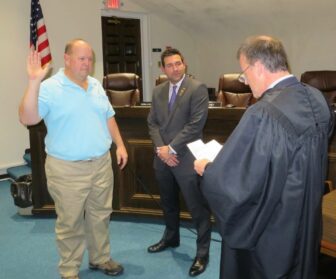 Treasurer Patrick O’Hara is sworn in.

Board of Finance: Republicans Michael Manjos and Greg Beno, and Democrat Mary Hall. 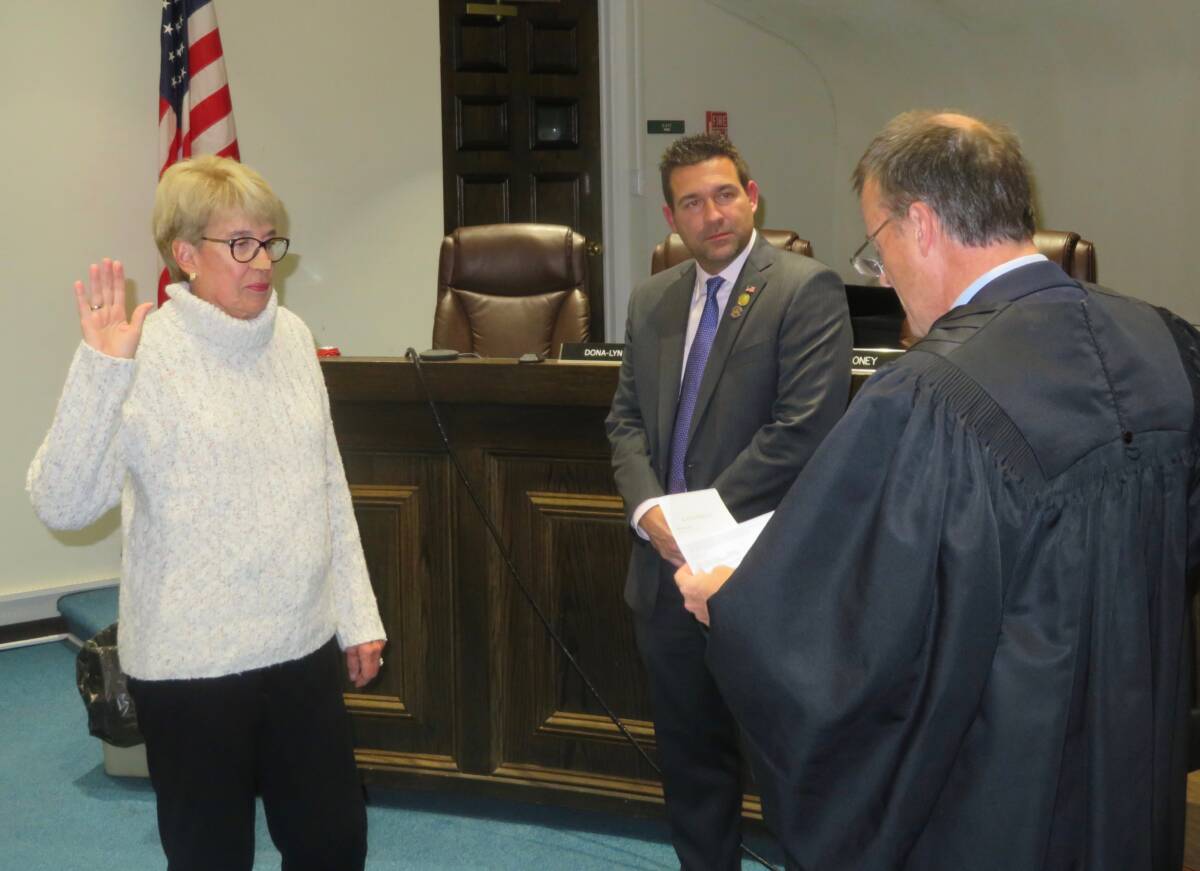 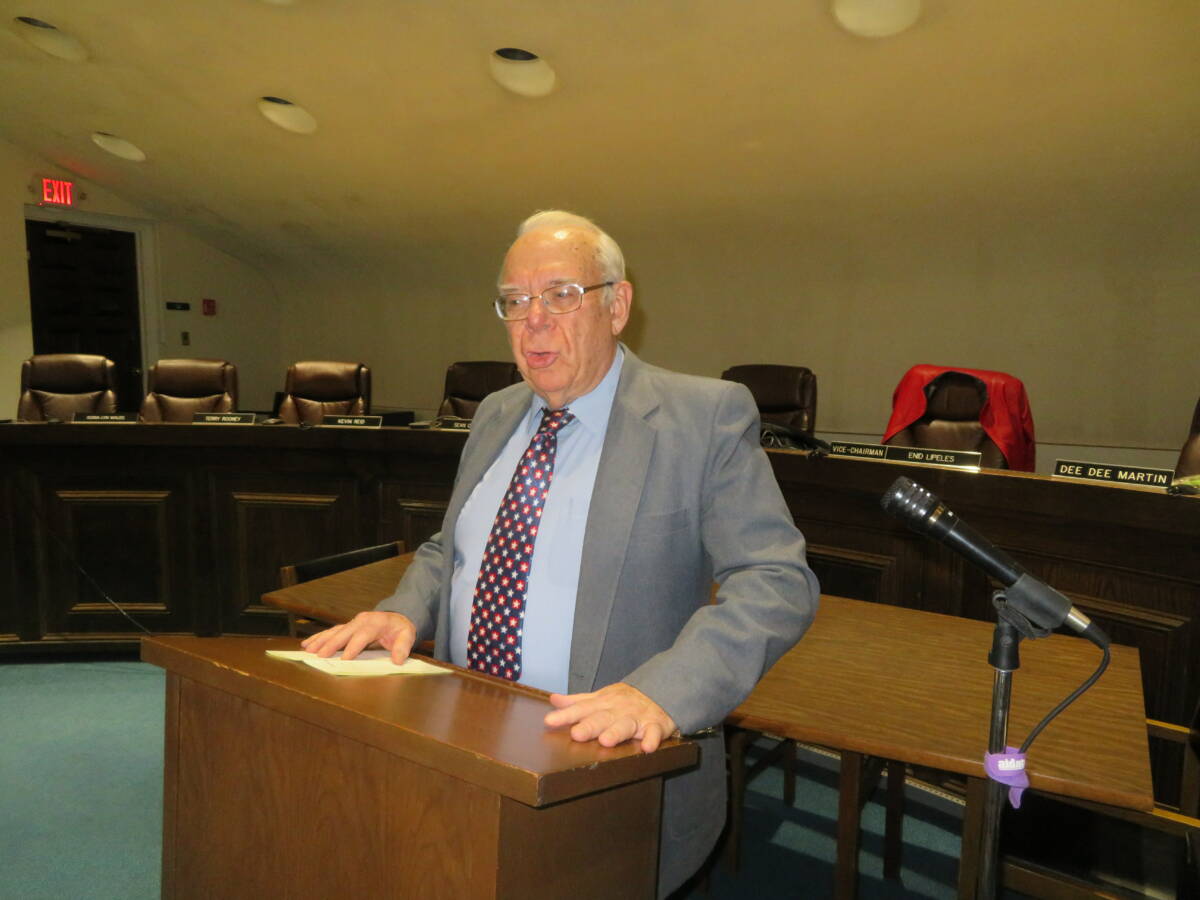