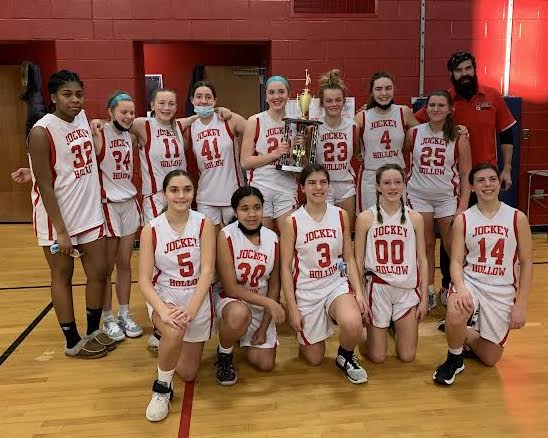 The Jockey Hollow eighth grade girls basketball team poses for a picture with the trophy after winning the championship at home Thursday.

“The main parts of our game, our fast break points, wasn’t there, so we had to adjust and really work hard with every offensive possession,” Lions Coach Robert Troesser said. 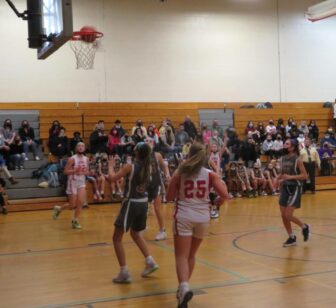 Charlatte hits a three for Jockey Hollow in her school’s 36-33 home victory over Hillcrest Thursday.

Once Jockey Hollow started making some shots, Troesser’s players got fired up. “Then all parts of our game started to click towards the end of the game,” he said.

The Lions finished with an overall record of 17-0.

It was an historic day, when JHMS’s girls and boys teams both played in the league championship on their home floor. The boys also won, beating Roger Ludlowe 55-40.

Baily was Monroe’s top scorer with 11 points, followed by Maddie, Grace K. and Abby Y., who had six points each. Charlatte had five points and Abby T. had two.

Maddie had a rebound and a layup to increase the Lions’ lead to 34-28 with about 3:36 left in the game. After Hillcrest pulled to within four, Baily made a layup for Jockey Hollow, putting the Lions up 36-30 to end Monroe’s scoring.