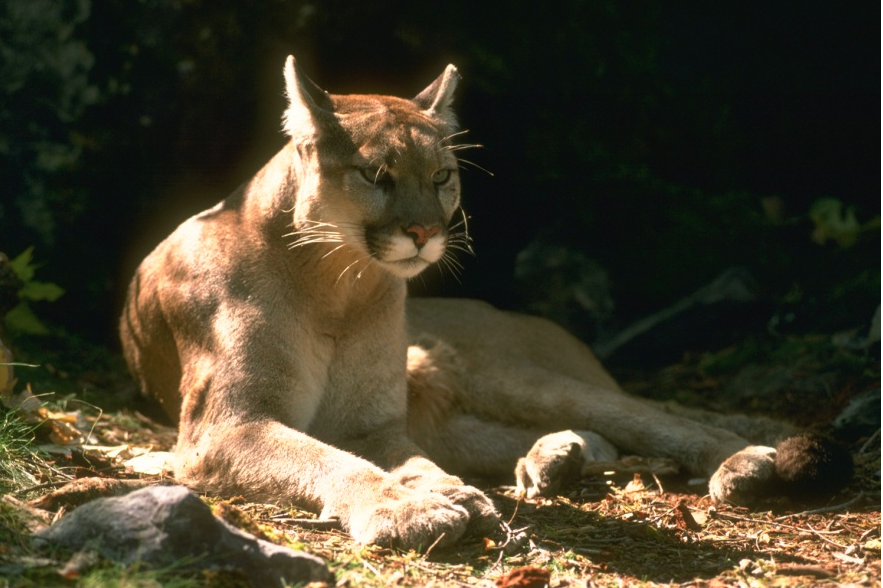 This mountain lion photo is from the California Department of Fish and Wildlife website, wildlife.ca.gov.

An Edge Hill Circle man told police he believes he saw a mountain lion on Wrabel Circle on Sept. 16, and Animal Control Officer Ed Risko says it’s possible that a wildcat was in the area, adding people sometimes take an animal as an exotic pet and lose it or let it go when they can’t take care of it.

However, in this case a site inspection was performed and no tracks, scat or attractants were found, according to Risko.

A sighting report was completed and the Connecticut Department of Energy and Environmental Protection was notified. The resident was given a species fact sheet with common cautions.

According to a Monroe Police Department Animal Care and Control Unit report, there is no evidence of a reproducing mountain lion population in Connecticut. 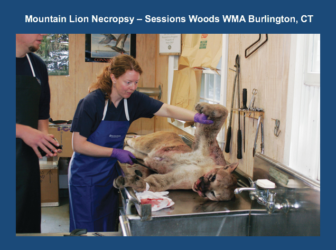 It says genetic testing revealed that a mountain lion hit by a car and killed on the Wilbur Cross Parkway in Milford on June 11, 2011 originated from South Dakota and had traveled to Connecticut though Wisconsin and Minnesota — a distance of around 1,800 miles a record distance for a land mammal.

Mountain lions don’t usually travel more than 100 miles from where they are born.

Daniel C. Esty, who was DEEP Commissioner at the time, had called a mountain lion being in Connecticut an “anomaly.”

“Mountain Lions became scarce in the East after the bounty system wiped out most predatory animals,” according to research in the MPD Animal Care and Control Unit report. “Today, Mountain Lions are found in the mountainous regions of the West. There is also a small population in southern Florida.”

However, Massachusetts residents have reported sightings. Often there are mistaken reports, when people actually saw other animals. Cougars are commonly mistaken for wild bobcats, fishers and coyotes, as well as domestic house cats and dogs.

There are records of two confirmed mountain lion sightings in Massachusetts, where evidence requirements were met. In April of 1997, experienced tracker John McCarter found scat near a beaver carcass at the Quabbin Reservation.

The second case, Department of Conservation and Recreation forester Steve Ward photographed a track trail in the snow near the Gate 8 boat launch area of Quabbin Reservoir in March of 2011. According to the MPD report, these tracks could have been made by the mountain lion killed on the highway in Milford, Conn.

Eastern cougars (mountain lions) do not have a native, self sustaining population in New York State, according to the MPD report, which adds the animals have been absent from this state since the 1800s, though there have been a few isolated sightings of mountain lions not native to New York.

A couple of the sightings involved captive mountain lions that escaped licensed facilities in New York State. Another sighting was of a wild cougar that entered the state after an 1,800 mile trek from its native population in South Dakota.

How to report a sighting

If you believe you have seen a cougar, check for tracks, scat or other signs that may have been left by the animal and take photos of these signs, and, if possible, photograph the animal, according to police.

When taking photographs of tracks, police ask that you include an object of known size,  such as a quarter or a ruler, next to the track. Place a can or bucket over the tracks to preserve them for examination by wildlife experts.

The MPD Animal Care and Control Unit’s report includes a fact sheet about mountain lions, which has many common names, including “puma, catamount and panther.”

Next to the jaguar, it is the largest North American cat. Weights range from 80 to 225 pounds, but the average is 140 pounds. Its length varies from five to nine feet, including a 26 to 32 inch tail, according to the report.

“Cougars have long, slender bodies and small, broad, round heads. Ears are short, erect and rounded. The short fur is usually tawny (brownish red-orange to light brown), more tan in the summer months and grayer during the winter.

“The muzzle, chin and underparts are a creamy white. Black coloring appears on the tip of the tail, behind the ears and at the base of the whiskers on the sides of the muzzle. Immature cougars are paler, with obvious dark spots on their flanks.”

Among other facts in the report, females mate every two-to-three years and produce a litter of two to three cubs. Most births are in the spring. Cubs leave the den when they are six months old, and weigh 30 to 40 pounds, to accompany the female on her kills and occasionally hunt with her individually.

A young male may leave at one year of age, but most cubs remain until they are nearly two. The average life span of cougars is about eight years.

Cougars hunt for deer, elk, occasional livestock and any smaller mammals when the opportunity arises. The preferred meat is deer and cougars kill around one a week. Cougars are solitary, territorial hunters.

One thought on “Gulp! Does Monroe have a mountain lion?”