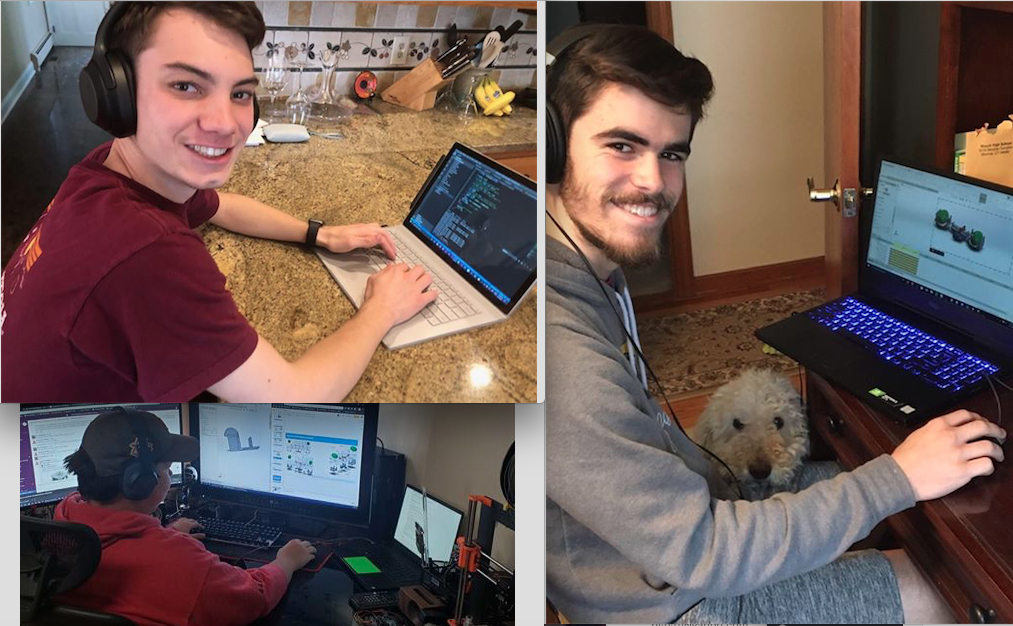 MONROE, CT — A shortage of lifesaving ventilators, particularly in New York, has been in the news as the country grapples with the global outbreak of COVID-19, a disease that affects the lungs in the most serious cases.

Columbia University’s school of engineering is hosting the Columbia DIY Ventilator Challenge, bringing together the best minds to design makeshift emergency machines as a stop-gap measure, while critical patients wait for care.

Among the 330 participants is a team with Alexander Moreno of Monroe, a freshman studying civil engineering at Columbia, who recruited two fellow Masuk High School alumni he had befriended on the robotics team.

“Obviously, there’s a big problem,” Moreno said of the ventilator shortage. “This project is a great way for us to apply the skills we learned from robotics and other things. It’s a nice way to have some fun and do something important and necessary.”

The other two Masuk alums interviewed on Zoom Tuesday are Ryan Nicholas and Zachary Chin.

Nicholas, a sophomore at Virginia Tech, is studying computer science. “I want to do something I feel can be helpful when I program,” he said. “I could use my skills in a way that it can help people who need these ventilators.”

“I myself am asthmatic. I would be concerned if I got it,” Nicholas added of COVID-19.

Chin, a freshman at Drexel University, is studying mechanical engineering. He misses the thrill of working together with a common goal, while competing in robotics tournaments at Masuk.

“Ever since going to college, all of our engineering projects have felt kind of arbitrary, just for a grade and not really for any reason,” Chin said. “So joining this kind of brings that feeling back of working toward a cause. It feels good to work with these guys again — and towards something beneficial.” 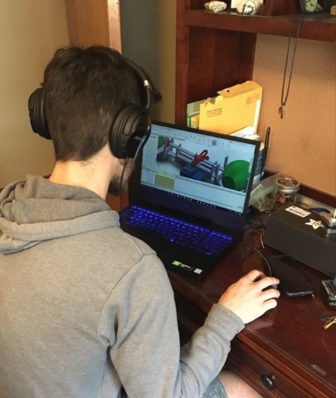 Alexander Moreno works on one of his team’s ventilator designs. Contributed

On Friday, Columbia University sent out an email inviting students, faculty and staff from all Columbia schools, as well as external makers, inventors, and clinicians, to participate in the Columbia DIY Ventilator challenge.

Moreno said he and his teammates have been working around the clock ever since. His team came up with two ventilator models.

Chin said the main body design could be made with something as simple as cardboard. “You just need 3D printer parts and you can get parts from Home Depot,” he said.

Moreno and Chin made one design together and others on their team came up with a different model.

“We will submit both,” Moreno said. “Both have pros and cons. Each one can serve a very important gap in this field.”

“The one Zachary and I worked on was more robust,” Moreno said. “It’s a little bit more expensive, but more functional. It actually operates with two bags at once at entirely independent frequencies and pressures. We felt that could be helpful.”

Chin said the ventilator could be placed between two beds with tubing extended as needed, helping patients to breath at different rates off of one machine and one motor.

“The other design is much more minimalistic,” Moreno said. “It has one bag and is easier to produce. Both have their advantages.”

On Tuesday, the team had planned to make some last minute tweaks before submitting its designs by the Wednesday deadline.

Moreno said 30 to 50 teams are competing in the Challenge. A panel will narrow it down to 10 finalists, who be given a $3,000 budget to build their design.

Finalists will have two weeks to turn in a video submission of their final product design. The winners will be announced on April 27 and receive additional funds after posting detailed instructions on the Columbia DIY website.

Chin said hospitals could use the plans to build ventilators when their more expensive machines are all taken up, and ventilators could be mass produced by the public as masks are now. 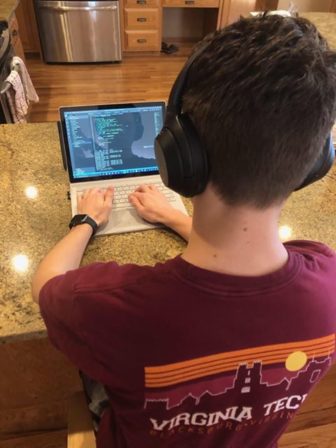 Ryan Nicholas works on the ventilator project in the kitchen of his family’s home. Contributed

William McDonough, a Masuk technology education teacher, is head coach of the Masuk Robotics Team, is proud of his former students for their efforts to make a positive difference.

“They’re all multiyear members,” he said in a telephone interview Tuesday. “Zach and Alex were the first kids on the team from seventh grade through graduating as seniors — a full six years.”

McDonough and his wife teach Sunday school at Good Shepherd Lutheran Church in Monroe, and he remembers when Chin, who was then a seventh grader, walked up to him and asked how he could make robots.

“I’m not surprised at those three kids and what they’re doing,” McDonough said. “They’re all problem solvers. They’re going to change the world around them.”

It was in Masuk robotics that Moreno, Nicholas and Chin’s friendships were forged.

“It feels good to work with these guys again, because we work so well together,” Moreno said of the Challenge. “I think, in a way, it was kind of a dream for us to do something like that.”

This may not be the last time the trio joins forces.

“We talked about having a start up together,” Moreno said. “If we could start a tech thing and work together as best friends, I would love that. I think we’ll do our best to make it happen some day. It would be awesome.”