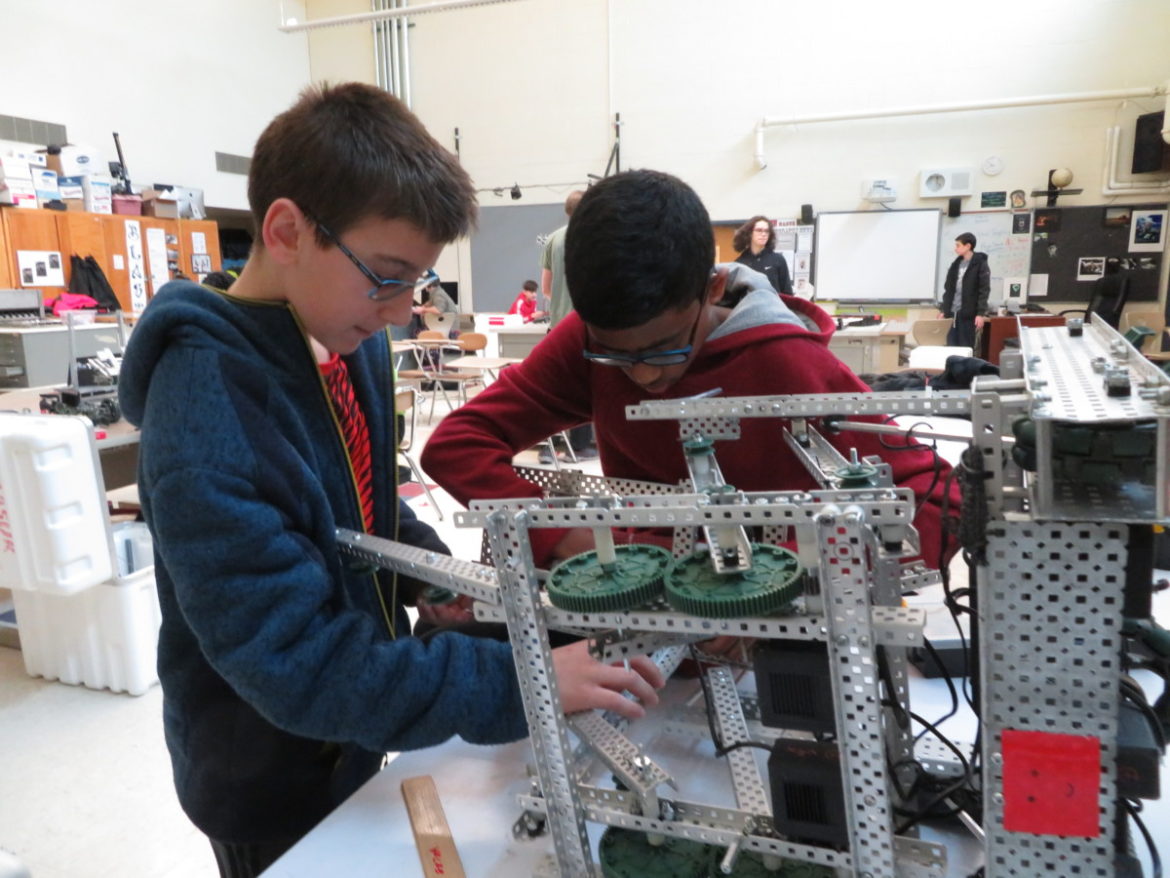 Masuk High School was closed for the winter break Friday morning, but while most students had fun with family and friends, some groups of middle and high school students chose to come to class and spend hours fine tuning their robots for the next competition at Bolton High School on Jan. 4.

McDonough sat down and drank a cup of coffee, while watching teams of students jot down notes, take apart and re-assemble their robots and solve problems on their own.

“Notice, I’m not doing anything,” he said. “I answer their questions, often with another question because I want them to find the answers. This is a student-driven club. We have an eclectic group, from valedictorians to special needs and I wouldn’t have it any other way. We all learn from each other.”

McDonough said Masuk’s robotics teams include teenagers who have jobs after school, student athletes, four all-state cheerleaders and students in band and chorus.

“We are definitely a team,” McDonough said. “We’re more of a sports team than people realize. The competitions are just as intense and the prep time is tons more. Some of these kids are putting in 15 hours a week outside of school.”

Aside from the eight to nine hours of class time every week, McDonough said some students choose to work through their lunches and after school.

“Sometimes teams ask to bring a robot home to work on,” he said. “My only rule is it has to be a team effort. I don’t want one kid or someone’s dad doing all the work. I think the biggest success is students learn it’s okay to fail. When they fail, they learn to pick up the pieces, evaluate what happened and do it a little better the next time — and there’s always a next time.”

Coach Sean Deely, a Masuk graduate, is one of the founding members of the school’s robotics program, which began over a decade ago. He now works at Sikorsky as an electrical engineer and gives back to the program.

“We want to be one of the premier programs in New England,” McDonough said.

Masuk teams have made it to the semi-finals of their division before, as teams battled in eight divisions of around 100 teams, while competing for the world championship. Those in the semi-finals are among the top 32 teams in the world.

McDonough said the tournament includes teams from 17 countries and all 50 states. 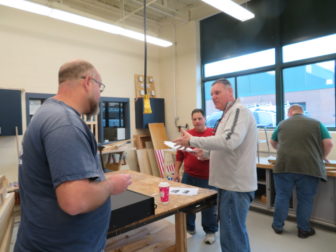 Bryan Amenta, left, a technology teacher from Daniel Hand High School in Madison, works on a robotics field with, from left, fellow tech teachers Erik Savoyski of Danbury High School, William McDonough of Masuk and Michael Wilkosz of William H. Hall High School in West Hartford. They are Event Partners in their region.

“We organize everything in the state and serve as referees during competitions,” McDonough said. “We abandon the kids and they love it.”

A grant from the Robotics Education Corporation Foundation helped pay for the kits for robotics fields, equipment and a second event trailer. It covered most of the approximately $9,000 cost with the Connecticut Technology Engineering Education Association picking up the rest, according to McDonough.

Prior to acquiring the second trailer, McDonough had to use Masuk’s lone trailer to truck fields to competitions as far away as Bolton High School in Manchester, before coming back to Monroe to load up his teams’ equipment and take it back to the competition.

After competitions at other schools, he had to make more trips to bring two trailer loads of equipment and fields back to Masuk.

“I’ve been doing that for five years,” McDonough said.

Now that other schools can borrow the second trailer to bring the fields to competitions, he is only responsible for Masuk’s equipment. McDonough said it saves him significant time on the road. 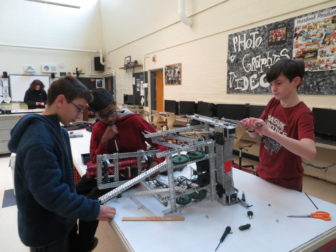 “We’re making additions to it,” Hospet said, pointing to a part on one end of the robot, he added, “when we raised this up, it tended to tip over, so we’re trying to fix that.”

“It’s a lot of challenge-based thinking, so you have to solve a lot of problems,” Giordano said, “and there’s a lot of teamwork.”

At another cluster of desks, Jockey Hollow seventh grader Mackenzie Hanson transcribed notes by hand from a Google.doc to a notebook her team will use at the competition. 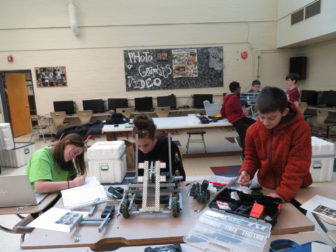 “It talks about what we’ve done in a work session and the problems we faced and overcame,” Hanson explained.

The team, number 8878B, is nicknamed DisneyVexD

Beside her, fellow seventh grader Grace Lein and eighth grader Bryan Giordano worked on the robot. Shivani Anand, a seventh grader, used a computer to type more notes into the Google.doc.

“I like the part where we get to work with our teams to collaborate on things,” Lein said, “and I think the matches are really exciting.”

Masuk senior, Nick DeMayo, worked on a robot with junior, Josh Correll. DeMayo has been participating in robotics for six years and Correll is in his third.

“It’s neat to see what you can create and what other people can do to achieve the same objective,” DeMayo said, “and the competition part is nice. You get to see the payoff of your work.”

As students move up through the robotics program, DeMayo said the robots become more complex, making it harder to troubleshoot problems. “But there are little tricks you learn and you can troubleshoot easier,” he said.

“There’s definitely a level of confidence with it, but you cannot have an ego because you might have the world champs next to you,” DeMayo continued. “You never know what they will pull out of their back pocket.” 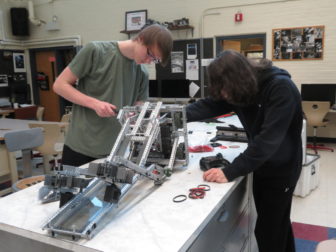 Correll and DeMayo were working on their robot’s sensors to give the programmer more control of it.

“We qualified in our first competition for the regional competition, so we don’t have to worry about all the changes to our robot,” DeMayo said. “We can experiment a little, trying new strategies and mechanisms with less repercussions.”