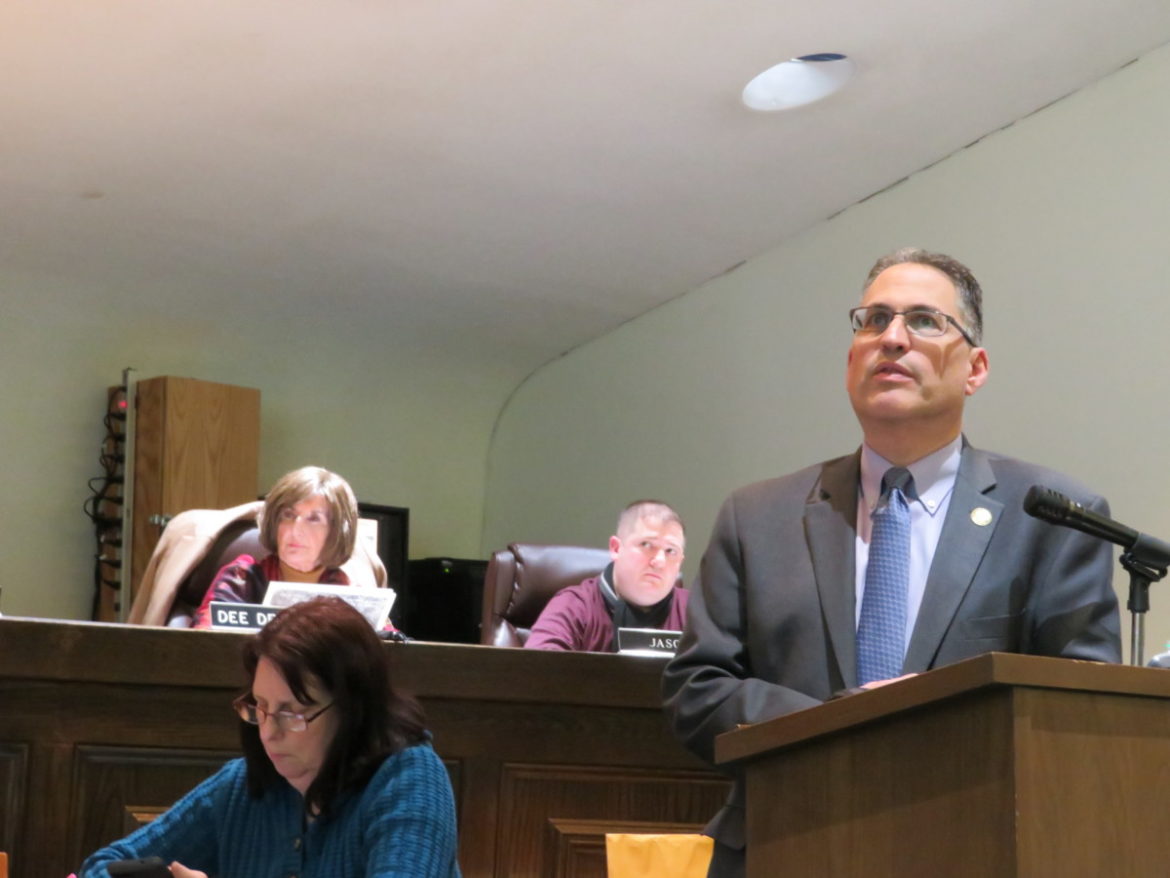 First Selectman Ken Kellogg looks at the screen, while giving a budget presentation to the Town Council Monday night.

First Selectman Ken Kellogg presented a $91.5 million budget to the Town Council Thursday, which includes more money to improve the town’s roads, maintains municipal services and advances capital projects considered to be a top priority, all while limiting the tax increase to 2.6 percent.

However, he was criticized for cutting the Board of Education’s proposal by $500,000, though it still amounts to a 4.01 percent spending increase for Monroe’s public schools.

“I take no joy in these decisions,” he said of reducing the request. “I have to take a hard look at what our budgetary responsibilities are.”

Kellogg said he also had to consider those struggling to pay property taxes. He shared stories of a woman who told him her husband has a good job, but has not received a raise in years; and of a resident who fears another tax increase will force her out of town.

The first selectman said he spoke to an owner of a small welding company, who was looking to move. “The first question he asked was, ‘what’s your mill rate?'” Kellogg recalled. “We have to look at the reality. That’s what businesses will look at.”

Kellogg said he also has to think of the hundreds of Monroe families who depend on the Food Pantry and those who need Project Warmth to heat their homes.

“It’s a higher number than taxpayers have agreed to in the past,” he said of the budget increase. “I hope they will approve it. I know it’s a number some will have concern over, but it is a number I’m willing to propose.”

Though the Town Council does not decide on the education budget, some Democrats and parents used the public comment session to voice their displeasure over Kellogg reducing the proposal for Monroe’s schools, since it was part of his presentation. Kellogg is a Republican.

Nick Kapoor, a Democrat serving on the Board of Education, said he was speaking on his own behalf when he told the Council how the board deliberated on the education budget for 17 hours before cutting the superintendent’s proposal by $500,000 at the last minute.

Educators still do not know what to cut for 2020-21 to absorb the reduction, but now have to deal with another $500,000 cut from the first selectman, according to Kapoor. He asked Kellogg what he would like to see removed from the budget to satisfy his cut.

“We are shortchanging the Board of Education another year for the town to come in and save us,” Kapoor said, alluding to deficits in health insurance and special education in the current budget.

“Why don’t we put out a budget that we need for education and to run the town and let the voters decide?” Kapoor asked. “It’s a disingenuous cut, especially by the first selectman, who didn’t attend any of our meetings. This is not an honest budget.”

Jason Bean, of Windsor Road, a father of two, said he moved to Monroe for the school system. He said he is willing to pay higher taxes for education, so long as the money goes where it is supposed to.

“I don’t care about the roads,” Bean said. “Avoid the potholes, educate the kids.”

Dr. Alan Vaglivelo, a Democrat serving on the Board of Education, estimated that 17 teachers will have to be cut, increasing class sizes, which he said would hurt students performing below grade level the most, as they fall further behind with some requiring special education services.

“I want kids to have the opportunity for the same education my children had,” Vaglivelo said.

Susan Koneff, a retired teacher and the former Democratic registrar in town, estimates the first selectman’s budget proposal would mean losing 10 to 14 teachers.

She accused Board of Finance Chairman Michael Manjos and the first selectman of demanding that the superintendent of schools come out with a small enough number to get budgets passed over the last few years.

Koneff said it helps them get reelected, but hurts the schools and leaves large deficits in the Board of Education’s budget, causing damage to the reputation of Superintendent of Schools Jack Zamary, who is suspended, pending an investigation focused on budgetary oversight and leadership issues.

“You can’t ask a man to row a boat and then tie his hands behind his back,” Koneff said.  “It’s a power grab, ‘we’ll tell you what to propose, we’ll cut it, then come in on our white horse to appear to rescue you.'”

The other side of the story

Lee Hossler said he and his wife moved to Monroe 50 years ago and their son went through Monroe’s school system and went on to graduate from Penn State, adding he now has a great job.

“My house is worth less than it was 10 years ago and taxes have gone up and up,” Hossler said, adding he has to dip into his retirement savings to stay in town. “It’s the other side of the story. I’m very happy to see people with good jobs, who are willing to pay more, but I can’t.”

Patrick O’Hara, a Republican serving as town treasurer, said he commends the first selectman for limiting the spending increase for town services to 0.6 percent at a time of constant cuts in state aid from Hartford.

Of the education budget, O’Hara said class sizes are determined by the teachers’ contract, which says 25 students.

The teacher’s contract says, “The Board shall make every reasonable effort, prior to the start of the school year, to maintain class sizes that do not exceed approximately twenty (20) students pre-K, twenty-five (25) students, K-8, and twenty-eight (28) students, 9-12.”

If the first selectman’s budget is adopted without changes, the mill rate, which residents use to calculate individual tax bills, would rise from 35.58 to a projected tax rate of 36.51 mills for a 2.62 percent increase.

“Due to the state-mandated property revaluation that was just completed by our Assessor’s Office, the mill rate increase is not in proportion to the tax levy,” Kellogg said. “Since the property revaluation affects each taxpayer differently, I encourage taxpayers to go to our online calculator to research the potential impact to your tax bill.”

To view the online calculator click on this link.