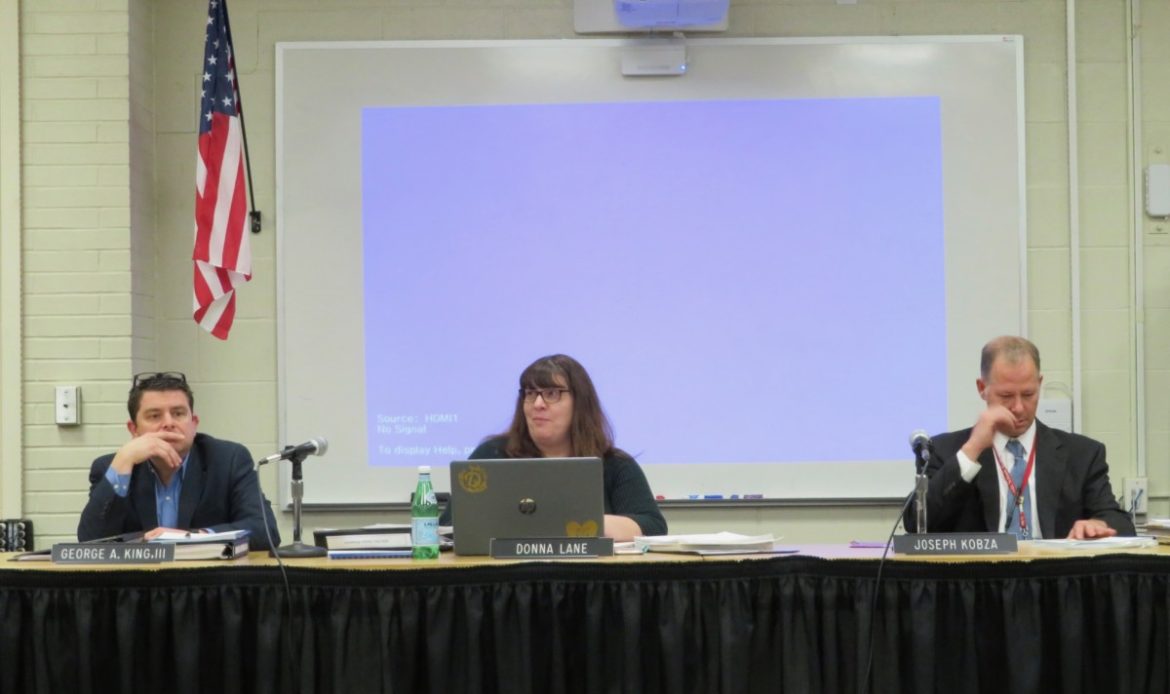 Board of Education members, from left, Vice Chairman George A. King III and Chairwoman Donna Lane moments before the budget vote Tuesday night. To the right is Acting Superintendent of Schools Joseph Kobza.

Board of Education members put in long hours reviewing the spending plan for the 2020-21 school year over several workshops, but the clock was running out Tuesday night and they had to vote on a final budget to meet today’s deadline.

No one was happy with the budget proposal they passed. David Ferris, the board member who motioned to cut Zamary’s proposal by $500,000, said the board must continue working to find savings and efficiencies in budgets going forward.

“We need to continue to work past tonight,” Ferris said. “I don’t feel ready to vote tonight, but we have a deadline.”

Ferris said he could not support a 5.7 percent increase, but added there is no “fluff” in the proposal.

Vice Chairman George A. King III said the board put more diligence into reviewing this budget than in any other cycle.

“I think we uncovered a lot, but I agree with David, there’s more to do,” King said. “We need to start thinking about getting ourselves right-sized and doing business differently.”

The school district has been grappling with deficits in special education and health insurance, while administrators are dealing with two years of spending freezes, but the Republican majority said they must balance the district’s needs with what taxpayers can afford.

Chairwoman Donna Lane said she did not want to cut the superintendent’s budget.

“In a perfect, ideal world we could pass the 5.7 and feel confident voters will support this,” Lane said. “I also have to look at this realistically with what is reasonable. We’re out of time.”

A town charter change allowed the deadline for the school board to submit its budget to the first selectman and Board of Finance on Jan. 23, rather than Jan. 9 to allow more time for review, but Lane said she wished they had three more weeks this year.

“I just don’t think we can fix it all in one year,” King said.

Lane agreed the board may have to make changes in increments over several years.

Shannon Monaco, the board secretary, agreed with the need to balance education needs with what people can afford. She said unfunded state mandates are another problem that should be addressed.

Though board members agreed it was a bipartisan process, the budget passed 6 to 3, along party lines, with Republicans Lane, Ferris, King, Monaco, Jeff Fulchino and Christina Cascella in favor and Democrats Nick Kapoor, Dr. Alan Vaglivelo and Jerry Stevens voting no.

Kapoor contends the Board of Finance has been dictating smaller increases over the years, which he said compounds the problem of falling behind in meeting school district needs.

“Of course the Board of Education wants to be fiscally responsible to the taxpayers of this town of which we all are as well, but when putting out budgets that are not realistic to the town to come in at a ‘number’ and then blowing through that number, that is disingenuous,” Kapoor said.

While going through the budget line-by-line, the school board actually came up with a plan carrying a 5.79 percent spending increase before cutting it back to 4.88. Kapoor said he wanted the opportunity to bring the 5.79 version to referendum.

“We can tell the story of this budget,” he said. “If we put this budget out, and the voters say no, then we will have to have a very difficult discussion, but I hope that as many residents as possible can attend the workshops coming up in the next several months to hear the story of this budget. It is hard to vote ourselves a tax increase, but we are doing it for the future of our children. Today’s students are tomorrow’s leaders and they deserve the best education possible.”

Vaglivelo said there are too many spending freezes with “cans getting kicked down the road.”

Stevens, Vaglivelo and Kapoor caucused after Republican board members caucused during a recess in Tuesday’s meeting. The Democrats came up with this statement:

“We, the Democrats, cannot support this $500,000 cut tonight. We don’t know where the cut is coming from. After more than 17 hours of public budget workshop sessions we couldn’t find $500,000 then, so how are we going to find it now? We went through this budget line by line and we said that a 5.79% increase is what we need to maintain the Monroe public school system and budget properly for all different costs – SPED, transportation, etc. – in the upcoming year. Is it a large increase? Yes. However, we are trying to budget correctly and do the best for our students. We would rather pass the budget as is and over the next two months continue to find savings and efficiencies and give the Board of Finance a cut that we believe we can absorb. We can’t support a $500,000 cut at the last minute.”

3 thoughts on “School board trims budget increase to 4.88 percent”