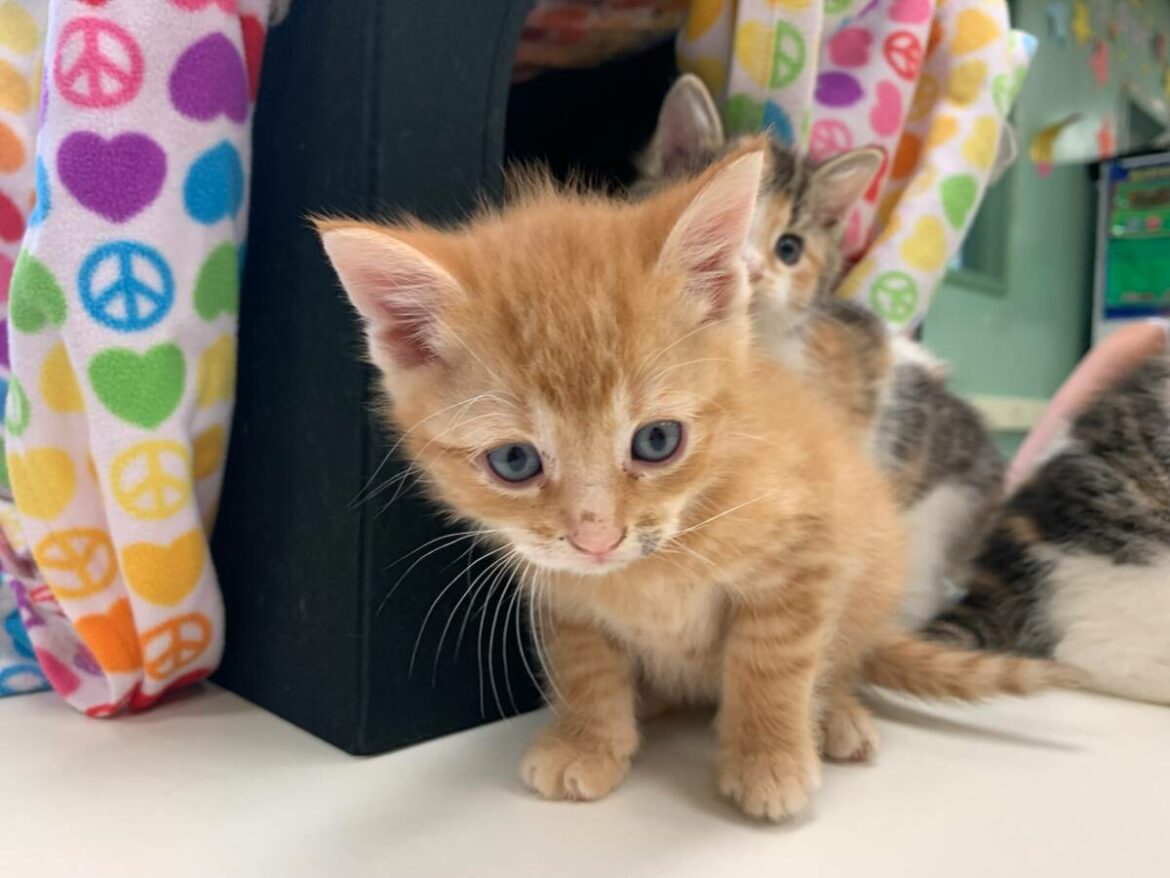 Chief, a four-week-old stray kitten, got stuck under a shed at Fairway Acres on Wheeler Road.

MONROE, CT — A tiny orange kitten got stuck between concrete blocks beneath a community storage shed at Fairway Acres on Wheeler Road and it cried for help, before residents and emergency responders tried to pry it free.

On Aug. 15, Monroe firefighters used an airbag to lift the shed a few inches off the ground and Fire Capt. Chris Krize rescued the kitten, cradling it in his arms. JoAnn DeAngelo Roman, who lives in the senior housing complex, said the kitten was named “Chief” in honor of the firefighters who saved him. 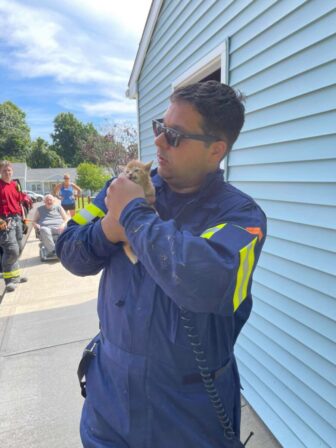 Prior to the rescue, Roman said she believes Chief and his sisters, two calico kittens, may have been chased by a coyote, retreating to the safety of the shed, where Chief, the runt of the litter, got stuck.

“The kittens have been adopted and are doing wonderful in their new forever homes,” Roman said. “God bless our firemen and police. Monroe has heart.”

Roman was doing her laundry in the community building, when one of her neighbors told her a kitten was stuck under the shed.

She asked Roman for help, because Roman rescues and fosters cats.

“I saved like 50 kittens throughout my time living here,” said Roman, who moved to Fairway Acres with her husband, Stephen, 13 years ago.

The couple has two cats of their own, Punky and Sammie Girl.

“They were rescued when we were living here, but not on the complex grounds,” Roman said. “My friend called and told me they were stuck in a sewer in Bridgeport — and I actually went in the sewer and got them. Where they end up, it really is a crying shame.”

Roman and her friend used a shovel to gain access to the kitten, but could not grab it without hurting the animal. “We would have broke his neck,” she said.

Roman said Chief was trapped in the “kitty corner” of the shed, where there was a round cement block. The kitten’s head was in the corner and his body was hanging, she said, adding, “his head was wedged in there.”

“The young police officer had come and he was just wonderful,” she said. “He even got down on the ground and tried, then said, ‘this is a job for the fire rescue. We’ll hurt him.'”

“Numerous individuals were unable to reach the kitten by hand, so the fire department used its high pressure airbag rescue system and cribbing to raise part of the shed by just a few inches to allow access to remove the kitten,” Catalano said. “Two fire department trucks and about 10 firefighters were on scene for approximately 15 minutes.”

A friend of JoAnn’s neighbor already had Chief’s two sisters. Roman got a carrier for the three kittens and the animals stayed with her for the night.

“Overnight, I fed them. I cleaned them up. They had a beautiful place to stay for the night,” Roman said. “I gave them kitten milk. I have the syringe, the whole kit and caboodle.” 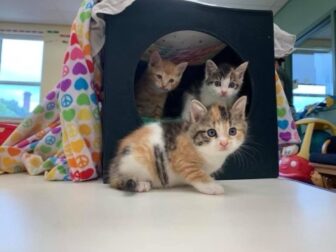 Chief, the orange kitten in the back row to the left, and his two sisters were adopted to forever homes.

The calicos went to two teachers and Chief went to Pinto’s daughter.

Though Pinto and Wasserman also foster cats and kittens, Roman said this was the first time she had worked with them. “I usually work with Newtown Animal Control and they are fabulous,” she said. “I’ve donated money to them before. They’re so good.”

Roman said the kittens’ mother is still living around the condos. “We’re just trying to catch her,” she said. “We have the cage. She’s smart. I’ve been trying for months.”

All of the kittens have seen veterinarians, then Wasserman, Pinto and Roman pitched in to buy a $100 gift certificate for the firefighters to use for pizza or whatever they want to spend it on.

Roman said she does not know how long Chief was stuck under the shed, but, from the time she came to help, she said the rescue took about an hour.

“It’s really a happy ending,” Roman said. “I just want to let the town know that Monroe has heart. For all of them to come out for this wee little thing in hot weather, God bless them.”

Videos of the rescue

One thought on “Firefighters, police, rescue kitten trapped under a shed”