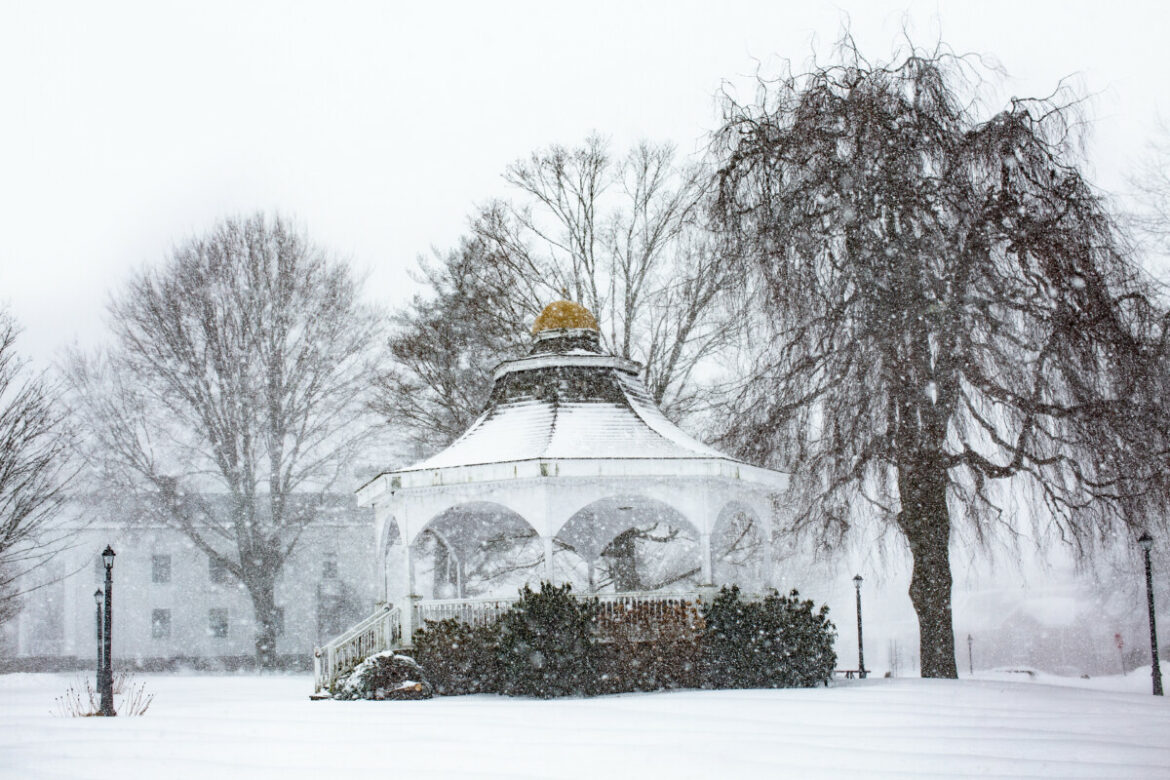 Melissa Garrity took this photo of the gazebo in front of Monroe Town Hall.

MONROE, CT — Board of Finance members continue to find savings to whittle down the projected tax increase in the $91.5 million town budget proposal for fiscal year 2021-22.

Town officials anticipate that health insurance rates will come in lower than expected, and the town may receive $176,000 more than anticipated in Education Cost Sharing grant funds, according to First Selectman Ken Kellogg.

Though the state legislature still must act on Gov. Ned Lamont’s budget proposal, Kellogg said it currently does not include a $176,000 cut in state aid he accounted for in his town budget proposal.

During a budget workshop last Thursday, Board of Finance Chairman Michael Manjos noted the numbers for the medical insurance are preliminary.

“I’ll recommend we leave that to finalize towards the end, because hopefully we’ll have better numbers in the next month,” he told the board.

Finance Director Ronald Bunovsky Jr. said the school district anticipated an 8 percent increase in medical insurance rates, but has since received guidance suggesting it will be 4 percent.

He said 4 percent verses 8 percent equates to savings of about $280,000. “That wouldn’t necessarily be my recommendation, but that would be on the high end,” Bunovsky said of reducing the overall budget proposal.

“I can’t remember when we had a 4 percent increase on medical,” Manjos said. “I love good news, but I’m skeptical.”

Deputy Finance Director Heidi Meade said the municipal estimate was for a 6 percent increase in medical insurance rates. If it is actually 4 percent, the town could save $52,000, she said.

Manjos said it sounds like the town could save anywhere from $100,000 to $250,000 on medical insurance across the board.

“From the sound of it, there will be something to cut here,” he said. “But I don’t see any moves at this point.”

The town will receive millions of dollars in federal aid from the American Rescue Plan, a federal plan to boost the economy amid the COVID-19 pandemic.

The funding cannot be used to provide a tax cut and Kellogg the said U.S. Treasury will come out with more accurate numbers of what the town will receive and direction on how the money can be spent.

The first selectman praised Meade for tracking every penny the town spends on the COVID-19 pandemic and working with FEMA to match expenses with grants.

This Thursday, April 1, the Board of Finance will review the Board of Education budget. The following week, Manjos said he wants to do a deeper analysis of how the town uses its undesignated fund balance.

“I’m not of the inclination of calling in every department to go line-by-line,” Manjos said. “But if there are any specific areas we want to dive deeper on, we can direct them to Ken. We’ve probably got as much detail as we ever had.”

Fellow board members agreed, including Vice Chairman John Ostaszewski, who praised town department heads, Kellogg, Bunovsky and Meade for putting together a comprehensive budget, and the Town Council for its thorough review.

Ostaszewski also complimented Superintendent of Schools Joseph Kobza for how his office provided information for the finance board.

Steve Kirsch, a finance board member, made a request that Kellogg and Public Works Director Chris Nowacki provide a list of roads that were worked on in 2020, and which roads officials plan to work on in 2021, as well as for the first half of 2022.

In his capital budget proposal for 2021-22, Kellogg recommends spending $3 million to improve the town’s roads, using $1 million of approved bonding that was not bonded for during the pandemic, a $470,000 road grant, $530,000 from operating expenses, and a 2022 bond appropriation of $1 million.

Kellogg said public works goes out every year to see if the pavement condition index (PCI) of the town’s roads changed since the last report. This year, he said they found sections of East Village Road will need work, due to drainage issues and road deterioration that did not exist before.

Manjos said magnate school tuition was not budgeted for two years and the town ended up in court, lost, and owes a settlement in structured payments.

“To me, that doesn’t belong in the operating budget, because it is not an operating expense for next year,” Manjos said. “It is a debt that we owe.”

Instead, he suggested taking the money from the fund balance, using funds the Board of Education returned at the end of the fiscal year.

“We’re going to pay the money no matter what,” Manjos said. “To me, it’s more transparent and better accounting.”

“I agree, it makes sense,” Ostaszewski said. “It shouldn’t be a burden on the taxpayers this year and we should take it out of money we already have in the bank.”

The Board of Finance unanimously approved an appropriation of up to $20,000 for repairs to the Town Hall gazebo. Kellogg said the project is estimated at $16,000, but he wants to include a contingency to protect against any cost overruns.

He said the town code requires that the fund only be used for town purposes and that the principal never be touched.

Kellogg said he had asked Public Works Director Chris Nowacki to evaluate the condition of the gazebo and Nowacki confirmed the need for significant repairs. The project includes replacement of the roof, dome and trim and repairs to the bluestone steps and brick walkway.

Prior to the Board of Finance approval last Thursday, the Town Council approved the appropriation earlier this month.