Police said an officer checked and determined nothing was wrong with the dog, but advised its owner not to run errands with the dog during the summer.

On a hot day, temperatures can rise to dangerous levels in a parked vehicle, making it deadly for dogs left alone inside.

Police said the animal got into the trash container, but was unable to climb back out and cooked in the heat over the long holiday weekend. Animal Control Officer Ed Risko said the remains were removed for cremation.

He recommends installing a locking bar in an attempt to make trash containers animal proof.

Bats in the house

There were no exposures in either incident and police said a resident killed and removed the second bat prior to an officer’s arrival.

A bat species fact sheet and common cautions were provided to the resident, along with exclusion tips for the later end of the summer. Animal Control Officer Ed Risko said bats must be left alone in June and July.

A referral was made for a commercial nuisance wildlife control operator, should the resident want to hire one.

A deer with skin disease 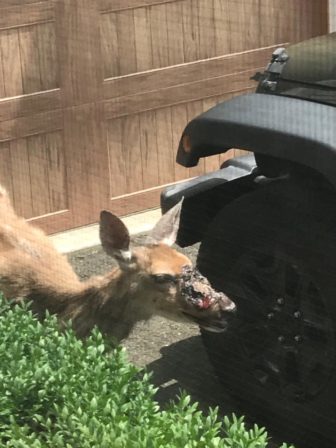 A deer with open facial wounds was seen on Pinto Lane. Contributed

Animal Control Officer Ed Risko said the deer repeatedly tried to lay against the foundation of the woman’s house, apparently to get relief from flies bothering its open facial wounds.

An officer was unable to get close enough to access the animal’s condition. Risko said Connecticut Department of Energy and Environmental Protection biologists were notified.

The DEEP has been watching this deer since June, while trying to identify the skin disease, according to Risko, who said the case is still open pending the state’s plan to treat or remove the deer. 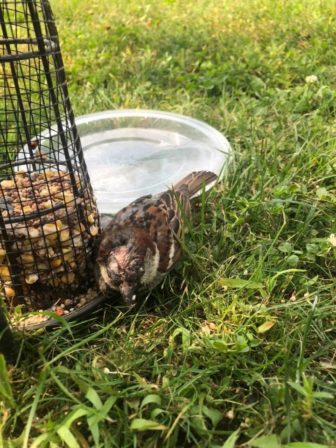 This sparrow found injured near a bird feeder in a yard on Wheeler Road. Contributed

rehabilitation facility in Weston after a resident reported finding it injured near a bird feeder.

A driver on Monroe Turnpike told police he saw a wild turkey hen with six poults in the roadway on the morning of July 8.

Animal Control Officer Ed Risko said the information was forwarded to the DEEP’s Wild Turkey Project. The agency invites residents to keep a tally of all sightings of turkey hens and poults through Aug. 31 for the Wildlife Division’s Annual Turkey Brood Survey.