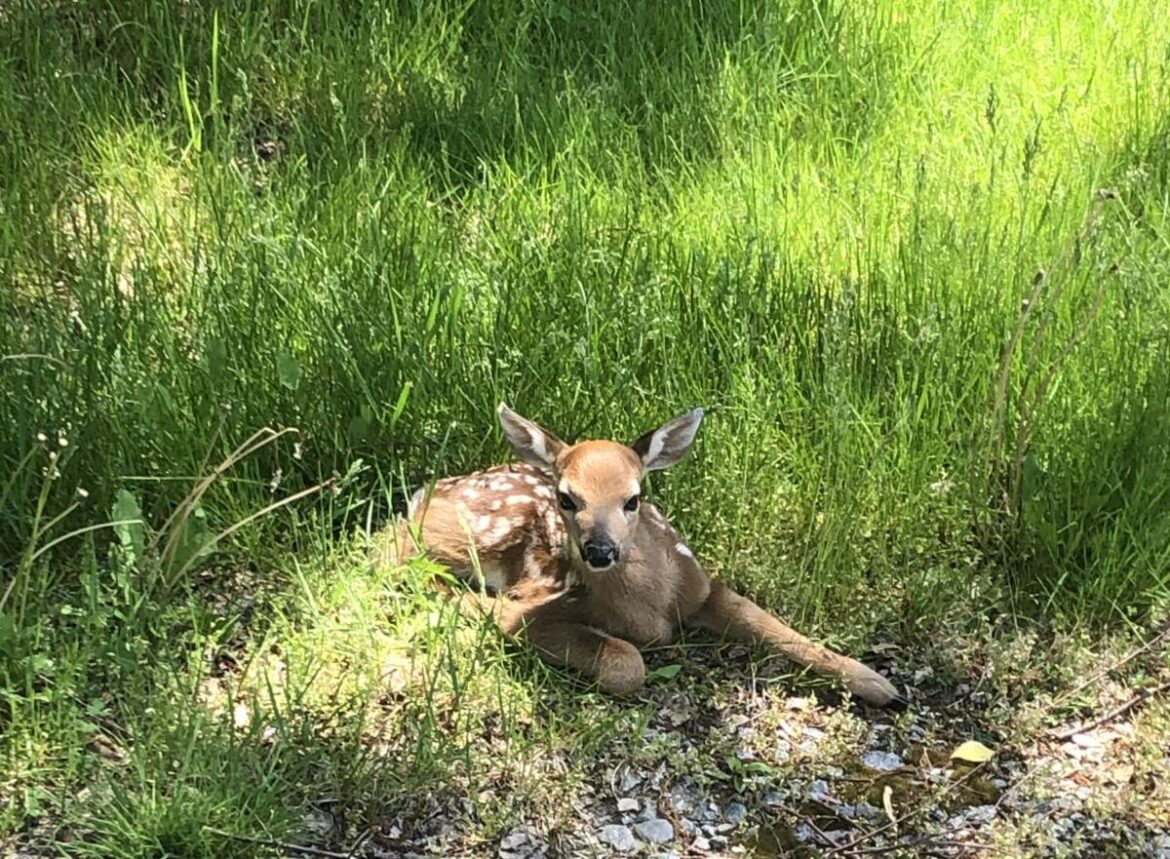 This fawn's mother attacked a property owner's dog on May 20. Photo by Ed Risko

MONROE, CT — Residents are finding baby fawns lying alone in yards all over town. In one case, on May 20, a doe who recently gave birth believed its fawn was threatened by a property owner’s dog, so the deer attacked the pet.

Animal Control Officer Ed Risko said the doe pinned the dog down and stomped him with her hoofs, adding the dog was taken to an emergency veterinary center for sutures to close an open wound.

Risko said it is not uncommon for a doe to attack a dog to defend its young. During his career as an animal control officer in Monroe, he said he responded to three calls involving deer and dogs.

Fawn sightings are on the rise because deer give birth at this time of year and mother’s often leave their young in a safe place, while foraging for food, according to Risko.

“We have been receiving a lot of calls about baby fawns being abandoned and admitting very healthy babies that were accidentally rescued,” he wrote in a recent Facebook post. “Fawns will often be left alone for long periods of time by their mom. It is normal for fawns to just lay there when you approach.”

Risko included signs to determine if a baby fawn needs to be rescued. Among them are: 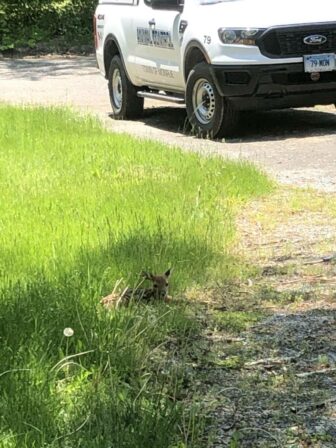 The Monroe Animal Control truck gives scale to the small size of the baby fawn in the foreground. Photo by Ed Risko

Most fawns are born in June. A doe’s first birth is usually a single fawn. In successive years she usually gives birth to twins and occasionally triplets.

For the first month of their lives, fawns remain hidden among vegetation and rarely move more than 30 feet from their birthplace. Their greatest protection is the ability to lie still and remain unseen by predators.

The mother normally feeds nearby and returns at intervals, so the fawns can nurse. Deer parents stay away from the nest area from dawn to dusk to avoid attracting predators.

Unless you know the mother is dead, leave the nest site alone. If you find a fawn and it is sitting quietly, leave it alone.

If the fawn is bleating, call Monroe’s Animal Control Unit at 203-452-3760 or the police department’s general number, 203-261-3622, which is answered 24/7. An officer will determine if the fawn is in danger and must be removed from the site and brought to a licensed wildlife rehabilitator.

Avoid handling the fawn. However, if you handled one, rub it with grass and soil to reduce your scent, then return the fawn to where you found it.

What to do if you find a fawn

If a fawn is obviously ill, lying on its side, kicking, crying, leave it alone. Do not attempt to move the animal, because it may cause further injury to fractured bones.

A light cloth placed over the animal’s head will sometimes calm it. Keep it away from pets and all human activity. Petting the fawn, talking to it and holding it does not comfort it. This is a wild animal. Human voices, odor and touch only add to the stress and will cause additional harm, illness or injury.

When a fawn seems calm, it may be in shock. If the weather is cold, a blanket may be placed over its body to keep it from becoming chilled. In hot weather a cool location, out of drafts, is all that is needed.

Call Animal Control or the Connecticut Department of Energy and Environmental Protection at once.

If an uninjured fawn is seen on or beside the road, do not put it in your car. If the animal can be moved safely, place it about 20 feet off the road and leave the area. The fawn would not be there if the doe were not nearby. She will return to her fawn once the human disturbance is gone.

If a fawn is at your home

If a fawn is seen lying upright, eyes wide open, but flattened to the ground, do not touch it. This is a fawn’s camouflage position. It blends with its surroundings.

Remember it is against the law to keep wildlife in your possession.