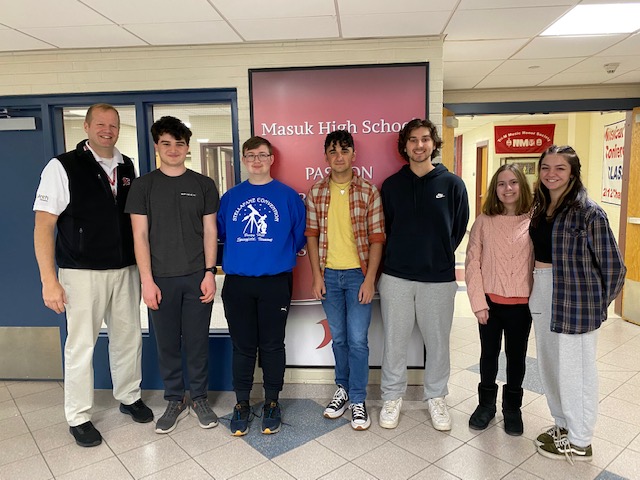 Kevin Giordano, son of Jeffrey and Kathleen Giordano, received the $6,000 Robert Swart Engineering Scholarship. Named in honor of former trustee Robert Swart, the scholarship is meant to encourage and financially assist a student pursuing a career in engineering.

Giordano will attend Northeastern University to study mechanical engineering in the fall. He also received the $500 Senior Science Award, honoring an outstanding senior who has demonstrated the ability to achieve recognition in science.

Brandon Francisco, son of Jeffrey and Michele Francisco, received the $500 Paul W. Broggi Communications Award, honoring an outstanding senior who demonstrated the ability to receive recognition in communications. Francisco will attend the University of Connecticut in the fall to study journalism.

Caleb Nealon, son of Roy and Jennifer Nealon, received the $3,000 Vincent A. Voccia Vocational Award, presented to a senior pursuing a vocational or technical career. Nealon plans to attend the Porter and Chester Institute, where he will study plumbing.

Laurie Salustri, daughter of Christopher and Keri Salustri, received a $2,000 First Runner-up Award for her project submission for the 2022 $15,000 Barton L. Weller Scholarship. Salustri was one of five finalists for her project, “Embedded Systems: Providing Accessible Technology for the Senior Community.”

The Monroe Police Department’s first annual MPD Car Show, sponsored by the Monroe Street Rodders Club, will be held on Fireman’s Field, at the corner of routes 110 and 111, this Sunday, May 22, from 8:30 a.m. to 3 p.m.

The cost to enter is $15 a car and all proceeds benefit Special Olympics Connecticut. Vehicles will include antique, classic, hot rod, muscle cars and custom with the cut off year of 1987. European models are all years.

The event will include a silent auction, a food truck, raffles, a 50/50 raffle and popcorn.

Aside from tournament play, there will be longest hit and throwing contests by age group. The event will be held Saturday, June 18, from 8:30 a.m. to 2 p.m. The rain date is Sunday, June 19. Tournament play, which starts at 9 a.m., will be by the following leagues:

●  Senior League: Slow pitch with Adults 50 or above

Registration with payment is required no later than June 3. Any participant under age 18 must have his or her parent or guardian complete the tournament’s Parental Authorization form. There will be no day of game signups.

Awards will be given to the Tournament League Champions. There will also be a Participation Awards drawing amongst the other teams in each league.

Anyone can also just drop by to test their hitting and pitching skills between 9 a.m. and 2 p.m. While there is no cost for participating in these contests, a donation is appreciated. Awards will be given to the Longest Hit and Pitching Contest Champions by age group.

Information and registration forms are on the Monroe Food Pantry’s Facebook page.

Making a splash for charity 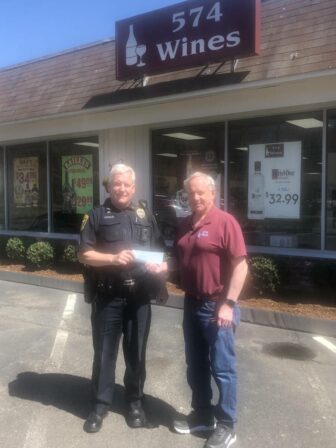 Ty Nicholson, manager if 574 Wines, 574 Monroe Turnpike, recently presented Police Sgt. Pete Howard with an $875 check for Special Olympics Connecticut. On the day of the Plunge at the Park fundraiser, the liquor store set aside 10 percent of the day’s sales for the cause.

Howard said the contribution added to a successful day, in which $47,000 was raised on behalf of Monroe police officers in support of the state’s Special Olympians.

“The Monroe Police Department, along with Connecticut Special Olympics, would like to thank Ty and all of the employees at 574 Wines for their continued support of the athletes,” Howard said.

Nicholson also participated in The Plunge, when close to 80 people ran into the frigid waters of Great Hollow Lake at Wolfe Park.

“I’m very honored to have participated in the plunge and to have raised money on behalf of our police officers to support Connecticut’s Special Olympics,” Nicholson said. 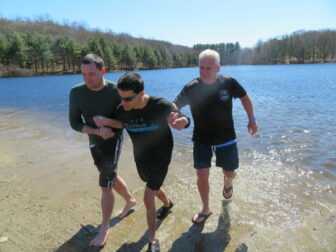 Sgt. Pete Howard, right, and Det. Kyle Stevens help a Special Olympian out of the water after taking the plunge with him on April 2.

Nicholson said he was touched to see Howard, who is retiring this year, and another officer go into the water with one of the athletes, each officer supporting him on one side, then helping him out of the water, so he could participate.

“He was so happy to be part of this,” Nicholson said of the Special Olympian. “It was a very touching moment.”

How did Nicholson fare?

“It took me two hours to feel my feet again,” he said with a chuckle.

Its integrated model incorporates “Neighborhood Kids” and educates children of all learning capacities, emphasizing the importance of inclusion and understanding.

The Early Intervention program focuses on the education of the town’s youngest learners in a half-day program; and the Kindergarten Readiness program prepares next level learners for their upcoming kindergarten experience.

The Kindergarten Readiness program runs from 8:15 a.m. to 1:15 p.m., Monday through Friday.

Parents of children ages 3 and 4 who are interested in enrolling their child in the program for three, four or five days a week should send an email to Jaime Cotter, [email protected], or call her at 203-452-2870.