Bears are involved in a feeding frenzy, while trying to pack on pounds for their long winter sleep. As a result, Monroe Animal Control is receiving more sightings as hibernation draws closer.

The feeding frenzy is called hyperphagia, a period of excessive eating and drinking, according to Animal Control Officer Ed Risko, who said a black bear can eat 15,000 to 20,000 calories a day.

A female resident reported seeing a black bear with yellow ear tags walking from the street and up her driveway on Monroe Turnpike, near Bagburn Road at 10:20 a.m. The bear walked through her yard, heading north.

At 3:06 p.m., a male resident from Crown View Drive reported seeing the bear laying in his driveway on top of several trash bags the animal had removed from a trash container. The bear continued north through the man’s backyard. From the tags, Risko said this was not Bear “217” from the spring. 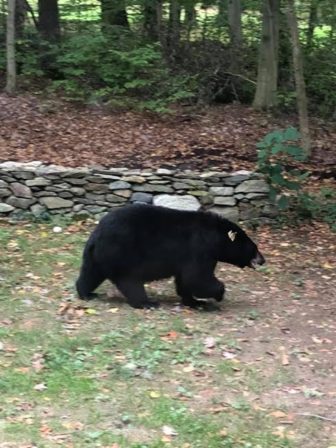 This bear was photographed at Pachaug Trail on Oct. 8. Contributed

At 3:51 p.m., a female resident from Manor Drive reported seeing the bear looking for fallen tree nuts in her yard. The bear continued down Manor Drive, heading north towards Sunrise Terrace.

At 4:15 p.m., another female resident from Manor Drive reported seeing the bear entering her open garage. The animal fled when she startled him and continued in his north direction through the tree line to Sunrise Terrace, toward Downs Road.

At 5 p.m., a male resident reported seeing the bear in his yard on Scholz Road and at 5:15 p.m. the bear was at 237 Cottage Street. Risko said the bear was last seen heading towards the railroad bed by Route 34.

Sighting report forms were completed for each location with site inspections, as officers looked for food attractants. Reports were sent to the Connecticut Department of Energy and Environmental Protection. Species fact sheets with common cautions were given to each caller, according to Risko.

A Maplewood Drive woman reported hearing an animal screaming or screeching in the tree line for around five minutes early in the morning on Wednesday, Oct. 9.

Animal Control Officer Ed Risko said the vocals were similar to a red fox, though no positive identification was made.

“It’s commonly mistaken for an owl hooting,” Risko said. “That bark sequence is thought to be an identification system. Studies indicate that foxes can tell each other apart by this call.”

A red fox with mange

A man reported seeing a sick red fox in the M Cubed Technologies parking lot on Main Street, across from Swamp Road in Newtown, around 10:41 a.m. Friday, Oct. 4.

Animal Control Officer Ed Risko said the description matches later sages of mange, a skin disease of mammals caused by parasitic mites. There were no exposures.

An officer was unable to locate the animal, but a periodic patrol was scheduled for the following week.

The fox was seen again on Saturday, Oct. 5, this time on Pastors Walk around 10:21 a.m. A female resident reported seeing a sick red fox in her backyard, laying in the sun.

Risko said the description matched an animal in the later sages of mange. The fox fled back into the tree line and an officer was unable to find it.

Risko said there were no exposures and a species fact sheet and common cautions were provided to the resident, along with the information concerning cross contamination of  mange to domestic animals.

A periodic patrol was scheduled for the following week.

The animal was seen again on Monday, Oct. 7, when a female resident reported seeing a hairless red fox walking in the roadway on Guinea Road, approaching vehicles as drivers slowed at the intersection, around 3:50 p.m.

Officers searched the area for an hour, but again were unable to find the animal. A periodic patrol was scheduled for remainder of the week. 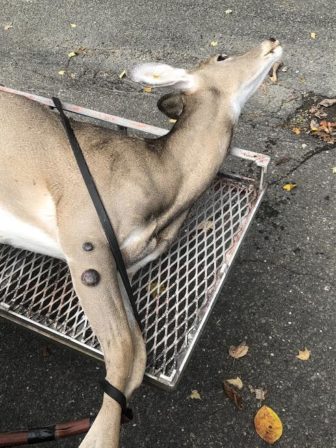 This deer, killed in a motor vehicle strike, had warts on its legs and chest. Contributed

A woman was driving on East Village Road when a deer ran in front of her vehicle and she was unable to avoid striking the animal Wednesday, Oct. 9.

An officer euthanized the injured deer at the scene and a state motor vehicle crash report form was completed, referencing the vehicle damages, along with DEEP Deer Kill Incident report form.

For information on how to avoid a deer collision, click here. According to the Humane Society, road design, road condition and driving speeds are the factors that most strongly influence the number of deer/vehicle collisions. Bumpier, narrower roads with twists and turns, and slower travel speeds (under 45 mph) result in fewer collisions with wildlife.

After the Oct. 9 crash, the animal’s remains were moved to wildlife feeding site.

Risko said the carcass had deer warts on the legs and chest. He said deer warts are viral based and contracted through an open wound or insect bite. The deer’s immune system reacts in what can sometimes result in large, grotesque growths that apparently have no adverse impact on the deer, according to the Quality Deer Management Association.

QDMA said bucks are often the most likely to develop the growths from battle wounds. Should the warts grow around the deer’s eyes, mouth or nose, they may begin to interfere with the animal’s ability to see and feed.

Raccoon in a trash container

A Fan Hill Road woman reported a raccoon inside her trash container on Thursday morning and an officer released the animal onsite without incident.

For recommendations on animal-proofing trash containers, click on this link.