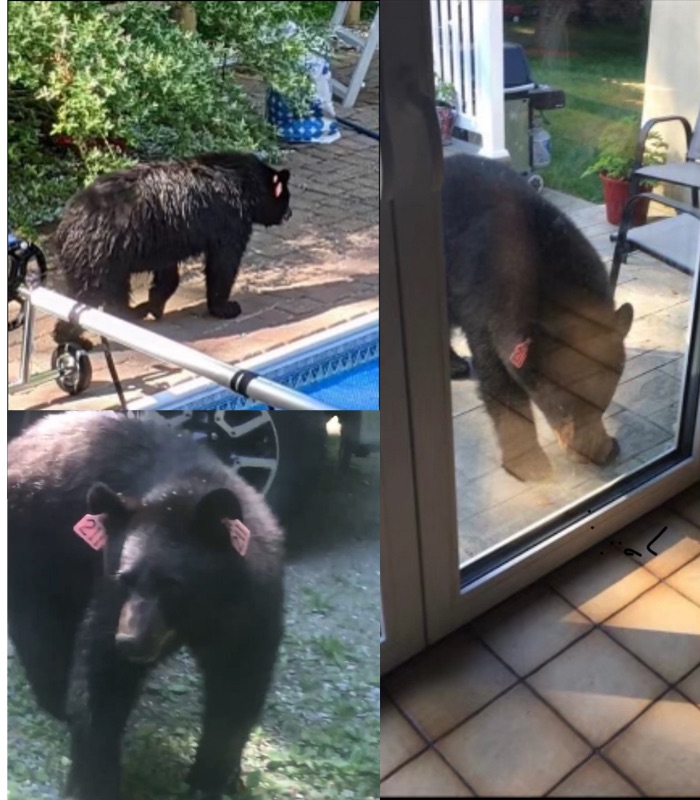 Homeowners often capture nice photos of bears. In Monroe, several people share their photos on the Monroe CT Residents Facebook page. Anna Kaczmarczyk took a picture of a bear at her sliding glass door, Paula Pavlik took one of a bear that went into her pool, and Melissa Swindon zoomed in for a closeup.

MONROE, CT — Black bear number 211, a one-and-a-half year old male who recently left his mother, has been seen climbing a tree in Waterbury, before walking through several towns, including Monroe, where he took a dip in the swimming pool of a home on Lois Circle.

“He’s used to humans and is interested in what they’re doing,” Risko said of the bear, which has tried to get into bird feeders and enter houses.

The bear showed up at the homeless encampment in Waterbury on May 12 and the Connecticut Department of Energy and Environmental Protection was called in to get it down from a tree in the Brass City on May 14.

The bear was tagged and released into the Naugatuck State Forest.

“But it didn’t stay there,” said Risko, who explained how bears have a home range of 15 to 30 square miles, depending on their age.

There were sightings in Seymour, Derby and Shelton. The bear was also seen on Daniels Farm Road in Trumbull on May 21.

Risko said the bear tried to get into a couple of houses in Trumbull.

Risko said the bear climbed a tree and dropped over a six-foot-high fence on Academy Lane. It checked out the pool, but there was no water. Then the bear went the back door, according to Risko.

The homeowner, Anna Kaczmarczyk, was watching the bear, when it noticed her and approached. Risko said she quickly closed her sliding glass door, took a picture of the animal and shared it on the Monroe CT Residents Facebook page.

Risko said if a bear grabs a paddle door handle and leans forward, the door will open if it’s unlocked.

On Lois Circle, Risko said the bear went under decking to get into the fenced in pool area, before taking a dip in the water. Paula Pavlik took a photo of the wet bear and shared it on Facebook.

Melissa Swindon took a nice closeup photo of the bear on Jeanette Street.

The bear was later seen in Trumbull, behind the high school on Daniels Farm Road on May 24 and on Great Neck Road on May 25.

If you encounter a bear

Stop: Never approach a bear at any time for any reason. If you see bear cubs, leave the area.

Give it space: Give any bear you encounter a way to escape. Step off the trail and slowly walk away. If a bear gets inside your home, prop all doors open, so it has escape routes.

Stay calm: Do not run or make sudden movements. Face the bear and slowly walk away.

Avoid eye contact: Don’t make eye contact with the bear, which it may perceive as a challenge.

Don’t run: It may encourage the bear to chase you.

If a bear attacks you

Fight back: In the unlikely event you are attacked, fight back, shout, be aggressive, use rocks, sticks and hands.

The bear may make a series of huffs, make popping jaw sounds by snapping its jaws and swat the ground. These are warning signs that you are too close. Slowly back away, avoid direct eye contact and do not run.

If a bear stands on its hind legs or moves closer, it may be trying to get a better view or detect scents in the air. It is usually not threatening behavior.

When hiking in bear country

Make noise: Making noise reduces the risk of surprising a bear. Some examples are speaking in an assertive voice, singing and clapping hands.

When living or camping in bear country

To scare a bear away, make loud noises by yelling, banging pots and pans or using an airhorn. Make yourself look as big as possible by waving your arms. If you are with someone else, stand close together with your arms raised over your head.