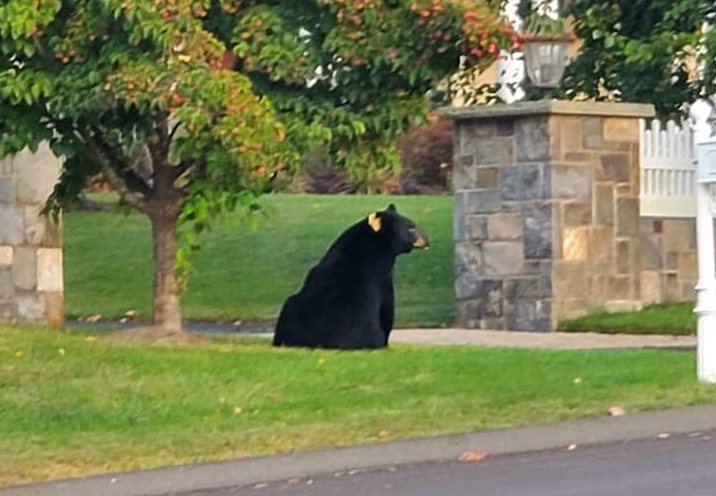 This black bear takes a break on Mustang Drive Monday amid a flurry of activity and sightings. Contributed

Then a woman reported seeing the bear on her property in the 200-block of Webb Circle at 2:57 p.m. Police said the animal entered her garage, took a bag of sunflower seeds outside, ate it and destroyed an old beehive.

At 5 p.m., a woman living in the 1200-block of Monroe Turnpike (Route 111) reported seeing the bear trying to get to the trash containers against her house. 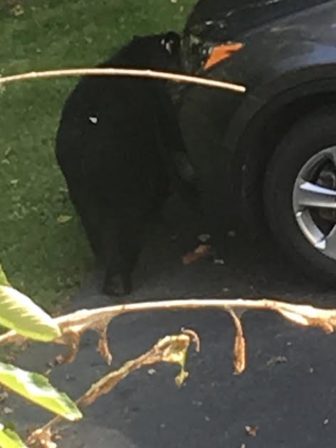 The black bear checks out a vehicle on Webb Circle. Contributed

Officers responded to the call and saw the bear crossing Route 111, heading west, back into the tree line.

Species fact sheets with common cautions were given to all the callers, according to Monroe Animal Control Officer Ed Risko. Site inspections were performed as officers looked for food attractants.

Sighting report forms were completed and forwarded to the Connecticut Department of Energy and Environmental Protection.

A Sandy Hook man headed north on Bagburn Road in his Subaru Outback Sept. 17 when a deer ran into the driver’s side door, causing damage and shattering the window, according to police.

Douglas Jones, 64, was evaluated by Monroe Volunteer Emergency Medical Service personnel for minor injuries, but refused a trip to a hospital, according to the report.

A wrecker towed the Subaru from the scene and an officer completed a state motor vehicle crash report and a state deer kill incident report form. The incident took place around 6:18 p.m.

The animal’s remains were removed and taken to a wildlife feeding site.

White Doves in the road

Police received two separate reports from residents seeing a pair of white doves sitting in the roadway on Far Horizon Drive on Sept. 12.

Monroe Animal Control Officer Ed Risko said one bird had a banded leg. He said an officer checked the area and could not find the birds, adding no match to missing pet reports was found.

For information on what to do when you find a lost dove, visit the National White Dove Release Society‘s website.

Residents have reported seeing bobcats all summer, and the sightings have not slowed as Monroe enters the fall.

“There will be more bobcat sightings this time of year as animals try to beef up for the winter,” said Animal Control Officer Ed Risko.

Among the recent sightings, a bobcat was seen on Hurd Avenue on Sept. 13, on William Henry Drive on Sept. 14, on Lovers Lane Sept. 17 and on Guinea Road on Sept. 18.

In every case, the Connecticut Department of Energy and Environmental Protection’s Bobcat Project report was updated.

The raccoon was last seen in the horse paddock, rolling under the fence and falling down a hill, while getting tangled in the undergrowth, according to the report.

An officer searched for the animal, but it could not be found. Risko said there were no exposures and no testing was required, adding the property owner’s dogs and horse are validly vaccinated and licensed.

However, a rabies advisory was issued, recommending veterinary consult, booster rabies vaccinations and a 45 day observation.

On Sept. 16, a woman driving on Cutlers Farm Road around noon reported seeing a raccoon stumbling across the roadway. The animal was last seen heading east toward the tree line.

An officer searched the area, but could not find the animal. A periodic patrol of the area was conducted throughout the day without success, according to the report.

One thought on “Black bear enters garage, eats sunflower seeds, berries, tries to get into trash”