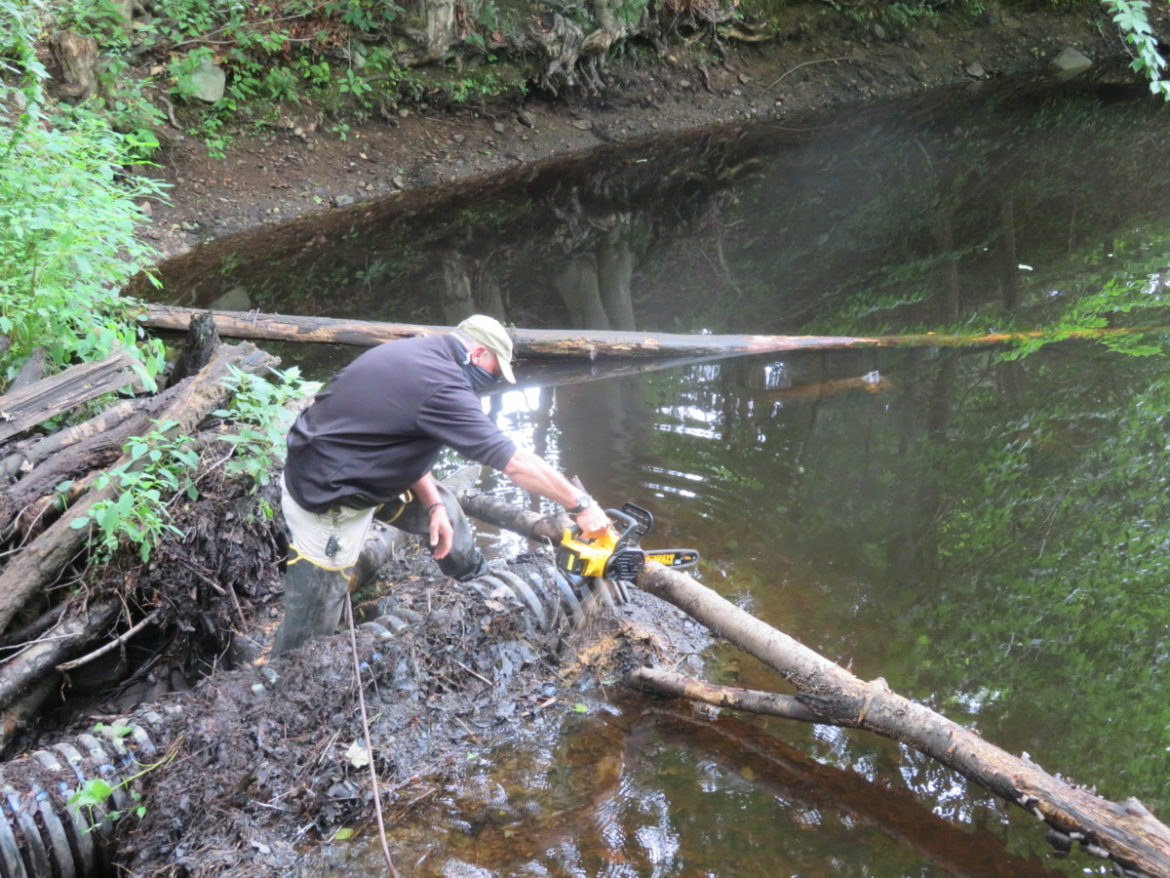 Monroe Animal Control Officer Ed Risko uses a chainsaw to cut a log on top of a pipe on Guskie Pond.

MONROE, CT — Animal Control Officer Ed Risko carried a chainsaw, while wading into the water of Guskie Pond Thursday morning. A large pipe, which had allowed water to flow through a dam of sticks and mud, had been moved away by beavers, causing flooding in the surrounding neighborhood. Risko dug away debris and cut a log atop the pipe, freeing it, so it could be moved back into place.

This was the secondary dam. Beyond it, the pond widened. Further from the spot, a little ways passed an area of lily pads, larger piles of sticks cutting across the pond formed the main dam.

Risko said beavers build dams to control the water level around their lodge, allowing the small mammals to swim out to trees for the green bark, beavers’ main food source, while providing protection, because walking can be more treacherous.

A beaver’s webbed feet can make for a slow go on land. “Like a scuba diver, they paddle-walk,” Risko said.

The ability to move swiftly through the water makes beavers a more difficult target for predators like coyotes, bobcats and bears.

Beavers give birth to one-to-four kits at a time. Once a kit is two-years-old, it moves downstream to start its own colony. Beavers moved into Monroe in 1992, building their first dam at Hattertown and Judd roads, according to Risko.

Since then, Risko has been placing vent pipes, which are called water level control devices, in beaver dams throughout town to alleviate property damage from flooding.

“The only way the state allows us to control beavers is to control the water level,” he explained.

A history of problems

Risko has been called back to Guskie Pond, located along Huntingtown Road, several times over the years. Beavers first moved there in 1994.

Aside from causing tree and flood damage for area residents, beavers caused a section of Huntingtown Road to collapse, a little over a decade ago, when they built a lodge beneath the street. 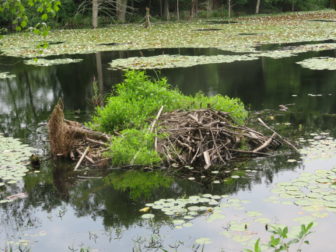 A beaver lodge on Guskie Pond.

A beaver lodge is a conical shaped dwelling, made from sticks, mud and rocks and surrounded by water.

In 2011, Masuk student Matthew Morabito, a Boy Scout with Troop 163, worked with Risko to come up with a design to get water flowing through the main dam for his Eagle Scout Project. It involved the installation of five pipes.

It solved flooding problems for a while, but it has become a problem once again.

During an Inland Wetlands Commission meeting last week, Denise Halstead, the town’s wetlands agent, said septic systems were being compromised by flooding around the pond.

Inland Wetlands had approved Risko’s plan to lower the water level around Guskie Pond for this year’s project, which started last Monday. Risko said he has to limit the amount of work he does each day to avoid releasing water too quickly and causing flooding downstream.

Once Risko places the pipe at the secondary dam back into place, he will rebuild the dam around it. Then the beavers can build against it.

When the project is done, the beavers and neighbors can coexist for a while, until it’s time to lower the level of the pond again.

After completing the project at Guskie Pond, Risko plans to do similar work at other sites, including Stanley Road at Hayes Street, Rails to Trails near Newtown, and Garder Road.

One thought on “Beavers cause flooding around Guskie Pond”