Residents reported several black bear sightings this summer, the latest of a sow 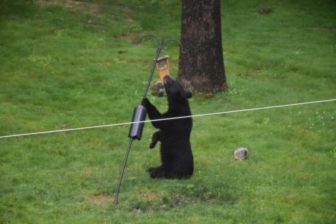 A black bear gets into bird feeders in a yard on Applegate Lane. Contributed

with her two cubs, who were seen playing and destroying two plastic balls at a house on Summit Drive on the afternoon of Friday, July 5.

“This is most likely the sow from last week, which caused the state to close a park in Redding,” Animal Control Officer Ed Risko said of Topstone Park. “A bear warning is in effect due to a black bear sow with cubs frequenting the area.”

A sow with her cubs in a yard on Summit Drive. Contributed

Summit Drive for this story.

Those bears were working the Hattertown/Guinea road area with sightings reported at 7:30 a.m. and 2 p.m. on July 5, according to Risko.

“There continue to be reports of bears in and around residential areas,” he said. “Remember to keep your yard free of wildlife attractants such as garbage, recycling, bird feeders, pet food, fruit bearing trees and shrubs. A fed bear is a dead bear. Do not feed them.”

Risko said there have been several other bear sightings

in Monroe this summer.

On Thursday evening, a bear was photographed on Old Zoar Road. 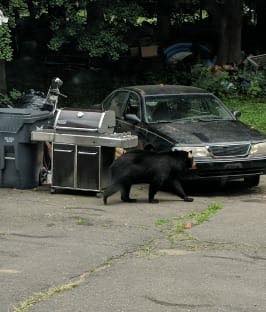 On July 5, a male motorist from Shelton reported seeing a bear cross the roadway in the 200-block of Hattertown Road. He guessed that it weighed 200 pounds and told police it was heading toward Newtown.

On June 29, a Turkey Roost Road woman reported seeing a black bear in her yard at 7:47 a.m. Risko said the bear came from the Hammertown Road area and was heading toward Fan Hill Road.

At 8:26 a.m., another woman reported seeing a bear crossing Lorraine Drive at Fan Hill Road and a man later said he saw a bear on Chalk Hill Road, coming from the school area on its way toward the swamp on Jockey Hollow Road, Risko said, adding he believes it is the same bear first seen 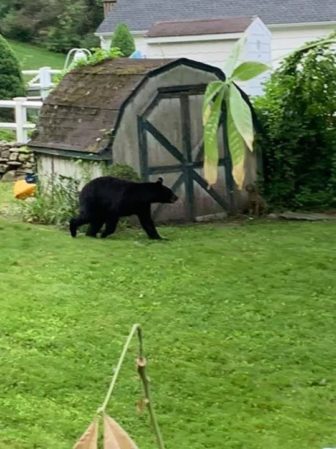 A black bear wanders around a yard on Turkey Roost Road. Contributed

“The bear followed the same path of travel from May 22 and June 19, indicating this is the same bear making his home range circle,” Risko said.

He said there were two more sightings after 8:31 a.m. and an officer patrolled the area and streets of the bear’s projected travel without incident.

Risko said all callers were given common cautions and fact sheets on black bears and Monroe Animal Control forwarded sighting activity reports to the Connecticut Department of Energy and Environmental Protection.