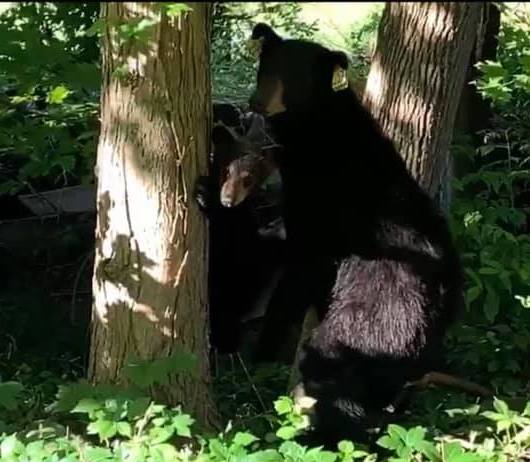 This black bear sow and cub were seen behind a tree on Webb Circle Saturday. The photo was shared on the Monroe, CT Residents Facebook page. 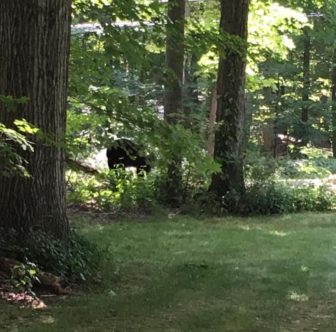 Mike Sengstock took this photo of a black bear in his yard on Josies Ring Road by Route 111 this week.

Animal Control Officer Ed Risko says two dogs were barking at a black bear that had climbed a tree in a yard on Stanley Road Wednesday night.

Two sisters grabbed flashlights and went outside to see what got their pets so riled up. One dog was inside the house, looking out a window, while the other was outside, looking up at a tree.

The young women heard branches crashing as an animal climbed higher. Then they heard something falling and land with a thud.

Then Risko said the sisters heard an animal running toward the tree line.

A man mowing his lawn on Forest Road on the afternoon of July 12 told police he heard what sounded like a bull snorting or grunting.

Risko said the resident stopped cutting the grass and moved to his deck, so he could try to identify the source of the noise.

An officer performed a site inspection, finding evidence of a black bear at a stream to the rear of the property.

Of the grunting, Risko said, “that would be a warning sign of a bear getting too close.”

A Lake Zoar Road woman reported seeing a black bear with two cubs walking on her driveway at 3:25 p.m. on Thursday, July 11, before entering her garage and looking around.

In all cases of reported bear sightings, Monroe Animal Control completes a sighting report form for the Connecticut Department of Energy and Environmental Protection and gives the resident common cautions and fact sheets on black bears.

One thought on “Bears rummaging through trash, falling out of trees”