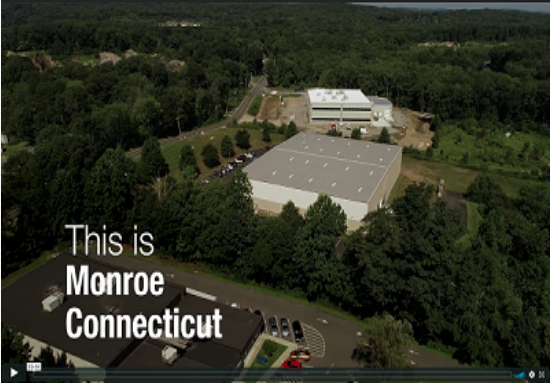 "This is Monroe Connecticut" is a promotional video on the town website.

MONROE, CT — Videos posted online and plugs on the big screen during movie nights at Wolfe Park were among the options discussed for the promotion of Monroe businesses, during an Economic Development Commission meeting Thursday night.

The town does have a promotional video, produced in 2018, on it website, though it’s not as visible as it could be. EDC members want to create lively content that reaches a wider audience.

“That video, they’ve spent all this money. It was just sent out once and that was that,” Herman Olivera III, a commissioner, said of the 2018 video. “There was another one that was produced. I actually have the dvd somewhere. What a waste of money. Why produce this, if we’re not going to market it?”

Chairman Ray Giovanni said virtual videos could be an alternative to welcome new businesses to town when the COVID-19 pandemic prevents officials from arranging a live ribbon cutting ceremony. He said it could feature footage of the shelves and owners telling viewers about their business.

“We could take a grassroots, organic approach,” Olivera said. “Listen, the word in Monroe travels fast. We don’t have to go in with a big time camera crew or audio crew. Simple videos will do it. But we need a central platform to share it off of.”

“We can have businesses do, like a quick 60 second clip,” said James Goldstein, a commissioner.

Aside from sharing videos online, William Holsworth, the town’s community and economic recovery coordinator, suggested video spots on movie nights, if the Monroe Parks and Recreation Department is able to host those events.

The discussion was sparked by Commissioner Lawren Hubal, who did a study comparing the Monroe EDC to commissions in Trumbull and Newtown.

When Holsworth mentioned Monroe’s promotional video, Hubal said she could not find it on the town website.

“Lawren’s point is great. We have a video, but I don’t know how to get to it,” said Mary Hall, a commissioner. “How would a business thinking of moving into the community know it is there and where to go?”

Hubal recommended improving content on the town’s website. For example, she said it does not tell visitors much about the town, beyond the fact that it’s named after the fifth U.S. president.

She asked if there was a calendar of weekly events. Holsworth said he has seen links for events like Monroe Restaurant Week displayed on the blue bar on the right hand side of the website, but does not know of any one master calendar.

Olivera said the website is proprietary and challenging to update on the backend.

Holsworth said the Monroe Parks and Recreation Department has a calendar on its website and email pushes are another way to promote events.

Olivera said he is on the Connecticut Board of Tourism, which is “starving” for events to promote on its calendar. He encourages local businesses to give him information on every promotion or event, so he can arrange for free promotion.

He said Light up Monroe, the fundraising event featuring home displays of Christmas lights and decorations to support the new playground project at Wolfe Park was highlighted on the calendar, leading to a mention in Connecticut Magazine.

Commissioners discussed the need to be more active on social media, while assisting local business owners who are not as tech savvy.

“I think we need young blood on social media all the time, getting out to businesses,” said Christine Wittenauer, a commissioner. “I always recruit my young ones. They love the marketing.”

She said young people know how to hashtag, how to promote and what looks good.

Giovanni said he tries to tap teachers to find student volunteers who want work experience, but teachers are hesitant because they have an obligation to supervise their students.

Holsworth said he’ll reach out to Superintendent of Schools Joseph Kobza to see if there are students interested in marketing, business, finance and real world experience.

He suggested offering an incentive program to reward students who produce the most. Volunteering would be a good experience and a way for students to enhance their resumes, Giovanni added.

While many people are on social media, Hall asked how the EDC can reach older residents who are not on Facebook and don’t have email.

“The library is phenomenal,” Olivera said. “On the cork board there’s always something going on.”

Giovanni said the Monroe Senior Center is the only place to reach them, other than Edith Wheeler Memorial Library, though not as many residents are going to the center because of the pandemic.

“That group is more isolated, because they are not on social media and there are no newspapers,” he said of town print publications.

Giovanni said some probably listen to WICC radio. Other than that, he said one would have to do door-to-door.

Hall asked if they could have something like the emergency call number First Selectman Ken Kellogg uses to get messages out to residents by phone. But Wittenauer, who has worked in the First Selectman’s Office, said she does not know if Kellogg would want to do that.