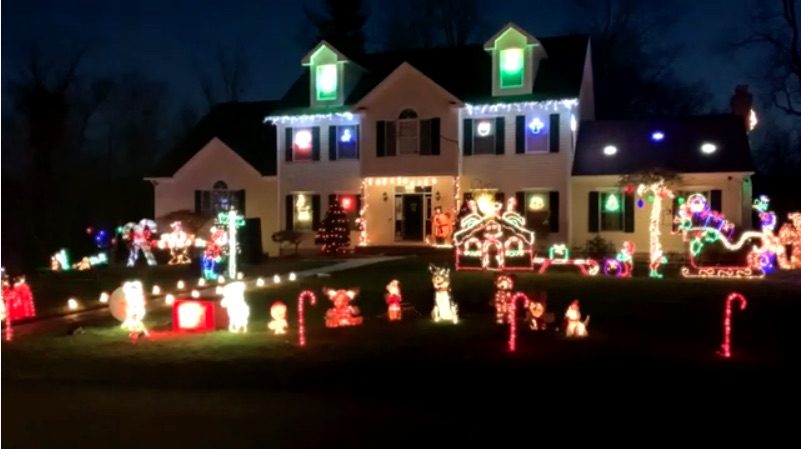 The Sebben family won the People's Choice Award for the holiday display at their home at 36 Admiral Drive.

MONROE, CT — Families throughout the state toured Monroe to marvel at the Christmas decorations in brilliant holiday displays at 46 homes for the Light up Monroe contest, which the Connecticut Office of Tourism included among its listing of things to do in Connecticut.

The contest, sponsored by the Monroe Playground Foundation, raised nearly $3,000 for the Wolfe’s Den Playground project at Wolfe Park, bringing the foundation to about one third of its goal of $400,000, according to Chairman Dan Keene.

To donate or to buy a component for the playground, visit the foundation website.

The contest winners were announced during “The Monroe Holiday Spectacular,” a show aired on YouTube, with the link posted on the Light up Monroe Facebook page on Dec. 23.

The new playground, which will have a community build, will replace the wooden Kids Kreation Playground.

“The old playground was wonderful, but after 25 years, its time has come,” Keene said in the video. “Our vision is a new playground that’s as wonderful as our town, a play-space where all children of Monroe are able to play side-by-side, where you can roll a wheelchair onto the playground as easily as you can run to it.”

First Selectman Ken Kellogg and Michael Ganino, treasurer of the Monroe Playground Foundation, made appearances on the show, which was hosted by Frosty’s cousin, Snowy the Snowman in Monroe’s North Pole.

The show also featured music by the Masuk High School Choir and Band, interviews with families talking about their winning displays, and video clips from the Menorah lighting for Chanukah, held on the green near Monroe Town Hall.

Winners in the categories decided by a panel of 25 judges were:

Best Use of Animation: The Katz family, 92 Purdy Hill Road