On Sept. 24, a Bart Road woman reported finding animal scat in her yard almost every morning. An officer identified the scat as belonging to a red fox, but a camera would make it a positive I.D.

“When an animal walks past the camera, it triggers the sensor, which then tells the camera to take a photo or a video,” Animal Control Officer Ed Risko said. “The cameras are usually battery operated and can monitor wildlife remotely.” 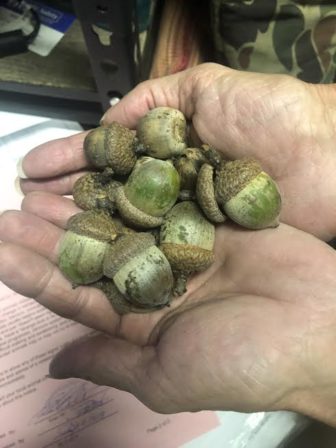 Injured squirrels being nursed back to health this winter will need a healthy supply of acorns to get by.

“We are collecting acorns with caps for our squirrels in rehab,” said Animal Control Officer Ed Risko.

Donations may be brought to the Monroe Animal Shelter, 447 Purdy Hill Road.

According to The Wildlife Center of Virginia, quality acorn donations should be cleaned and bagged.

NOTE: Acorn quality quickly deteriorates, molds and rots if collected and left in buckets/bags where they get wet or hot.

A Hillside Lane woman called police asking for help after her six-month-old cat climbed a tree on Sept. 26.

Animal Control Officer Ed Risko said tips were provided on what to do when your cat climbs a tree. Among them, if the cat remains up there for seven days, a referral can be made to hire commercial tree service/climber, who has the proper equipment and training and is licensed and insured.

Bat in the bedroom

A Wheeler Road woman was sleeping Sept. 22, when she awoke to a bat in her room.

An officer captured and removed the bat. Due to the reported exposure, Animal Control Officer Ed Risko said the bat was euthanized and brought to a state lab for rabies testing, adding the results were negative.

Species fact sheets with common cautions and exclusion tips were provided to the resident.

An officer searched the area and was unable to locate the animal. A species fact sheet with common cautions concerning mange, and the possible cross contamination to domestic pets, was given to residents.

A scruffy, thin appearance usually indicates that the fox has Sarcoptic mange. Sarcoptic mange is the name for the skin disease caused by infection with the Sarcoptes scabei mite. The mites are microscopic and can’t be seen by the naked eye, according to the Jan 5, 2017 article “Treating Sarcoptic Mange in Red foxes,” on the Fox Wood Wildlife Rescue website.

Prevention begins with keeping your pets away from infected animals and treatment is simple, according to the website, which says mange is caused by mites that burrow into an animal’s skin to reproduce.

A doctor’s office reported treating a 12-year-old boy from Patmar Circle for a dog bite around 4 p.m. Saturday, Sept. 21.

Police said the dog was being walked on a leash by its owner when it saw the boy playing on his neighbor’s property, broke from its lead and attacked him, injuring the boy’s left calf.

The dog is validly vaccinated and licensed, according to Animal Control Officer Ed Risko, who said the pet had no reports of aggressive or roaming behavior.

An infraction was issued to the dog’s owner for first-degree creating a nuisance and a dog bite, which carries a $75 fine. The owner was also given a written warning for a roaming dog.

The dog had to be quarantined for 10 days, according to state law, and to be examined by a veterinarian to assess the animal’s health three days prior to release.

A crow with West Nile

A woman driving on Richards Drive Sept. 20 reported seeing an adult crow in distress fall out of a tree and into the roadway.

An officer found and removed the bird for an assessment. Animal Control Officer Ed Risko said it was showing symptoms of the end stage of West Nile Virus, adding the bird was euthanized. 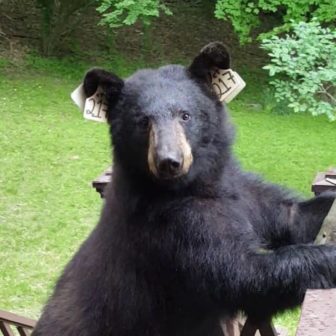 This bear is a frequent visitor to Monroe. Contributed

Black bear sightings were reported on Whispering Pine Road on Oct. 2., and at a house on Old Zoar Road on Oct. 1.

Animal Control Officer Ed Risko said a site inspection was made of the yard on Old Zoar Road and no food attractants were found.

In each case, an activity report form was completed, a Connecticut Department of Energy and Environmental Protection sighting report was entered into its website and the callers were given species fact sheets with common cautions and hazing tips.

In each case, sighting report forms were completed and species fact sheets were provided with common cautions. Site inspections were performed and no attractants were found.

The Connecticut Department of Energy and Environmental Protection’s bobcat project report was updated.