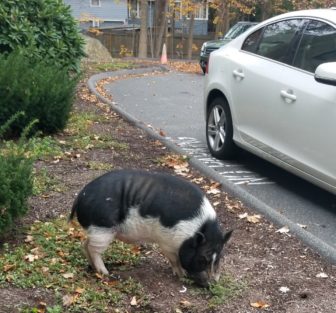 This potbellied pig escaped from its pen and wandered off to a neighboring property. Contributed

Someone at a commercial property at 578 Pepper St. reported a strange visitor at the front door Oct. 22: a neighbor’s potbellied pig.

Animal Control Officer Ed Risko said the pig had escaped from its enclosure and taken a walk next-door.

The owner was given an advisory notice and recovered the pig without incident and the fenced enclosure was repaired. No violations were found.

Animal Control Officer Ed Risko said the owner fears the pets may have been taken by an animal predator, because of the uncovered enclosure the ducks were kept in and the two-day time span between the losses.

A missing pet report form was completed and search tips were provided.

A man driving south on Monroe Turnpike on Monday night, Oct. 21, struck a deer that ran into the road near Historic Drive.

Police said the man turned around and drove back to the scene after reporting the accident and found neighboring residents had come out to stop traffic, while the deer was laying down in the street.

The animal appeared stunned, recovered, and walked off the roadway back into the tree line, heading west towards Fan Hill Road, according to police.

The man’s vehicle was damaged on the driver’s side, front fender and driver side, rear passenger door. No report was filed.

Animal Control Officer Ed Risko said an officer searched the immediate area and was unable to find the deer.

On Oct. 18, a Lazy Brook Road woman called to report seeing a small raccoon walking around during the early morning hours. The raccoon looked sick, smaller than normal for this time of year, and was unsteady on its legs.

The animal walked into thick underbrush and the officer was unable to see it to make an evaluation. A periodic patrol was conducted throughout the day, but officers could not find the raccoon.

She also reported seeing the raccoon on Oct. 19, but an officer could not find it then either. Over the next six days there were no additional reports, according to Animal Control Officer Ed Risko.

On Oct. 19, a Blue Hills Road resident reported seeing a sick or injured raccoon in the driveway. An officer euthanized the animal.

There were no exposures and no testing for rabies was required. The animal’s remains were removed for cremation.

A red fox with mange 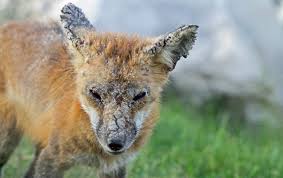 This red fox has mange. Contributed

A police officer reported seeing a sick red fox near Chalk Hill School on Fan Hill Road, that appeared to have mange, laying out and sunning itself for a little relief on Friday morning, Oct. 18.

When the officer approached to evaluate the animal, it fled back into the tree line. Officers conducted a periodic patrol throughout the day with negative results.

Mange is a skin disease caused by parasitic mites.