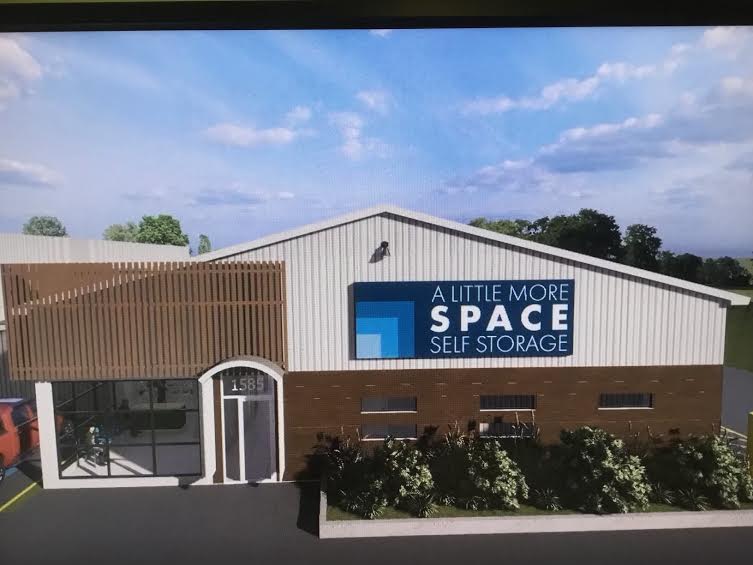 This is a computer rendering of one of the buildings for the A Little More Space self-storage facility that will be build on the former Stevenson Lumber property.

MONROE, CT — A self-storage facility is the third business that will open on the old Stevenson Lumber property on Monroe Turnpike. Planning and Zoning commissioners unanimously approved a special exception permit last week.

John Kimball said it is the first A Little More Space Self Storage facility of many they plan to build.

“We’re very excited,” he told the commission Thursday. “The family is very excited to own and operate this facility by next year. We will be fixing the guardrail and already removed the penitentiary-looking fencing from the site. We want to invest in Monroe. We want to build more of these and make this a showcase.”

The applicant for the special exception permit application was Stevenson Properties LLC: By Kimball Investments LLC. Thursday’s hearing was continued from Nov. 4.

“I think it’s a great proposal,” Chairman Michael O’Reilly said before the vote. “I think they met all the requirements and I’m inclined to approve it.”

Ryan Condon, the commission secretary, said he thinks there is a need for self-storage facilities in the area. “I think they’re making the front look nice,” he added of the property.

The facility will be built on Parcel 1 of the site at 1585 Monroe Turnpike. It will be the third business to open there, continuing the town and the Kimballs’ efforts to revitalize the former Stevenson Lumber property.

Zwally Hauling, LLC, which provides tri-axle dump trucks to transport construction materials to job sites decided to come to Monroe from Bridgeport, and Galbo Provisions Inc., a distributor for Boar’s Head, is moving its headquarters from Fairfield to the Monroe site.

Robert Westlund, a commissioner, and Nicole Lupo, an alternate, both agreed there is demand for self-storage and said they liked the low impact on the environment with low traffic to be generated from the activity.

Kimball said the roofs of the buildings could be equipped with solar panels one day and there could be an agreement with the school system to lock in electricity rates for Monroe’s schools, though he said there is no immediate need for solar on the buildings.

Condon said he liked that idea.

On Thursday night, Kimball made a presentation with Jason Edwards of J. Edwards Associates, an Easton engineering firm.

The applicant will remove a front portion of the existing building — a former windows and door manufacturing warehouse — and upgrade the front facade.

“We’re cutting the front of the building about 40 feet to give the trucks more room to go around it,” Kimball said.

He said the front of the building, which is 32,000 square feet, will be glass paneling and an architectural detail will be added at the top of the building. The facility will have a row of insulated garage doors, giving exterior access to the climate controlled storage areas.

Though the five new buildings, which total nearly 16,000 square feet, will not be climate controlled, Kimball said the roofs will be insulated.

The property is close to 4.5 acres and is located on the westerly side of Monroe Turnpike. The business will have a total of 18 parking spaces.

Town Planner Rick Schultz said the site will be served by public water and the nearest house to the facility will not be visually impacted because of a significant difference in elevation.

“This site is difficult to provide septic for,” Kimball said. “That’s why it’s a self storage use.”

The buildings will be fully sprinklered and the lighting will be Dark Sky compliant. Kimball agreed to add more landscaping to the southern part of the buildings and to have more native species.

The facility will have motion sensors and there will be a manager someone can call whenever there is a problem.

Kimball assured the commission that all self-storage regulations will be followed on what things people can and cannot store at the facility. For example, no hazardous materials, explosives, paint, fruit or vegetables may be stored.

Customers must declare their contents when applying for their insurance policy and a camera will show what’s coming and going, according to Kimball.

“Technology has come a long way with the motion and heat sensors,” he said. “We can tell how many freckles someone has on their face when they come and go from the facility.”

There will be no outside storage nor any storage of commercial vehicles on the site.

During the public comment portion of the hearing, Barbara Thomas, who serves as secretary of the Conservation Commission in town, noted the landscaping plan included only six percent native species.

Kimball said native plantings are not always appropriate for a site. For example, he said ash and white pines are native trees, but terrible for screening. However, he said, “it’s a good goal to have native plants where possible.”

The commission asked the applicant to add more native plantings.

“We’re not resistant to doing it anywhere where appropriate,” Kimball said. “We think it’s a good goal and would work with the Conservation Commission.”