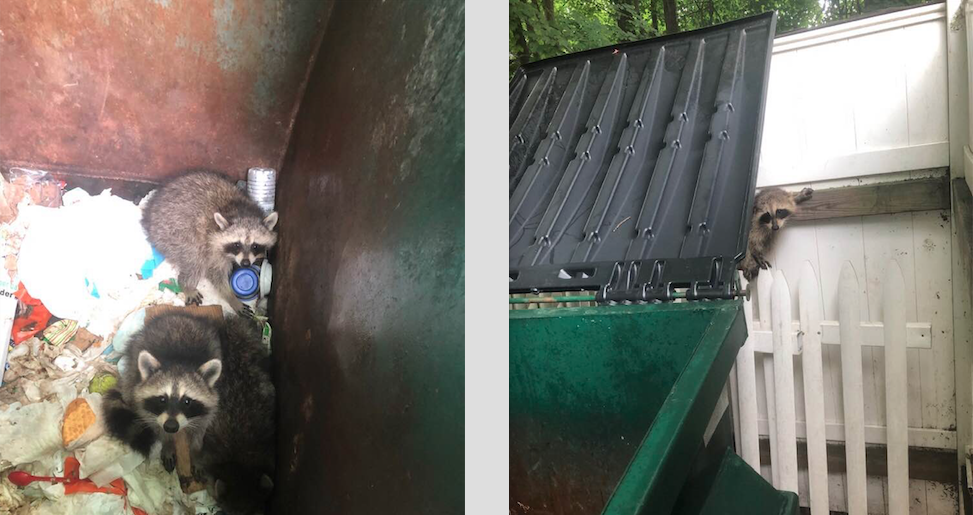 Baby raccoons got stuck inside this Dumpster on Shelton Road Tuesday. Contributed

A police officer provided a ladder to help three baby raccoons climb out of a Dumpster on Shelton Road Tuesday morning after a female caller reported the animals had gotten stuck.

In a separate incident reported on Thursday, a squirrel became trapped inside a trash container outside Jockey Hollow School on Fan Hill Road.

Animal Control Officer Ed Risko said the squirrel was removed without incident and released on the property.

In both cases, animal exclusion tips were provided to secure the trash containers and prevent animals from entering.

Too hot in the hot tub

A Greenwood Lane woman reported a yellow jacket nest inside the wall of her hot tub Aug. 1.

Monroe Animal Control provided a list of common cautions with “how to” instructions to spray a nest, along with a referral to hire a commercial pest control service.

A man reported seeing a raccoon acting drunk in the Rails to Trails parking lot Wednesday morning, hiding under cars and falling over.

Officers searched the area and were unable to locate the animal, until the caller returned to the scene and directed them to the animal’s last known location.

The officers found the raccoon, which displayed symptoms of rabies. The animal was euthanized and its remains were removed for cremation.

There were no exposures and no testing was required, according to Animal Control Officer Ed Risko.

Coming home to a dead bat

A Lynn Drive woman reported coming home from vacation to find a dead bat inside her house Thursday.

Animal Control Officer Ed Risko said there was no exposure to the bat and no testing was required. The remains were removed for cremation.

Species fact sheets with common cautions were provided to the homeowner, along with exclusion tips.

A 27-year-old Honeyspot Pizza employee reported being bit by a dog, while making a delivery on Secret Hollow Road around 5:20 p.m. Monday.

Police said a beagle-bulldog mix pushed past the door, ran into the front yard and bit the man, causing a minor physical injury. The dog’s keeper regained control of the pet and the deliveryman returned to the restaurant, where he reported the attack to his manager and the police department.

Animal Control Officer Ed Risko said the dog was unlicensed, but validly vaccinated for rabies and there were no previous reports involving the animal.

A $75 fine was issued for creating a nuisance (the dog bite), along with a written warning for failure to license a dog. The dog was to be quarantined to its owner’s property for 10 days, according to state law.

A deer with an unknown skin condition and a disease that was eating away at the flesh of its face was found and euthanized after a caller reported seeing the animal in his neighbor’s yard on Lorraine Drive Wednesday.

Risko said officers immediately recognized the deer, which they had been tracking since June.

The animal’s remains were submitted to the Connecticut Department of Energy and Environmental Protection for examination and forwarded to UConn Labs for a necropsy.

A bobcat was seen in a yard on Swendsen Drive Thursday afternoon and another sighting was reported on West Maiden Lane on Aug. 3.

A female driver reported seeing a fawn struck and injured by another motor vehicle on West Maiden Lane Tuesday morning.

The fawn, which appeared to have a hind leg fracture, ran into the
tree line and the woman was able to follow it until the animal went down in the brush, according to the report.

She returned to her vehicle and reported the incident, but when officers searched the area they were unable to locate the deer.

No one reported hitting the animal, according to Risko, who said periodic patrols of the area were conducted throughout the day with negative results.