A resident snapped this photo of a bobcat running through his yard, then across the street on Autumn Drive. The photo was posted on the Monroe CT Residents Facebook page.

A bobcat with a tracking collar and ear tags was seen on Autumn Drive and Crescent Place on July 27.

A woman on High Meadow Drive reported seeing the same bobcat on July 30.

A different bobcat was seen on Monroe Turnpike around 1:30 p.m. on July 30. Animal Control Officer Ed Risko said that cat has been walking in a range from Main Street to West Maiden Lane this summer.

A Route 111 woman reported seeing the bobcat in her yard, watching her caged ducks on July 22 and told Animal Control one of her ducks was missing.

In every case, Risko said a fact sheet with cautions for dealing with bobcats was provided and the Connecticut Department of Energy and Environmental Protection’s project studying bobcats was updated.

Woodchuck in a garage

A woodchuck living under a woman’s porch somehow got trapped inside the garage of her Wheeler Road home while she was away for the weekend, causing damage to the doors and sheetrock walls as it tried to escape.

Animal Control Officer Ed Risko said fact sheets on woodchucks and exclusion tips were provided, along with a referral to hire a nuisance wildlife control operator if so desired.

A rabbit in a pool 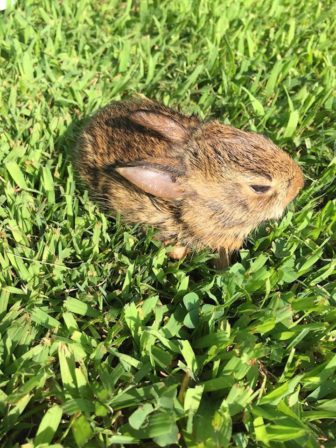 This baby rabbit was rescued from a swimming pool on Sweetbrier Lane.

A woman on Sweetbrier Lane reported rescuing an immature rabbit that had fallen into her swimming pool July 25. She left it on her lawn to dry, but the animal just sat there.

Animal Control Officer Ed Risko said an officer took the rabbit to a veterinarian and it is now rehabilitating with a woman in Shelton who specializes in helping wild rabbits.

A man who found four raccoons stuck inside a Dumpster on Main Street, near the Trumbull town line, on July 30, used a board to give them an escape route.

Three used it immediately, but the fourth didn’t move and was just shaking.

Animal Control Officer Ed Risko said an officer later checked the Dumpster and could not find the animal, which was believed to have used the board to exit once the perceived threat (the human) moved out of sight.

A 49-year-old man told police he was jogging on Aspen Lane on July 24 when a dog ran into the roadway and bit him on the right leg.

The pet’s owner said there was an electric fence failure. The dog was licensed and vaccinated, according to Animal Control Officer Ed Risko.

The owner had two prior warnings in 2017, so a $75 nuisance fine was issued, along with written warnings for annoyance by dog in roadway and roaming dog.

An on-property quarantine order was issued and the case remained open pending a veterinary health examination.

Risko said the man who was bit had an injury, but declined immediate medical attention.

A Monroe man reported seeing a cross fox running across the roadway on Webb Circle July 29.

The cross fox is a partially melanistic color variant of the red fox, which has a long dark stripe running down its back, intersecting another stripe, according to Animal Control Officer Ed Risko.

Risko said cross foxes are rare. The Monroe cross fox was black with a white tipped tail, according to the report.