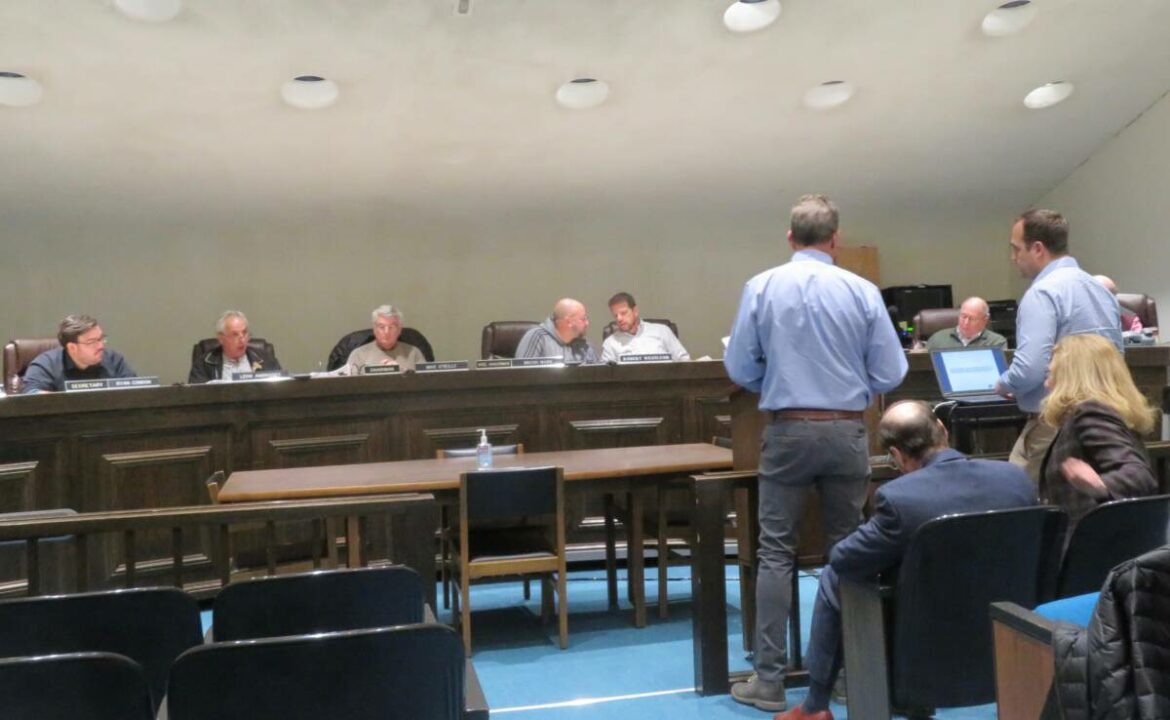 Kevin Solli, founder and principal engineer of Solli Engineering, standing in front of the laptop, answers Planning and Zoning commissioners' questions at a hearing Thursday.

MONROE. CT — Arnold Karp told the Planning and Zoning Commission he did his due diligence before buying industrial properties at 64 Cambridge and 4 Independence drives in May of 2019, while representing two LLCs, adding extensive environmental testing has been done.

“The point is, we would have found it by now,” Karp said of any contaminants in the soil. “I think we’ve done a very good job with what’s under the hood.”

The previous owner, New England Materials LLC, whose principal was John Kimball, had approvals for two industrial buildings. But it turned into an un-permitted quarry and an enormous hole was left on the site, which has since filled with water.

A large amount of fill was brought in over the years, and some commissioners are concerned over whether it contained any contaminants that could pollute the water table, which is in a GAA, public water supply watershed.

“And we brought in an excavator to go through those piles,” Karp said during a Planning and Zoning Commission hearing for an excavation/filling permit Thursday.

The Inland Wetlands Commission approved a remediation plan to restore wetlands destroyed by the previous activity on the site. It includes filling the giant hole, which Karp estimates will take at least five years, because of the time needed to find clean fill.

Since Astro Land Holdings and Spacely Land Holdings, the two limited liability companies, took ownership of the properties, Solli said a process has been in place to ensure only clean fill is brought to the site.

Fill materials are tested offsite and then tested again onsite with accepted materials accounted for in a manifest.

The Connecticut Department of Energy and Environmental Protection, which is investigating the site, asked for information on fill from two questionable locations.

Attorney Jane Warren, who is Kimball’s sister, represents the applicant. She said the fill was the equivalent of 300 truckloads and all but seven loads were rejected, because testing did not meet their standards for it to come to the Monroe site.

In a letter on Dec. 15, Jepsen, an environmental analyst for the DEEP, said he visited Rockhead LLC, Karp’s company, at 64 Cambridge Drive in response to a complaint and was accompanied by Monroe Police Det. Michael Chaves.

“We toured the site. There was no visible evidence of any solid waste on the site,” Jepsen wrote. “We then met with Arnold Karp, Owner of Rockhead, LLC and John Kimball, former owner and current consultant.”

Jepsen said they told him the site had been shutdown since September 16, 2020, but began to take in “clean fill” since mid-June of 2021. They discussed what materials were used as fill and Jepsen was directed to send any followup questions to Warren, which he did.

Peter Metropoulos, who owns 36 Timothy Hill Road, a neighboring property, has expressed concerns over the environmental impact of earthwork on the Cambridge and Independence drive sites in Pepper Street Business Park, particularly on the groundwater.

He filed for intervenor status for all of Karp’s applications before wetlands and zoning, giving him the right to have his own experts to present evidence and ask questions.

Metropoulos filed a lawsuit appealing the Inland Wetlands Commission’s approval of the remediation plan for the site.

On Thursday, Metropoulos’s attorney, Joel Z. Green, made a presentation, summing up a report from their licensed environmental professional, Evan Glass.

Glass referred to the time before Karp owned the properties as the “Kimball era” and noted there has been much more frequent testing of fill brought there during the “Karp era.”

He also said he believes results from testing during the Kimball era was still not given to the DEEP. Warren said she believes New England Materials is gathering that data for Rockhead.

Though monitoring wells on the site have not shown a negative impact on groundwater, Glass said the wells are “very far away from the fill.”

“Usually there are not two wells, but many, many wells on a property of this size,” Glass said of the two parcels which combine for over 70 acres.

Glass said he believes questionable fill has been brought onto the site and said there should be a higher frequency of testing.

“I believe the applicant’s intention is not to bring in polluted fill,” Glass said. “It’s already on the site from past and previous owners.”

He recommended that the commission require the applicant to meet with the DEEP to get its advice on whatever permits are needed and to ensure what they want to do on the site is consistent with DEEP guidelines.

Solli has said the DEEP has been involved throughout the process and his client has all of the DEEP permits he needs to move forward.

Glass recommended that the commission request additional groundwater data near the fill, and for it to hire its own environmental professional.

“It is my opinion without acceptable answers to these questions and the data, when the information is unavailable to you — I recommend you deny the application without prejudice,” Glass said.

“We took a lot of copious notes and will address all those comments and concerns, including followups from commissioners,” Solli said.

The hearing was continued to Jan. 6.

Solli Engineering shared a statement from WSP, an environmental firm, stating it did not identify conditions on the site to indicate the presence of a source of contamination to groundwater or the onsite wetlands.

“Evidence of the presence of contaminated materials was not identified within discrete stockpiles,” the statement continues. “In addition, the stormwater and groundwater fed surface water body at the Site did not exhibit any evidence of impacts.”

Darrick Jones, the licensed environmental professional for the applicant, also answered questions about the groundwater quality on the site. He said levels of metals naturally occurring in groundwater were not unusually high.

Glass said the applicant should do leaching testing, but Jones said they are not required to.

During the public comment portion of the hearing, Lois Spence, who is vice chairwoman of the Inland Wetlands Commission, speaking for herself as a citizen, said the Planning and Zoning Commission owes it to the town to protect the water supply.

She recommends that the commission hire its own licensed environmental professional for the application and that a leaching test be done. 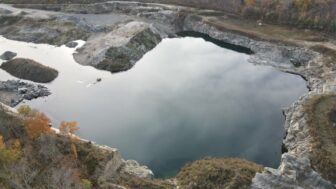 A large hole at 64 Cambridge and 4 Independence drives is filling up with stormwater. The plan is to dewater it, fill it with material, and compact it so it can support buildings.

At the last meeting, Leon Ambrosey, a commissioner, had asked about the DEEP investigation of complaints over activity on the site. He recalled how Warren told the commission that the DEEP does not close investigations, saying there is just enforcement or no enforcement.

However, Ambrosey said he checked with someone at DEEP, who told him they do an investigation and a report is sent to the Enforcement Department, which decides whether or not to pursue enforcement actions.

Amrbosey said he had a problem with Warren’s previous answer.

“I said they rarely close complaints,” Warren said. “I didn’t say never. I know my credibility has been questioned, but I know hundreds are not closed out. I would say most of their complaints. If I said all, I misspoke. I’m sure they closed some.”

Ambrosey asked Warren if the DEEP requested information on fill brought to the site when it was owned by New England Materials.

“Arnold Karp is not New England Materials,” Warren said. “He doesn’t have the reports. We requested it from the prior owner.”

“So the investigation is still ongoing?” Ambrosey asked.

“I never said it was closed, did I?” Warren replied.

Vice Chairman Bruno Maini asked Solli if he was the engineer for the previous owner and Solli said yes. Maini noted how earthwork on the site went beyond what was supposed to be done there.

Solli said the site became an un-permitted quarry after New England Materials no longer needed Solli Engineering’s services, then materials were brought onto the site between that time and Karp buying the adjacent properties.

“We have done all of the testing on site,” Karp said. “New England Materials was the prior owner. I requested any and all materials it had on that site. Through that testing, we found nothing that is a problem.”

Domenic Paniccia, a commission alternate, asked Town Planner Rick Schultz if New England Materials did quarrying and if it was illegal. Schultz said yes to both questions.

“Were they ever fined?” Paniccia asked, when Schultz said no, Paniccia said, “why not?”

“The other company made money quarrying illegally,” Paniccia said. “That money should come back and fix this site.”

“Mr. Karp bought it and it continued to happen until we shut it down,” Ambrosey said.

“That is incorrect,” Karp said.

Schultz said the town issued a cease and desist order, but Karp said that was to stop blasting, which he said was not illegal activity because there were still active permits.

In a previous approval for office buildings, Solli said the permits were still good until March of 2020.

During the public comment portion of the hearing, Karen Burnaska, who is chairwoman of the Conservation Commission, said her commission had received a complaint in 2019.

“We went out in the snow and you could see piles of the stuff,” she said of materials taken from the ground. “What was put in? What was taken out and what profit was made?”

The Sun later asked Karp about a Rockhead contractor price sheet for the “Monroe Quarry” at 64 Cambridge Drive with an effective date of May 10, 2019.

“How else was I going to get rid of the piles that were sitting there?” Karp said of selling off the stone materials.

Karp has always maintained that his goal is to remediate the site, fill in the massive hole and prepare it for new development that will benefit the town.