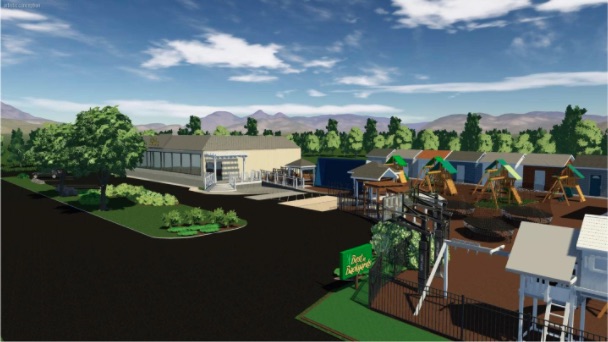 Best in Backyards Monroe, a division of Eastern Jungle Gym, plans to make changes to the property at 615 Main St. to make way for its new location. This computer rendering by Solli Engineering shows how it will look.

MONROE, CT — Planning and Zoning Commission members unanimously approved Best in Backyards Monroe’s application to renovate the Woodmarket building at 615 Main St., before relocating there from its current location at 391 Main St.

The owner of the Woodmarket will continue to operate his store until Best in Backyards, a division of Eastern Jungle Gym, is ready to move in.

“We’re excited that we’ve got an existing business in town that’s been doing well, and we have an opportunity to further cement their footprint in the community,” Kevin Solli, founder and principal engineer of Solli Engineering in Monroe, told the commission during his presentation of the site plan at a hearing last month.

The plan includes improvements to the parking lot and the creation of an additional outdoor display area on the 1.4 acre site, which has two curb cuts to Main Street (Route 25). The parking lot will have a one-way entrance and egress to improve traffic flow. 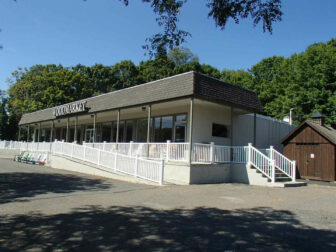 An elevated sidewalk and ADA ramp in front of the building at 615 Main St. in Monroe will be removed from the front facade to make more room in the parking lot. Field Card photo

To make more room for the front parking lot, the developer will eliminate the elevated sidewalk and ADA ramp. The front doorway will be removed and relocated to the northern corner of the building, where there will be a new deck, new stairs and a new ADA ramp, near a handicapped parking space.

Patio pavers from the business will be incorporated into the design of a small sidewalk adjacent to the building.

The rear parking lot will be expanded and a retaining wall built off the northwest side of the building. An outdoor display area will be surrounded by different types of fencing material Best in Backyards sells.

The vast majority of the pavement will be removed for the display area, which will appear like a level backyard. In all, the site will have a 6,400-square-foot reduction in impervious surface.

The building will continue to use the same gas and electrical services and the existing outside lights, which are Dark Sky complaint. The three light poles, which have recessed lighting, will be relocated to better illuminate the driveway and parking lot.

Town Planner Rick Schultz noted how the commission had previously approved two text amendments to make way for the site plan application, which he said “is well organized in its clean approach.”

Schultz also said the Architectural Review Board was pleased with the quality of the materials being used for the project.

“All in all, it’s an upgrade to the site and well thought out and organized,” he said.

Solli said traffic for this use is “very minimal,” adding it does not require as much parking as a normal retail location.

Best in Backyards will only use the Main Street site as a display location for customers to see what it has to offer, then place orders for deliveries to their homes. There will not be a steady stream of truck traffic from the Monroe store, because deliveries will be made directly from companies and warehouses, according to Solli.

He said DOT permits will be required, so the state agency will be doing a review of the project.