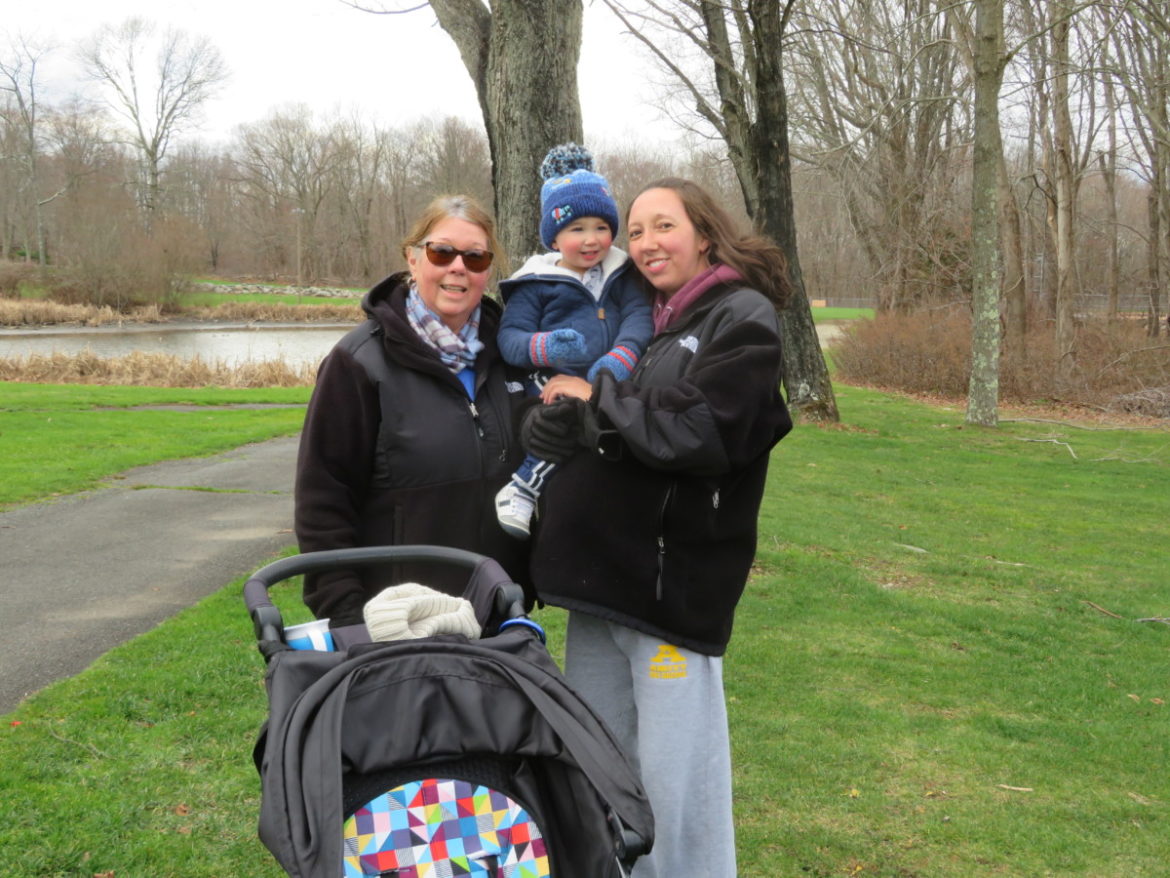 Karen Musante, left, took a walk at Wolfe Park Wednesday with, from left, her grandson Michael, 1, and her daughter, Christy Davis.

MONROE, CT — Karen Musante was bundled up for the cold weather, while taking a walk at Wolfe Park with her daughter, Christy Davis, and her one-year-old grandson, Michael, Wednesday morning.

“We always walk here. We live nearby,” Musante said, while pushing an empty stroller. She looked over at Michael, as the toddler ran ahead of his mother. “He loves the decorations — the snowmen and the deer,” she said. “They do a great job of keeping the park and the pathways clean.” 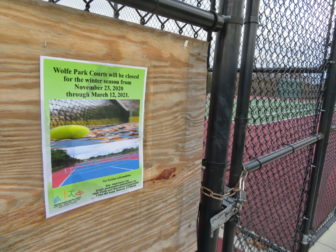 The tennis and pickleball courts at Wolfe Park are locked up for the winter.

“We may have limits on what we can do, but our park never closed during this entire pandemic,” Orosz said. “We may have had to have a delays or modifications for some things, but it has been open and still is.”

She said the park had only closed for one week, after Tropical Storm Isaias struck with heavy winds that toppled trees and knocked out power.

Musante said her family usually goes to the one of the playgrounds, so Michael can play on the swings, but have not since the pandemic struck.

However, Orosz said the playgrounds are still open.

Other facilities, such as the tennis and pickleball courts, are not, leading to a few calls from residents to ask why. The gate was locked Wednesday and signs informed visitors the facilities are closed for the winter season, from Nov. 23 to March 12, 2021.

Orosz said this has nothing to do with COVID.

“We take the nets down at the courts every winter,” she said. “It’s part of our routine maintenance. It saves the integrity of those nets.”

Orosz and her staff will work to ensure the courts are ready for the spring, when Masuk High School’s tennis season should get underway. 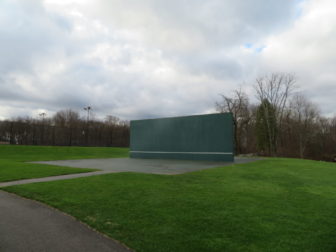 The ball wall area will allow tennis and pickleball players to practice their strokes this winter.

“We have a huge tennis program in the summer for youths and adults,” she added. “Greg Sansonetti has run it for us for the past 20 years. He’s great with the kids.”

Those who still want to hit a tennis or pickleball can use the wall ball area nearby.

The basketball rims and nets were also taken down for the winter.

There are no rentals of picnic areas at this time and the bathrooms at Great Hollow Lake were winterized, though a portable toilet is available, Orosz said, adding, the bathroom on the patio by the pool entrance is still open.

Still plenty to do

Both sides of the park are open to visitors from 7:30 a.m. to 4:30 p.m., though sunset hours will soon shorten the days.

Despite restrictions from Reopen Connecticut Guidelines due to COVID, Orosz said the park is still an ideal place for hiking, walking, jogging and riding bikes on Rails to Trails, as well as bird watching.

The guidelines restrict groups to no-more-than four people, but Orosz said friends can maintain a distance of six-feet while playing Frisbee or catch.

She said she has seen some seniors sitting in chairs, six feet apart and wearing masks, while talking and knitting, enjoying the fresh air, the company and a change of scenery.

Children play on playground equipment, before their parents clean their hands with sanitizing wipes, Orosz said of another familiar scene.

“Our holiday lights are up, so people can drive in,” she said of the display.

Though the pandemic temporarily made most people work from home, while closing down many businesses, Orosz and her staff managed to keep Wolfe Park and Great Hollow Lake vibrant.

For example, Monroe was one of few towns to open its pool this season. The town had also opened the beach at Great Hollow Lake. The pool was open from July 5 until Labor Day with reservations required for a maximum of 70 people per session.

“It may not have been the times people wanted or have accommodated as many people, but our staff did the best we could to keep the pool open and run our programs,” Orosz said.

The gate for the beach was open from 10 a.m. until 7 p.m., weather permitting. Orosz said visitors were just asked to social distance.

Monroe also had camp sites available at Webb Mountain Park from June 12 through Nov. 14. “That was a great place for families to have a mini-vacation with social distancing activities,” Orosz said.

The Monroe Parks and Recreation Department had rolled out a modified concert series and had a successful Summer Fun Days Camp with its own set of modifications, according to Orosz.

Though there were still activities, she said it was not without limitations on some programs and cancelations of others.

“It was the most difficult summer parks and recreation directors have seen in their lifetimes — and hopefully we’ll never see anything like it again,” Orosz said.

Parks and recreation staffers worked closely with representatives of youth sports programs to approve permits, and juggle schedules for practices and games — amid ever changing state guidelines.

Orosz said all were great to work with, including Ryan Driscoll of Monroe Little League, Rick Henderson of Monroe Lions youth football and cheer, Kery Fulchino with the Monroe Soccer Club, and James Crawford with AYSO Soccer.

“A lot of people worked hard this year. Our common goal was to make sure everyone one of those kids got on the field and played their games safely,” Orosz said. “It was a wonderful season for everybody, even through it was an abbreviated season.”

Parks and recreation also had youth golf, fall tennis and a preschool soccer program with 46 kids.

“We had a lot of virtual, online winter programs, because of no access to school facilities this year,” Orosz said. “Because of COVID, swimming and youth basketball is not happening right now.”

“We ask everyone to go on our website for any updates and to sign up for our email blasts,” Orosz said.

Monroe Parks and Recreation has scheduled a lineup of activities, including a virtual gingerbread contest, a contest where participants guess how many M&Ms are in a jar and a holiday version of Jukebox Bingo.

Orosz said the elves in the Monroe Parks and Recreation Department will be sure to remind St. Nick to write back to young participants in this year’s Letters to Santa program. “We’re trying to be creative,” she said.