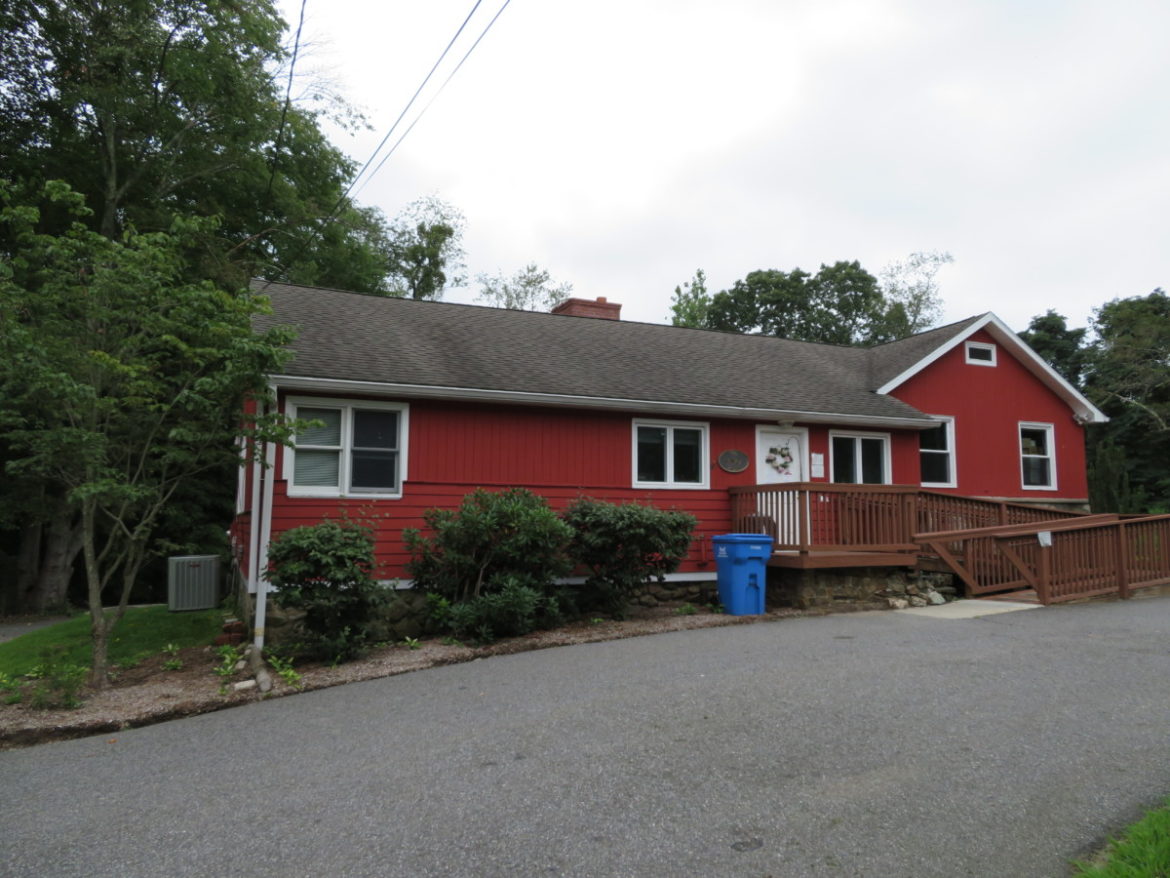 The Monroe Food Pantry operates out of an old house at 980 Monroe Turnpike.

A Wiffle Ball tournament on Sept. 21 will raise money for the Monroe Food Pantry, but teams of five-to-eight players, umpires, scorekeepers and sponsors are still needed.

“We expect David Mullany, president of The Wiffle Ball Inc., to throw out the first pitch. He is a Monroe resident,” said John Murphy, one of the organizers of the tournament.

Tournaments for three leagues will end with an awards ceremony. The rain date for the event is Sept. 22.

According to the Connecticut Food Bank, Monroe has a population of 19,784 people of which 6.7 percent are “food insecure” and 3.6 percent are living at the poverty level.

The Senior citizen team fee for those age 62 and older is $40. Teams may be coed and each must have one adult age 18 or older. The Wiffle Ball rules are here or visit the Wiffle Ball Tournament post on the Monroe Food Pantry’s Facebook page for rules and tournament schedules.

To register, follow this hyperlink for a team form. A child registration form is here. The deadline to register is Sept. 10.

“We have asked someone to make some PVC strike zones for us,” Murphy said. “This will let us avoid using folding chairs as strike zones.”

“We need an umpire and scorekeeper for each of the six fields,” Murphy said.

Tomchik said the fundraising committee is grateful for its sponsors, Newtown Savings Bank and Jensen Tire, Auto & Marine, though more sponsors are needed.

“We are hoping to get about ten $100 ones,” Murphy said. “Their logos would be on the event program.”

Those interested in being a sponsor, umpire or scorekeeper should email the Monroe Food Pantry Fundraising Committee at [email protected] or call Food Pantry Coordinator Kathleen Turner at 203-452-2817.

The Monroe Food Pantry operates out of a red 1,900-square-foot split-level house at 980 Monroe Turnpike, which was built by Alex Sowchuk in 1949. It has eight rooms, three bedrooms, two baths, a stone fireplace and a two-car-garage underneath.

“The style is more reminiscent of a European farmhouse,” said Tomchik. “There is nothing mid-century modern about it. The basement is a working man’s basement equipped with a bathroom for cleaning up.”

Tomchik said the town bought the house and surrounding 10 acres of land in 2001 for $485,000. Much of the land was used to extend the fields and parking at Masuk High School, she added.

“We have a staff of 40 volunteers, who have put in 1,500 hours from January to
June of this year,” Tomchik said of the food pantry. “The town maintains the physical building and pays the food pantry director’s salary, which amounts to $42,000 a year. Everything else comes from public support. Even the seven freezers and four refrigerators were donated.”

Food Pantry Coordinator Kathleen Turner makes two big shopping trips per month at an average cost of $1,400 per trip, Tomchik said, adding the money comes from private donations and fundraising events and is used to buy perishable and non-perishable items the pantry does not receive from donations.

Among those items are bread, milk, produce and holiday meat.