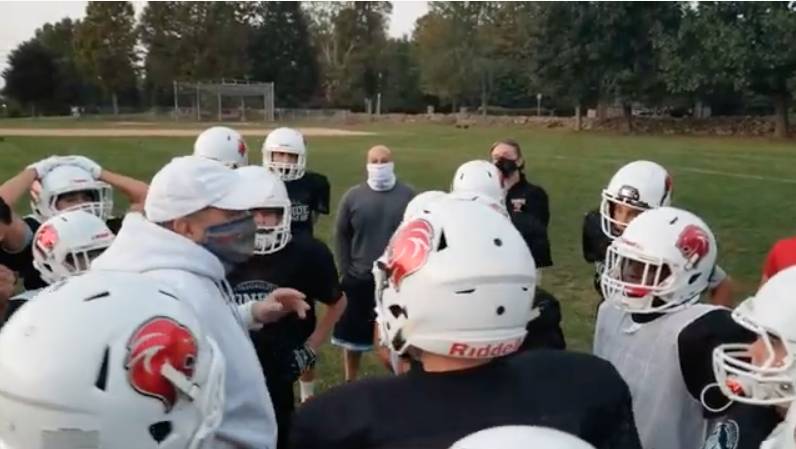 The search for Masuk High School's next head football coach is still wide open, but a number of parents are lobbying for Steve Christy, who has had a storied career as a football coach, most recently with the Monroe Lions.

Lato had been Masuk’s coach since the 2014-15 season and his teams combined for 42 wins and 23 losses during his tenure. The Panthers best season under Lato was 2017-18, when his team was a Class L runner-up.

“He did a really great job for us,” DeGennaro said, adding Lato still teaches STEM in the school district.

A hiring committee is assisting DeGennaro on the search for Masuk’s next coach. He said the goal is to have a new coach in place when practices start in August.

“We want a coach for our student athletes as soon as we can, without rushing the process,” DeGennaro said. “I’m sure we’re going to get some really qualified candidates and I’m confident we’ll get someone great for the student athletes in our program.”

A number of parents whose children played youth football for the Monroe Lions already have someone in mind, and they have been lobbying to get him.

Mike Putnam reached out to The Sun to sing the praises of Steve Christy, a longtime Lions coach, who served two stints on Masuk’s coaching staff, including as offensive coordinator under Coach Lato the season they lost to Hand in the State Finals.

“I think he’s got a proven track record of developing kids, and with that development, he brings an inspiration to win,” said Putnam, whose son, Ryan, played on Christy’s teams for three years. “I think the kids really respond to the approach he takes to coaching.”

He is not alone in his advocacy of Christy.

“I can tell you with almost certainty that every parent of the eighth grade team is pushing for this coach,” said Robert Saraco, whose son played for Christy. “A lot of the sophomore kids would love to see him coach too.”

When reached for his reaction to parents’ support of his candidacy, Christy declined an interview to avoid influencing the coaching search.

Christy coached the Monroe Lions youth football for over 20 years. Aside from his experience at Masuk, his high school career includes stops as offensive coordinator for Stratford and Harding. Harding reached the States in two-of-three seasons he was there, averaging 35 points a game.

After a brief retirement from coaching, some parents talked Christy into coming back to coach for the Monroe Lions again. He coached the last three years, leading a team of players when they were in sixth, seventh and eighth grade. His first year, the Lions lost only two games, and in the last two seasons they were undefeated, according to Saraco.

“He didn’t have any kids on the team,” Saraco said. “He had no stake in the game whatsoever. He was just there for the kids, which says a lot.”

Saraco, who was a member of Christy’s coaching staff, said the Lions seventh-grade team won the Shoreline Championship, then in eight grade they went undefeated, but had no playoff games because of COVID.

“We beat everybody by 30,” Saraco said. “The last two years, we pretty much couldn’t score after halftime, because we were up by so much. You can’t be up by more than 35 points or the coach will be suspended.”

Saraco said Christy is able bring his kids together as brothers. “They’re a family on that field,” he said. “Everybody’s working together and taking care of each other, so to speak.”

Bouton said Christy has a team first mentality and all of the kids are on board. “There was never any squabbling, infighting or any of that stuff on our sidelines when he coached,” Bouton said. “The culture he creates in his program, in my opinion, is unsurpassed.”

Bouton remembers watching Masuk football games on the sidelines with his son years ago, and seeing how the offense responded when Christy called the plays.

“The minute he showed up, they were right back to the way he coached them in their youth,” Bouton said. “The tempo increased. The energy on the sideline increased. It was the personal connection he had to everyone of those players. Success is a byproduct of the way Steve runs his team. Everybody talks about the x factor, the secret sauce. Steve has it.”

“When Steve’s close to the game of football, the team that’s closest to him benefits the most, because he goes all in,” Putnam said. “He’s going to give everything he can every hour of every day. I’ve received calls from him, sharing thoughts on the team. He eats, sleeps and breathes football. His effort towards coaching comes through in the players’ effort. It’s all contagious.”