MONROE, CT — Police are investigating a rash of incidents, in which unlocked motor vehicles are being entered by thieves. In two cases, vehicles with the keys left inside were stolen.

In an effort to reduce the number of thefts, the Monroe Police Department reached out to residents in a Facebook post.

“We’ve posted this several times in the past few years, but we’d like to remind everyone once again to lock your car doors and take your keys with you,” police wrote. “Don’t leave valuables such as purses, wallets and electronics in your vehicle. It doesn’t matter whether the car is in your driveway or in the street; lock your doors. The entire region, Monroe included, continues to be targeted by car thieves.”

“Vehicle’s that are unlocked are rummaged through and valuables are taken,” the message continued. “Those that are unlocked with the keys inside are typically stolen. While everyone in town should abide by this advice, residents who live off Route 110 and Barn Hill Road should pay special attention as these areas of town continue to see the highest number of entered and stolen cars.”

“We’d like to remind the public to call us immediately if you hear or see any kind of suspicious activity,” police said. “We continue to patrol all areas of town and we have made arrests in many of these cases, but please don’t make it easy for these thieves; lock your doors.”

On May 22, a Hyundai Santa Fe with the keys left inside was stolen from Secret Hollow Road sometime overnight and recovered in West Haven later in the day.

Another vehicle theft was reported Tuesday morning, when an unlocked Honda CRV with the keys inside was taken from Barn Hill Road. The owner’s wallet was also left inside with cash, credit and debit cards, according to police.

Police said the stolen credit cards had already been used by later this Tuesday morning. The vehicle has yet to be recovered.

Officers also responded to reports of seven unlocked vehicles being entered on the east side of town in the overnight hours between May 22 and 23. Streets include Purdy Hill Road, Red Coat Lane, Carriage Drive and Moose Hill Road.

A vehicle fire on Main 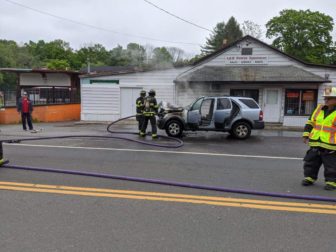 When a driver’s Kia Sorrento began to overheat on Main Street Monday morning, he pulled over in front of L&R Power Equipment and got out of his vehicle safely, according to police.

Stepney firefighters, who also responded to the emergency call, extinguished the fire, which was reported around 11:48 a.m. Bud’s Towing later removed the damaged vehicle.