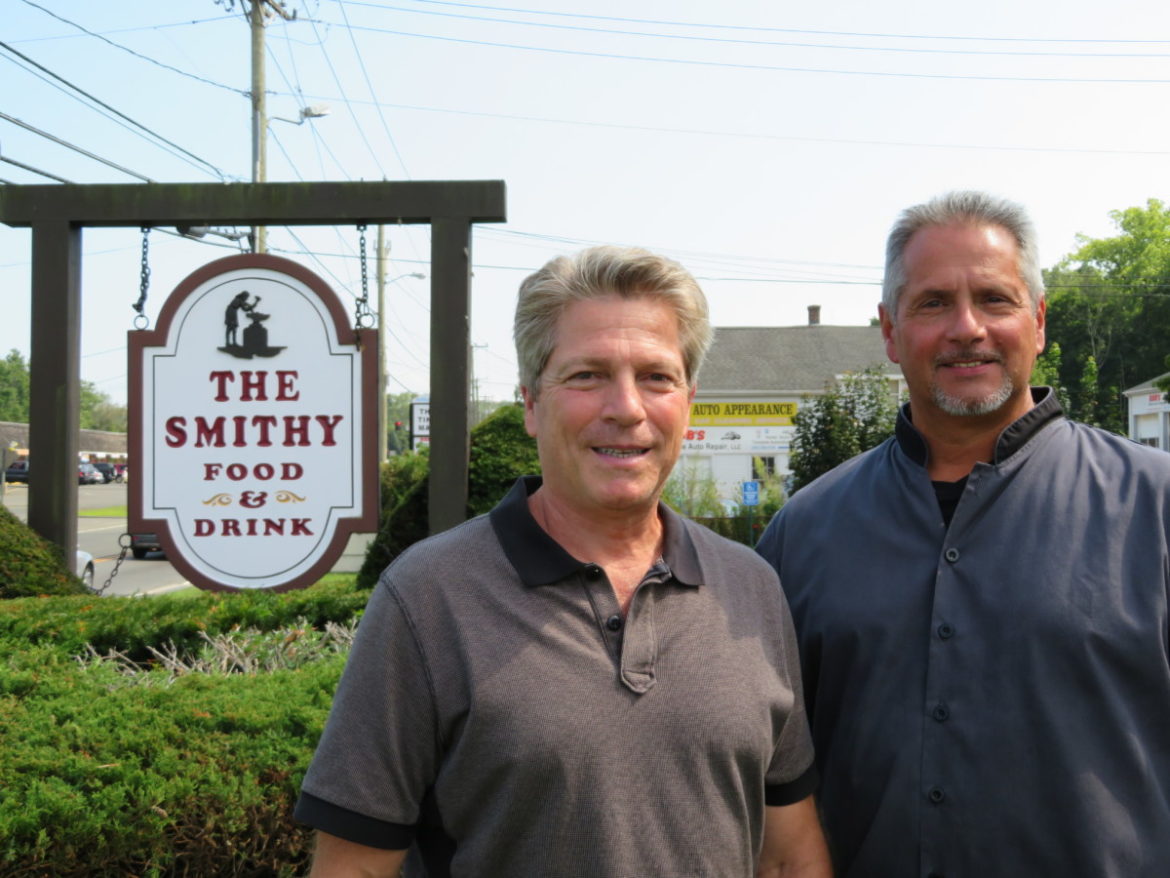 The Smithy has been serving dinner for 46 years and owners, from left, Frank Pelligra and Steve Scinto, plan to sell the business to someone who will keep it going strong.

Patrons have dined at The Smithy for the restaurant’s rustic atmosphere, steaks, chops and seafood for 46 years. The brown house and sign with a blacksmith logo at 171 Main St. has become a Monroe landmark.

Though the business and property are for sale, its owners say selling The Smithy to a buyer who will keep the restaurant going is a priority.

A rumor had spread on the Monroe CT Residents Facebook page that The Smithy was closing, upsetting many loyal patrons.

“We have very regular clientele. People have been coming here for generations,” said Steve Scinto, who owns The Smithy with Frank Pelligra. “It felt good hearing it expressed, how it means so much to people. It didn’t feel good to hear people say it was closing, because it’s the furthest thing from the truth.”

Pelligra’s family owns the property and its buildings and he and Scinto own The Smithy.

Jeff Foito, a commercial investment specialist with Coldwell Banker, is handling the sale of the property, with an asking price of $1.1 million. The 4,950-square-foot restaurant building was constructed in 1927 and a second building on the site is used for two rentals.

Foito said two potential buyers expressed interest, before having to pull out. In both cases, he said they planned to continue to operate The Smithy as is.

“That’s a priority,” Scinto said. “We’ve talked to many like-minded people who wouldn’t change a thing.”

“Anybody would want to mirror what they do, because how else could you run it as successfully?” Foito said.

Pelligra said they want to keep as much of their staff as possible, adding many worked at the restaurant for a long time. 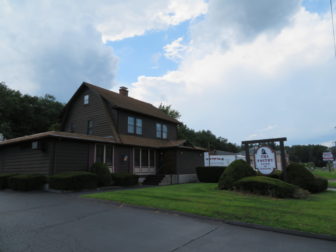 Built in 1927, the house that serves as The Smithy’s home has been a mainstay on Main Street for 92 years.

Frank Pelligra lived in the brown house at 171 Main St. years before his parents, Frank and Joyce, opened it as a restaurant in 1973. Pelligra and Scinto, who worked there growing up, took over The Smithy in 1991 and the business continued to thrive.

Pelligra said coming to The Smithy feels like home because of all the familiar faces, adding some customers say the restaurant, which has a fireplace and no TVs, also makes them feel at home.

Scinto said the filet mignon is the most popular dish, as well as The Smithy’s signature lobster tail. Patrons also enjoy the salad bar and cheese block.

Scinto said The Smithy rarely advertised over the years, instead thriving from its reputation and word of mouth.

“Our emphasis has always been on high quality, along with value — good, quality food made simply,” he said.

Pelligra bartends and “conducts the orchestra” in the front end of the restaurant, while Scinto works in the kitchen, cutting all the steaks, buying and preparing all the food and setting the menu and all the specials.

Pelligra said the menu rarely changes, because The Smithy’s patrons like things the way they are.

“Steve will change a salad dressing and we’ll have a riot,” he said with a laugh. “People want things to be the same.”

Is that the Pope? 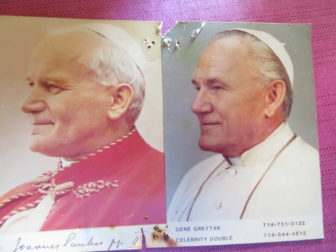 Trumbull native Eugene Greytak, right, a celebrity double who impersonated Pope John Paul II, once had dinner at The Smithy.

When Scinto and Pelligra retire, they’ll leave many fond memories of their restaurant.

Among its earliest customers were nationally known ghost hunters, Ed and Lorraine Warren.

“The Warrens were customers since the early 70’s,” Scinto said. “They were good customers. We all were on a friendly basis.”

“We had a pope impersonator eat here,” Pelligri said of Gene Greytak, a celebrity known for impersonating Pope John Paul II. “One woman looked over at him and almost passed out,” Pelligri added with a laugh.

Greytak played as the pontiff in the movies “Sister Act” and “Naked Gun.”

The Smithy hosted three small weddings over the years and Rural Gas used to have its Christmas party at the restaurant. One year in the 70’s, a man named Jack Daniels, who was president of the East Coast Packard Club, talked the owners into hosting their event. 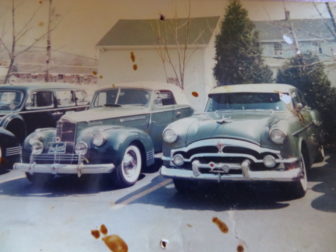 Packards filled The Smithy parking lot during an East Coast Packard Club party in the 1970s.

“The parking lot was filled with classic Packards,” Pelligri said of the old cars.

“We have photos on the wall by the bathrooms that have been hanging the whole time,” Scinto said. “There’s business cards, photos and newspaper clippings.”

He showed a black and white photo a customer gave them of The Smithy when it was used as a residential home in 1930.

Pelligri said they have served three generations of patrons over the years, making friends along the way.

Scinto added, “we watched couples come in on dates, then get married and now they have children and grandchildren.”

Pelligri and Scinto both said the people are what they will miss most, from the customers and staff members to the vendors and salespeople.

Aside from ensuring The Smithy will still be run as a restaurant, Pelligri said it is also important to keep the name, adding, “if I leave town for five years and come back, I want it to be The Smithy.”